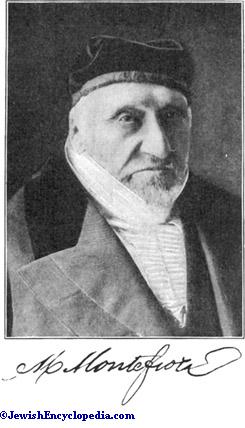 Montefiore on his 100th birthday.

Sir Moses Haim Montefiore (October 24, 1784-July 28, 1885) was one of the most famous British Jews in the nineteenth century. Montefiore was a financier, stockbroker, philanthropist and also the Sheriff of London.

Montefiore was highly respected and was received warmly by kings and diplomats throughout Europe. A devout Jew and defender of the Jewish position, he was a mediator and intercessor on their behalf. He was a philanthropist and devoted worker for the public welfare, especially benifitting his fellow Jews. Open hearted and open minded, he embraced Jew and Gentile alike.

Born in Livorno, Italy, in 1784, Moses Montefiore began his career as an apprentice to a firm of grocers and tea merchants. He later left for London, and become one of the twelve "Jew brokers" in the City of London. There he went into business with his brother Abraham, and their firm gained a high reputation.

On June 10, 1810, Moses Montefiore married Judith Cohen (1784-1862), daughter of Levi Barent Cohen, considered to be the wealthiest Jew in England, and probably the world. Her sister, Henriette (or Hannah) (1791-1866), married Nathan Mayer Rothschild (1777-1836), for whom Montefiore's firm acted as stockbrokers. Nathan Rothschild headed the family's banking business in Britain, and the two brothers-in-law became business partners.

This was the wedding of an Ashkenazi, or German, Jew to a Sephardic, or Spanish Jew. By the time Judith died, on September 24, 1862, they had shared more than 50 years together. "Moses' marriage to Judith was the most important event in his life. They shared the devoted care in the observance of the practices and customs of their religion. She became the inspiration behind his bold and perspicacious missions that made him a major figure in Jewish history, rather than merely a wealthy financier, and shared all the risks and dramas in travelling abroad."[1]

Montefiore retired from his business in 1824, and used his time and fortune for communal and civic responsibilities.

Physically imposing at 6 ft. 3 in., Montefiore enjoyed enormous prestige. He was elected Sheriff of London in 1837 and served until 1838. He was also knighted that same year by Queen Victoria and received a baronetcy in 1846 in recognition of his services to humanitarian causes on behalf of the Jewish people.

Though somewhat lax in religious observance in his early life, after his first visit to the Holy Land in 1827, he became a strictly observant Jew. He was even in the habit of traveling with a personal shohet (ritual slaughterer), to ensure that he would have a ready supply of kosher meat. His determined opposition played an important role in limiting the growth of the Reform Movement in England.

After retiring from business in 1824 at the age of forty, Montefiore devoted the rest of his exceptionally long life to philanthropy and good deeds.

He was president of the Board of Deputies of British Jews from 1835-1874, a period of 39 years, the longest tenure ever.

At the age of 40, he was able to retire from the City of London, where he worked closely as a broker with his brother-in-law, Nathan Mayer Rothschild. In his business life he was an innovator, investing in the supply of piped gas for street lighting to European cities via the Imperial Continental Gas Association. He was among the founding consortium of the Alliance Life Assurance Company, and a Director of the Provincial Bank of Ireland. Highly regarded in the City, he was elected as Sheriff of the City of London in 1836, in which capacity he was knighted by Queen Victoria in 1837.

From the time of his retirement until the day of his death, he devoted himself to philanthropy and alleviating the distress of Jews all over the world. He presided over the community in England for decades. The details of his journeys overseas are relatively well-known—to the Sultan of Turkey in 1840 to liberate from prison ten Syrian Jews of Damascus arrested after a blood libel; to Rome in 1858 to try and free the Jewish youth Edgardo Mortara, baptised by his Catholic nurse and kidnapped by functionaries of the Catholic Church; to Russia in 1846 and 1872; to Morocco in 1864 and to Romania in 1867. In every case he went armed with the full panoply of British Victorian diplomacy. While history debates the practical efficacy of these trips, they were indisputably the forerunners of Jewish representation across borders for the welfare of Jewish communities in distress. It was these missions more than anything which made him a folk hero of near mythological proportions in the depressed Jewries of Eastern Europe, North Africa, and the Levant.

Little is known about his public and political life in general Victorian society. Indicative of his civic and society standing, Montefiore is mentioned in Charles Dickens' diaries, in the personal papers of George Eliot, and is even mentioned in James Joyce’s "Ulysses." It is known that he had contacts with non-conformists and social reformers in Victorian England. He was active in public initiatives aimed at alleviating the persecution of minorities in the Middle East and elsewhere, and he worked closely with organisations that campaigned for the abolition of slavery. A Government loan raised by the Rothschilds and Montefiore in 1835 enabled the British Government to compensate plantation owners and thus abolish slavery in the Empire. 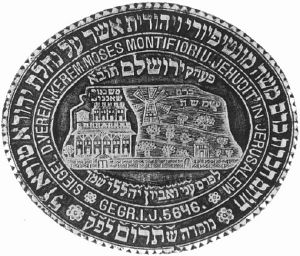 Seal of Montefiore purchasing the land

Montefiore's one–hundreth birthday was celebrated as a national event in his native Britain, by the Jewish community in Palestine, and by Jews throughout Eastern Europe and the Middle East. His birthdays, his activities, and certainly his passing, drew considerable comment in the British press of the time.

Montefiore’s life was also inextricably bound up with the city of Ramsgate, Kent, on the southeastern coast of England. In the 1830s he and Judith had bought East Cliff Lodge, a country estate then adjacent to the town, very much in the manner of the Victorian Jewish gentry. He played a huge role in the affairs of Ramsgate and one of the local ridings still bears his name. In 1873 a local newspaper mistakenly ran his obituary. "Thank God to have been able to hear of the rumour," he wrote to the editor, "and to read an account of the same with my own eyes, without using spectacles."

The town celebrated his ninety–ninth and his one–hundreth birthday in great style, and every local charity, and church benefited from his philanthropy. At East Cliff Lodge he established a Sephardi Yeshivah, The "Judith Lady Montefiore College," after the death of Judith in 1862. In the grounds of the house he built a beautiful and ornate Italianate synagogue; next to it he built a mausoleum modeled on Rachel’s Tomb outside Bethlehem (whose refurbishment and upkeep he had paid for). There in 1862, Judith was buried; and there in 1885 he too was laid to rest. In recent years there has been controversy over efforts by real estate developers to destroy his and his wife's graves to build a commercial site, in spite of his strongly expressed desire that his grave be preserved.

The well-known Montefiore Medical Center in the Bronx, New York is named for him. Within the Hospital's East wing second floor, there is a bust of Montefiore.

It was the Holy Land that was dearest to Montefiore's interests. Montefiore deeply loved Eretz Yisrael and believed in its messianic restoration through Divine Providence as opposed to the large-scale, planned development of the country as the solution to the Jewish problem.[2] 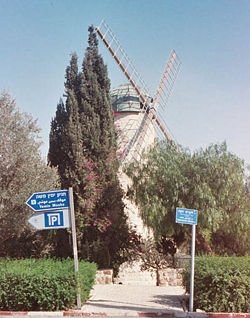 Accompanied on several of the trips by Judith, a lady of delicate health, he made his way by carriage and ship to the Land of Israel no less than seven times—the first time in 1827, and then in 1838, 1849, 1855, 1857, 1866, and 1875. He was 91 years of age when he made his last trip. He dispensed liberal philanthropy to many supplicants, but always sought to promote industry, education, and health. Montefiore’s indelible mark on the Jerusalem landscape is, of course, the windmill and adjacent cottages and almshouses opposite the Old City, built by him as the executor of a fund left by the American Jewish pioneer Judah Touro. The project, bearing some of the hallmarks of nineteenth–century artisanal revival, aimed to promote productive enterprise in the Yishuv. The builders were brought over from England. Unfortunately, because of flaws in construction, the windmill has never worked.

This was part of his larger program of attempting to enable the Jews of Palestine to become self supporting in anticipation of a messianic restoration of a Jewish state. In addition to the famous windmill, he introduced a printing press and textile factory, and inspired the founding of several agricultural colonies. He also attempted to acquire land for Jewish cultivation, but failed to so, because Ottoman law limited the sale of land to non-Muslims.

However, Montefiore was instrumental in expanding the city of Jerusalem out of its ancient Old City walls. Following a terrible cholera outbreak in Jerusalem in 1861 due to overcrowding, Montifiore helped establish Yemin Moshe (Hebrew: the Right hand of Moses), one of the first neighborhoods beyond the city walls. As the area was highly dangerous at the time, poorly policed and overrun by bandits, he also offered financial inducement to encourage poor families to move. Later on, Montefiore also helped established the two Knesseth Yisrael neighborhoods—one for Sephardic Jews, one for Ashkenazi—which were even further from the walls of the Old City.

A major source of information about the Yishuv, or Jewish community in Palestine, during the nineteenth century is a sequence of censuses commissioned by Montefiore, in 1839, 1849, 1855, 1866 and 1875. The censuses attempted to list every Jew individually, together with some biographical and social information, such as their family structure, place of origin, and degree of poverty.

Although he only spent a few days in Jerusalem in 1827, this visit changed his life. He resolved to increase his religious observance and to attend synagogue on Saturdays, Mondays, and Thursdays. And indeed, while his observance of Jewish law was perhaps not strict in his younger years—the most often quoted evidence being Judith’s descriptions of the meals they enjoyed in inns all along the south coast of England on their honeymoon in 1812—from that time on he lived a life of dignified and devoted piety and observance.

For his philanthropy, the Jews of Palestine, and later Israel, referred to him as "ha-Sar Montefiore," or "Prince Montefiore." A popular song by that title was sung in the 1960s by Yehoram Gaon. 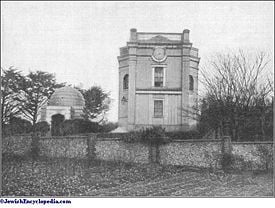 Synagogue and tomb of Montefiore, Ramsgate.

Montefiore died quietly in London on July 28, 1885, at the age of 101, having lived quietly in the last decade of his life. He was loved and respected by many, for such actions as liberating countless Jews from persecution, constructing hospitals, building schools, and numerous other endeavors.

Montefiore's companion and personal secretary, Dr. L. Loewe, wrote of his friend by saying, "Sir Moses had fought so sturdily in youth the battle of life, and afterwards devoted himself with such unwearying ardor to the task of combating hatred, persecution, and fanaticism, of severing the bonds of physical and moral slavery, and of aiding in the establishment of religious toleration all over the world. His unparalleled devotion to the sacred cause of humanity in general, and the unclouded halo of a spotless integrity which encircles his name, will ever afford a splendid example for emulation no less than the dauntless courage with which he set to work for the rescue of the suffering and oppressed." [3]