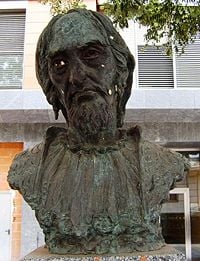 Statue of Moses de Leon in his hometown of Guadalajara, Spain.

Moses de Leon (c. 1250 – 1305), known in Hebrew as Moshe ben Shem-Tov (משה בן שם-טוב די-ליאון), was a Spanish rabbi and Kabbalist who is believed to be the author or redactor of the mystical work known as the Zohar, considered the most important book of Jewish mysticism. For several centuries after its publication this work was widely read and discussed. Its influence in the Jewish community was rivaled only by the Hebrew Bible and the Talmud.

Moses de Leon was born in Guadalajara, Spain, his surname deriving from his father, Shem-Tov de León. After 30 years living in Guadalajara and Valladolid, he moved to Ávila where he lived for the rest of his life. In addition to the Zohar, de Leon wrote several other books on mystical themes. He died at Arevalo, in 1305, while returning to Ávila.

Following his death, over the next four centuries, the Zohar had enormous impact on the Jewish community, stimulating great interest in mysticism and provoking harsh criticism. Conservative rabbis objected to its other-worldly concerns and its appeal to what they considered legend and superstition. It is a matter of controversy whether the Zohar is an original work by Moses of Leon, or as he himself claimed, he worked from ancient manuscripts dating back to the second century and Rabbi Shimon bar Yochai.

The Zohar was also popular among some Christian readers of the period. They held the belief that it confirmed certain Christian doctrines such as the Trinity and the Fall of Man. Its readership diminished following the failed messianic movement of Sabbatai Zevi, which fed off of the kabbalistic fervor that the Zohar helped engender. The Zohar became influential again through the re-emphasis on mystical ideas by Hasidic Judaism, and has recently found new readership among modern students of the Kabbalah.

Writings in his own name

A serious student of the mystical tradition, Moses de Leon was familiar both with the philosophers of the Middle Ages and the whole literature of Jewish mysticism. He knew and used the writings of Shlomo ibn Gabirol, Yehuda ha-Levi, Maimonides, and others. His writings display the ability to charm his readers with brilliant and striking phrases, conjuring mystical feelings among many who encounter them.

Moses was a prolific writer and composed several biblical commentaries and kabbalistic works in quick succession. In the comprehensive Sefer ha-Rimon, written under his own name in 1287 and still extant in manuscript form, he treated the purposes and reasons for the Jewish ritual laws from a mystical standpoint, dedicating the book to Meir ben Todros HaLevi Abulafia. In 1290, he wrote Ha-Nefesh ha-Hakhamah, also called Ha-Mishqal (published in Basel, 1608, and also frequently found in manuscript), which shows even greater kabbalistic tendencies. In this work he attacks the scholastic philosophers of religion and deals with a range of mystical subjects, including:

His Shekel ha-Kodesh (1292) deals with similar themes, while in the Mishkan ha-Edut also called Sefer ha-Sodot, finished in 1293, he deals with heaven and hell, basing his view on the apocryphal Book of Enoch. Here, he also treats the subject of atonement. He also wrote a kabbalistic explanation of the first chapter of Ezekiel, a meditation on the heavenly throne-chariot of God, in the tradition of so-called Merkabah mysticism. 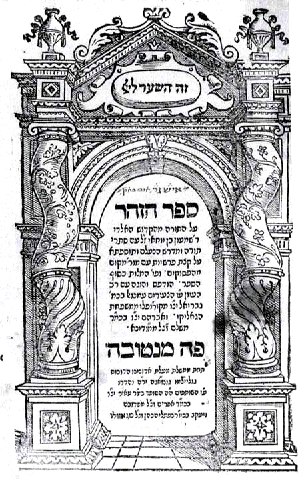 Title page of first edition of the Zohar, Mantua, 1558. Library of Congress.

Toward the end of the thirteenth century, Moses de Leon wrote or compiled the Zohar, a kabbalistic midrash (commentary) on the Pentateuch, full of esoteric mystic allegories and rabbinical legends. This work he ascribed to Shimon bar Yochai, the great saint of the tannaim (the early rabbinical sages of the Mishnah).

The work, written in a peculiar form of Aramaic, is entitled Midrash de Rabban Shimon bar Yochai but it is much better known as the Sefer ha-Zohar, the Book of Splendor. The book aroused considerable suspicion at the outset regarding its supposed authorship. Moses de Leon himself claimed that he had copied it from an ancient manuscript of Shimon bar Yochai, but its Aramaic seems reconstructed, and many of its unique phrases are found nowhere else but in Moses de Leon's other works. These and other factors have led modern scholars to the consensus view that it is, for the most part, Moses de Leon's own work.

A contemporary tale from shortly after Moses' death tends to confirm this view. The story runs that after the death of Moses de Leon, a rich man from Avila offered Moses' widow, who had been left without considerable means, a large sum of money for the ancient text her husband had used to compile the work. She, however, confessed that her husband himself was the author of the book, which he had composed without reference to any ancient work other than the Hebrew Bible and well known traditional rabbinical texts. She claimed to had asked him several times as to why he had put his teachings into the mouth of another. He replied that if these doctrines were attributed to the famous, miracle-working Shimon bar Yochai, they would would be highly honored, and would also be a rich source of profit.

Despite this admission, many Jews insisted that Moses de Leon had indeed been in possession of now-lost ancient manuscripts. Others surmised that he was the recipient of ancient mystical oral traditions, or that he wrote the book under the inspiration of the spirit of Shimon bar Yochai and God Himself. 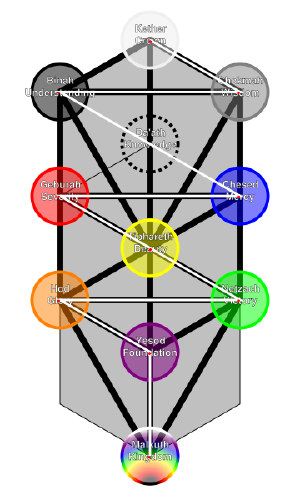 Diagram of the ten Sefirot, or emanations of God

The Zohar is based on the principle that all visible things have both an external, visible reality and an internal one, which hints at the reality of the spiritual world. Also, the universe consists of a series of emanations, though which humans can gradually ascend toward a consciousness of the Divine. It teaches that there are thus four stages of knowledge, beyond which lies a mystical experiential state. The four stages of knowledge are:

Beyond the stage of "knowledge through love" is the ecstatic state known to the great mystics through their visions of the Divine. This state is entered by quieting the mind and remaining motionless, with the head between the knees, absorbed in contemplation while repeating prayers and hymns. There are seven ecstatic stages, corresponding to seven "heavenly halls," each characterized marked by a vision of a different hue.

The Zohar teaches that man can be glorified and divinized. It rejects the view of Maimonides and others, who stressed the development of intellect over mystical spirituality. Its ethical principles are in keeping with the spirit of traditional Talmudic Judaism. However, it holds that humanity's efforts toward moral perfection also influence the spiritual world of the divine emanations or Sefirot. The practice of virtue, moreover, increases the outpouring of divine grace.

Both masculinity and femininity play a crucial role in the Zohar's vision of the Godhead. Thus:

The Zohar also relates various apparently medieval legends, including ideas about Satan, demonic powers, and sorcery, as well as formulas one may use to protect oneself from such evil influences.

Through the Zohar, Moses de Leon left a powerful legacy on both Jewish and Christian tradition. The Zohar was praised by numerous rabbis for its opposition to religious formalism. It stimulated the imagination and emotions, reinvigorating the spirituality of many Jews who felt suffocated by Talmudic scholasticism and legalism. Other rabbis, however, were disturbed by the Zohar's propagation and by what they considered to be superstition and magic. Its appeal to the goal of mystical ecstasy, they claimed, produced generations of dreamers, whose spiritual imaginations looked at the world as being populated by spirits, demons, and various other spiritual influences, rather than dealing with the practical needs of the here and now.

The Zohar influenced later kabbalists such as Isaac Luria and others, whose works stimulated a wave of interest in Jewish mysticism throughout Europe and the Ottoman Empire. Elements of the Zohar entered the Jewish liturgy of the sixteenth and seventeenth centuries. Ideas and expressions from the Zohar may also be found in the language of many Jewish poets of the era.

Kabbalistic fervor, much of it based on the Zohar, reached its zenith in the widespread but ultimately failed messianic movement of Sabbatai Zevi in the mid-seventeenth century, resulting in a backlash of conservative rabbinism against mysticism in general. Interest in the Kabbalah and the Zohar was revived through the work of the Baal Shem Tov and the movement of Hasidic Judaism. Today, the Zohar is once again a widely read work, although it is still looked on with suspicion by many non-Hasidic rabbis.

The enthusiasm felt for the Zohar was shared by Christian scholars such as Giovanni Pico della Mirandola, Johann Reuchlin, Aegidius of Viterbo, and others, all of whom believed that the book contained proofs of the truth of Christianity. This belief was based, in part, by such expression in the Zohar as, "The Ancient of Days has three heads. He reveals himself in three archetypes, all three forming but one." The Zohar treatment of the process of creation was also thought by some Christians to bring Judaism closer to the idea of the Human Fall.

Moses de Leon thus became one of history's most influential Jewish writers, ironically much more so through the one work which he published not in his own name, but under the pseudonym of Shimon Bar Yochai.