Mantodea is an order (or suborder) of large, terrestrial, carnivorous insects characterized by raptorial forelegs (adapted to capturing prey). The closest relatives of mantids are the orders Blattodea (cockroaches) and Isoptera (termites). In some classifications, the cockroaches, termites, and mantids are grouped together in the single order Dictyoptera, with Mantodea, Blattodea, and Isoptera considered suborders.

Praying mantid or mantid is a common name for any member of Mantodea (although sometimes the term is limited to the family Mantidae). Another common name is praying mantis, although this latter name technically refers to those that belong to the genus Mantis (Watkins and Bessin 2003). Often mistakenly spelled "preying" mantids, they are in fact named for the typical "prayer-like" stance.

Praying mantids, with their protective coloration and unique forms and behaviors, including prayer-like posture and grooming behavior, add to the wonder of nature for humans. Masters of camouflage, they make use of protective coloration to blend in with the foliage and even mimic aspects like leaves, sticks, and blades of grass. Beyond adding to humans' fascination with nature, mantids help in controlling insect pests. Ecologically, they are integral to terrestrial food chains as the top arthropods, eating insects such as flies and aphids, and even larger organisms, such as small reptiles, amphibians, birds, and mammals.

There are approximately 2,300 species of mantids, variously divided into from eight (Beier 1968; Preston-Mafham 1990) to 15 families (Ehrmann 2002). The largest family is Mantidae.

Members of Mantodea are notable for their generally large size for insects, ranging from one centimeter (0.4 inches) to more than 17 centimeters (6.7 inches) (Grzimek et al. 2004). Females are generally larger than males and may be twice the size of males (Grzimek et al. 2004). Key characteristics are raptorial forelegs, ultrasound "ear" on metathorax, leathery forewings, asymmetrical male genitalia, and eggs in foamy ootheca (TOL 2003).

Like all insects, mantids have a three-segmented body, with a head, thorax and abdomen. The ten-segmented abdomen is elongated and typically covered by two pairs of wings in adults, but some species have no wings. Their heads, which is triangular in most species, can turn 180 degrees as a result of flexible neck muscles (Grzimek et al. 2004). They have two, large compound eyes as well as three smaller, simple eyes. Most have long and narrow antennae with many segments, although some have feathery antennae (Grzimek et al. 2004).

Mantids are among the hemimetabolic insects—those whose immature stages are similar to the adults. The immature mantids primarily differ in the lack of wings and functional reproductive organs.

Most species of Mantodea are tropical, with less diversity in temperate regions, and no mantids in boreal or tundra climates (Grzimek et al. 2004).

Mantids are notable for their nimble reflexes. Their diet usually consists of living insects, including flies and aphids; larger species have been known to prey on small lizards, frogs, birds, snakes, and even rodents. They are considered top arthropods in their terrestrial food chain (Grzimek et al. 2004). Most mantids are ambush predators, waiting for prey to stray too near to them. The mantid then lashes out at remarkable speed. Some ground and bark species, however, pursue their prey rather quickly. A mantid's prey is caught and held securely with its grasping, spiked forelegs.

Mantids are masters of camouflage and make use of protective coloration to blend in with the foliage, both to avoid predators themselves, and to better snare their victims. Some species in Africa and Australia are able to turn black after a molt following a fire in the region to blend in with the fire ravaged landscape (fire melanism). In addition to this adaptation, they have adapted to not only blend with the foliage, but to mimic it, appearing as leaves, sticks, blades of grass, flowers, or even stones. Their diet and coloration frequently change as the mantid grows.

Mantids have a number of interesting behaviors. They are known to groom themselves frequently, using their forelegs to wipe their eyes and heads and cleaning the forelegs with their mouths, and doing the same with their antennae, middle legs, and hind legs (Grzimek et al. 2004). Defense mechanisms against predators include running or flying away, playing dead, pinching or biting, or using a startle display that includes thrusting out the forelegs, flashing the wings, and opening the mouth, with many species being aided in this later behavior by having brightly colored undersides of the forelegs and wings (Grzimek et al. 2004).

The praying mantis goes through three stages of metamorphosis: egg, nymph, and adult. Scientists also refer to this as an incomplete metamorphosis because the nymph and adult insect look essentially alike, except that the nymph is smaller and has no wings. A mantis nymph increases in size by replacing its outer body covering with a sturdy, flexible exoskeleton and molting when needed. This can happen up to five to ten times, depending on the species. After the final molt it should have full grown wings. Some species are wingless or brachypterous, particularly in the female sex.

One of the most popular myths about praying mantids is that the female always decapitates males during copulation; while this sometimes happens, it is not commonplace in nature (Grzimek et al. 2004). It is frequently observed in captivity. If the female does cannibalize the male during copulation, he will continue to mate even without the head (Grzimek et al. 2004). The female may start feeding by biting off the male’s head (as with any prey), and if mating had begun, the male’s movements may become even more vigorous in its delivery of sperm.

Early researchers thought that because copulatory movement is controlled by ganglion in the abdomen not the head, removal of the male’s head was a reproductive strategy by females to enhance fertilization while obtaining sustenance. Later, this bizarre behavior appeared to be an artifact of intrusive laboratory observation. Whether the behavior in the field is natural, or also the result of distractions caused by the human observer, remains controversial. Mantids are highly visual creatures, and notice any disturbance occurring in the laboratory or field such as bright lights or moving scientists.

Research by Liske and Davis (1987) and others found (e.g. using video recorders in vacant rooms) that Chinese mantids that had been fed ad libitum (so were not starving) actually displayed elaborate courtship behavior when left undisturbed. The male engages the female in courtship dance, to change her interest from feeding to mating. Courtship display was also observed in some other species, but it does not hold for all mantids. Aldous Huxley made philosophical observations about the nature of death while two mantids mated in the sight of two characters in the novel Island. The species was Gongylus gongylodes. 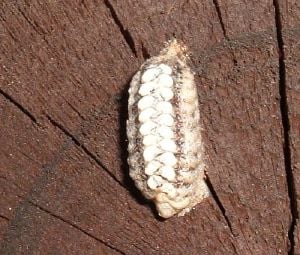 The mating season in temperate countries typically begins in autumn. To mate following courtship, the male usually leaps onto the female’s back, and clasps her thorax and wing bases with his forelegs. He then arches his abdomen to deposit and store sperm in a special chamber at the tip of the female’s abdomen.

Depending on the species, the female then lays between ten to 400 eggs. These are deposited in a frothy mass that is produced by glands in the abdomen. This froth then hardens, creating a protective capsule with a further protective coat, and the egg mass is called an ootheca. Depending on the species these can be attached to a flat surface, wrapped around a plant or even deposited in the ground. In spite of the versatility and durability of the eggs, they are often preyed on, especially by several species of wasps. Variability in the species also determines whether or not the mother guards the egg pod or leaves it.

On a human hand 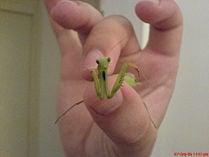 Many gardeners consider mantids to be desirable insects, as they prey upon many harmful insect species. Organic gardeners who avoid pesticides may encourage mantids as a form of biological pest control. Mantis egg cases are sold in some garden stores for this purpose. In particular, the Chinese mantid, T. a. sinensis is used extensively for biological control of plant pests (Grzimek et al. 2004).

It should be noted, however, that mantids prey on neutral and beneficial insects as well, basically eating anything they can successfully capture and devour, including other mantids.

Mantids have been noted in art and literature for more than a thousand years. One of the earliest mantid references is in the ancient Chinese dictionary Erya, which gives its attributes in poetry (representing courage and fearlessness), as well as a brief description. A later text, the Jingshi Zhenglei Daguan Bencao 經史證類大觀本草 ("Bencao of the Daguan period, Annotated and Arranged by Types, Based upon the Classics and Historical Works") from 1108, is impressively correct on the construction of the egg packages, the development cycle, the anatomy and even the function of the antennae. Mantids have been used by Chinese in fighting games, their prayerful form was considered a help to travelers to find their way home, and even the martial arts kung fu includes a style mimicking the movements of mantids (Grzimek et al. 2004).

By the 18th century the biology and morphology of the mantids became relatively accurate. Roesel von Rosenhof accurately illustrated and described them in the Insekten-Belustigungen (Insect Entertainments).

Only one Spanish species, Apteromantis aptera, is listed as Lower Risk/Near Threatened.

Mantodea has about 435 genera and 2,300 species (Grzimek et al. 2004), although the number of genera has varied according to the taxonomic scheme.