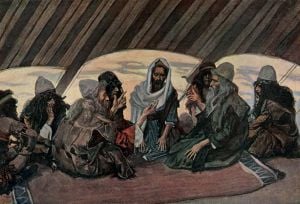 Jethro and Moses, as in Exodus 18, watercolor by James Tissot

In the Hebrew Bible, Jethro (Hebrew: יִתְרוֹ, Yitro; "His Excellence/Posterity") was the priest of Midian and Moses' father-in-law, who sheltered Moses for 40 years after his flight from Egypt. The father of Moses' wife Zipporah, Jethro became the grandfather of their two sons, Gershom and Eliezer.

It was while tending Jethro's flocks that Moses famously encountered God in the burning bush and received his calling to deliver Israel from Egyptian oppression. Jethro later visited Moses in the wilderness during the Exodus. There, he offered sacrifice to the Hebrew God Yahweh and hosted a sacrificial feast with Aaron and the elders of Israel. Moses then accepted Jethro's advice concerning the need to teach the people God's laws and organize a system of justice.

Identified in the Book of Judges as a Kenite, Moses' father-in-law is also called "Reuel" and "Hobab." In Islam, Jethro is known as Shoaib, one of the prophets in the Qur'an. He is also revered as a major prophet in the Druze religion.

Jethro is much discussed in rabbinical tradition, where he is sometimes seen as a repentant idolater but also honored as one of several authentic Gentile prophets. Modern scholars speculate that Moses may have inherited from Jethro not only sound advice about legal administration, but also important spiritual traditions. 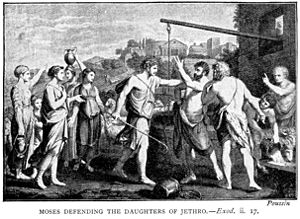 Moses defends the daughters of Jethro from a group of Midianite men.

The Book of Exodus relates that Moses came to Midian after fleeing from Pharaoh at the age of 40. There, he rested from his journey at a local well. Jethro's seven daughters arrived to water their flocks there, but Midianite male shepherds soon appeared on the scene and began to drive off the women. Moses defended the shepherdesses and assisted them in the work of drawing water. The maidens then returned to the father, identified here as Reuel, and reported Moses' kindness. Jethro scolded the girls for not offering proper hospitality to their deliverer and commanded them to invite him to share a meal with the family.

Apparently lacking a son to assist him, Jethro/Reuel invited Moses to stay with him indefinitely and soon offered him his daughter Zipporah in marriage. Moses accepted, and Jethro thus became the grandfather of Gershom. Moses lived with Jethro and his daughters throughout his 40-year course in exile. It was while grazing Jethro's flocks that Moses beheld the burning bush and climbed the holy mountain of Horeb, where he received his calling from God (Exodus 3:1). He then asked permission from Jethro to return to Egypt, ostensibly with the purpose of visiting his remaining family there.

After Moses and the Israelites had crossed the Red Sea, Jethro heard the news of the miraculous escape. Moses soon sent Zipporah back to her father, now with a second son, Eliezer, although the boy's age is not specified. Jethro, Zipporah, and the two boys then came to visit Moses in the wilderness (Ex. 18). Moses greeted Jethro with honor, bowing to the ground before him and kissing him. Moses then told Jethro of all the miracles done for the Israelites by Yahweh. Jethro, rejoicing, exclaimed, "Now I know that the Lord is greater than all gods," and offered burnt offerings and sacrifices to God. Jethro then hosted a sacred feast, and "Aaron came with all the elders of Israel to eat bread with Moses' father-in-law in the presence of God" (Ex 18:9).

Jethro also advised Moses to teach the people God's laws and appoint deputies to assist in dealing with legal and administrative issues. "You must be the people's representative before God and bring their disputes to him," Jethro counseled. "Teach them the decrees and laws, and show them the way to live and the duties they are to perform. But select capable men from all the people—men who fear God, trustworthy men who hate dishonest gain—and appoint them as officials over thousands, hundreds, fifties and tens" (Ex 18:19-21).

Jethro is presented here as speaking on God's behalf, declaring: "If you do this, and God so commands, you will be able to stand the strain, and all these people will go home satisfied." The text relates that "Moses listened to his father-in-law and did everything he said." After this Jethro returned to his own country.

Some commentators have suggested that Jethro's role was even greater than merely advising Moses on the administration of justice. Given the fact that Moses revealed the Law to the Israelites shortly after Jethro's departure, they speculate that Jethro may actually have been the source of at least part of the Jewish legal tradition. 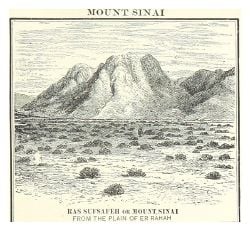 Jethro's role and identity has been much discussed by biblical scholars. His different names are usually explained with reference to the documentary hypothesis, in which the various literary sources use different names for both God and the human characters involved. In addition, the name "Jethro" is thought by some to constitute a title, similar to "Excellency," rather than a name. In this view, Reuel would be a given name, and Jethro a title. A third name, Hobab, meanwhile, is sometimes identified as Moses' father-in-law but at other times as his brother-in-law.

Of particular interest to biblical scholars is Jethro's role as a "priest of Midian" and his identification in Judges 4:11 as Kenite. The Kenites were a Canaanite or Midianite tribe that later affiliated at least in part with the Israelites. Traditionally, this affiliation began with Jethro and his descendants.

As a priest of the Kenites living in Midian, the question arises as to which deity or deities Jethro worshiped. The chief god El was known both to Canaanites and the Israelites, and the name Reuel, like many Semitic names of the era, contains the theophoric syllable el. The worship of El by Jethro would thus be unsurprising. But did Jethro already worship the Hebrew God Yahweh before meeting Moses? Biblical scholars point to the fact that Moses himself learned of God's true name (Yahweh) only after his stay in Midian with Jethro. In the story of the burning bush, God declares:

I appeared to Abraham, to Isaac, and to Jacob as God Almighty (El Shaddai), but by my name the Lord (Yahweh) I did not make myself known to them (Exodus 6:3).

Some suggest that Moses had first learned of Yahweh from his father-in-law and that the above-mentioned sacramental meal which Jethro shared with Aaron and the elders of Israel describes an initiation of Aaron into Yahweh's formal worship.

The Bible also describes Jethro assisting Moses in the organization of an administrative court system. In the same passage, Jethro commands Moses to teach the people God's laws; and this occurs before Moses has received Ten Commandments.

In Islamic and Druze tradition

In Islam, Moses' father-in-law is officially recognized as the prophet Shuˤayb (Shoaib). He is believed to be Abraham's great-grandson through Esau (Genesis 36:4) and was sent as a prophet to the Midianites to warn them to end their evil ways. The Prophet Shoaib “Jethro” Mosque and Tomb is located near the Jordanian city of Mahis.

The Druze also revere Jethro as a great teacher, indeed as their foremost prophet. Some Druze claim that they are the literal descendants of Jethro. Their largest annual celebration is held at their version tomb of Jethro, near Tiberias in northern Israel, which is their most important religious shrine.

The different names of Jethro puzzled the rabbis of the Talmud. Some thought that his real name was Hobab, and that Reuel was his father. Others affirm that his actual name was "Reuel," interpreting it as "the friend of God." According to Rabbi Shimon bar Yochai, he had two names, "Hobab" and "Jethro" (Sifre, Num. 78). However, rabbinical opinion generally accepted that he had as many as seven names: "Reuel," "Jether," "Jethro," "Hobab," "Heber," "Keni," and "Putiel."

According to one rabbinical tradition, Jethro together with Balaam and Job was one of three Gentile prophets consulted by Pharaoh as to how best to eliminate the Israelites. He dissuaded the Egyptian king from his design and was rewarded by God in that his descendants, the Rechabites, sat with the Sanhedrin in the Temple of Jerusalem (Sanh. 106a; Ex. R. i. 12; comp. 1 Chron. 2:55). Another opinion holds that, before the Exodus, Jethro and Amalek were consulted by Pharaoh about how best to kill the Israelites, and that both of them advised him to throw the male children into theNile. However, seeing that Amalek was excluded from both this and the future life, Jethro later repented (Ex. R. xxvii: 5).

Rabbi Joshua ben Hananiah and Rabbi Eleazar ha-Moda'i disagree as to Jethro's position in Midian. According to one, the words "kohen Midyan" mean that he was indeed the "priest of Midian"; but according to the other, he was "prince of Midian" (Mek. l.c.; Ex. R. xxvii. 2). The opinion that Jethro was a priest, however, is generally accepted (Ex. R. i. 35; Tan., Yitro, 5). It is further said (Ex. R. l.c.) that Jethro realized that worshiping an idol was foolish, and abandoned this practice. The Midianites therefore excommunicated him, and none would keep his flocks. It was for this reason that his daughters were compelled to tend them and were ill-treated by the other shepherds.

Whether Jethro went to the wilderness to meet Moses before or after the Torah was given, and consequently what it was that induced him to go to the wilderness, are also disputed points among the rabbis (Zeb. 116a; Yer. Meg. i. 11; Mek. l.c.). According to some, it was the giving of the Torah that inspired his journey, while according to others, it was either the crossing of the Red Sea dry-shod, or the miraculous falling of the manna. According to Rabbi Joshua, Moses purposely sent Jethro away in order that he should not be present at the revelation of the Law.

Moses did not go out alone to meet his father-in-law, but was accompanied by Aaron and the 70 elders of Israel, in order to honor Jethro. Some say that even the Shekhinah itself went out to meet him (Mek. l.c.; Tan., Yitro, 6). The words "wa-yiḥad Yitro" (Ex. 18:9), generally translated "and Jethro rejoiced," are interpreted by some of the Talmudists as "he circumcised himself." By an interchange of the letters ח with the ה, the phrase would read "wa-yihad," meaning "he became a Jew" (Tan., Yitro, 5). Others interpret it as "he felt a stinging in his flesh"; that is to say, he was sorry for the loss of the Egyptians, his former coreligionists.

Jethro knew that Yahweh was greater than all the gods (Ex. 18:11), because he had previously worshiped all the idols of the world (Mek. l.c.; Tan. l.c.). Jethro was reportedly the first to utter a benediction to God for the wonders performed by Him for the Israelites (Ex. 18:10). Such a thing had not yet been done either by Moses or by any of the Israelites (Sanh. l.c.; Mek. l.c. 2).