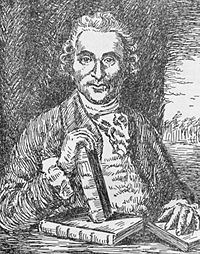 James Lind (1716 in Edinburgh – 1794 in Gosport) was a Scottish doctor and a pioneer of naval hygiene in the Royal Navy, and is particularly renowned as an authority on the treatment of scurvy, establishing the important role of citrus fruits for prevention and treatment of this deficiency disease. Lind shed light on the poor living conditions and diet of seamen and argued for the health benefits of better ventilation aboard naval ships, including improved clothing and cleanliness of sailors and below-deck fumigation with sulphur and arsenic. He also proposed that freshwater could be obtained by distilling sea water.

Through his work, Lind influenced practices of preventive medicine and good nutrition among British soldiers and helped to advance better health practices. While the well-being of crews on naval ships would appear to be a major practical, if not ethical concern for government leaders, poor living conditions and even scurvy were often tolerated. Lind, however, took upon himself the task of addressing such concerns, paving the way for better health and living conditions.

Lind was born in Edinburgh in 1716 as the son of a merchant. He attended grammar school in Edinburgh, and became versed in Latin and Greek at that time.

In 1731, Lind began his medical studies as an apprentice of George Langlands (Dunn 1997), a fellow of the Incorporation of Surgeons, which preceded the Royal College of Surgeons of Edinburgh. In 1739, he entered the Navy as a surgeon's mate, serving in the Mediterranean, off the coast of West Africa, and in the West Indies, as well as in the English Channel (BBC; JLL).

By 1747, he had become Surgeon of HMS Salisbury in the Channel Fleet. It was as this position Lind was to perform his controlled trial for the treatment of scurvy (see below). A year later, he retired from the Navy, wrote his MD thesis on venereal diseases, and was granted a license to practice in Edinburgh, Scotland (BBC). In 1750, he was elected Fellow of the Royal College of Physicians of Edinburgh.

In 1753, Lind published A treatise of scurvy. In 1758, he was appointed chief physician of the Royal Naval Hospital Haslar at Portsmouth.

From 1758-1783, James Lind worked as a senior physician of the Royal Naval Hospital Haslar (a position that would be succeeded by his son John in 1783). In 1761, Lind discovered that the steam of salt water was freshwater, and in 1762 proposed a method of providing ships with freshwater by distillation of salt water. In 1762, he also published An essay on the most effectual means of preserving the health of seamen. In 1763, he published Two papers on fevers and infection and in 1771 published An essay on diseases incidental to Europeans in hot climates (JLL).

In 1794, he died at Gosport and was buried in Portchester Church, Portsmouth. He is commemorated by a plaque in the Medical School of the University of Edinburgh.

A cure for scurvy

Lind is particularly well-known for advancing a preventative measure and treatment for scurvy, a deficiency disease prevalent at the time.

Scurvy is a disease now known to be caused by a deficiency of vitamin C, but in Lind's day, the concept of vitamins was unknown. Vitamin C (ascorbic acid) is necessary for the maintenance of healthy and connective tissue. Its deficiency causes tiredness, muscle weakness, bleeding gums and loose teeth, joint and muscle aches, rash on the legs, excessive bleeding, and can lead to ulcers in the lower legs and feet, loss of hair, opening of old wounds, depression, and eventually death (Edgren 2002; BBC).

In 1740, the catastrophic result of Anson's circumnavigation attracted much attention in Europe; out of 1900 men, 1400 had died, most of them allegedly from having contracted scurvy. According to Lind, scurvy caused more deaths in the British fleets than French and Spanish arms. Scurvy was common among those with poor access to fresh fruit and vegetables, such as remote, isolated sailors and soldiers.

The need to include fresh plant food or raw animal flesh in the diet to prevent disease was known from ancient times. Native peoples living in marginal areas incorporated this into their medicinal lore. In 1536, the French explorer Jacques Cartier, exploring the St. Lawrence River, used the local natives' knowledge to save his men who were dying of scurvy. He boiled the needles of the arbor vitae tree to make a tea that was later shown to contain 50 milligrams of vitamin C per 100 grams (Martini 2002; Simpson).

Since the 1600s, it had been known that citrus fruit had an antiscorbutic effect, when John Woodall, the first appointed surgeon to the British East India Company, recommended the preventive and curative use of lemon juice in his book The Surgeon's Mate in 1627. Likewise, in 1734, Dutch writer, Johann Bachstrom published a book on scurvy in which he stated that "scurvy is solely owing to a total abstinence from fresh vegetable food, and greens; which is alone the primary cause of the disease," and urged the use of fresh fruit and vegetables as a cure. And throughout history, the benefit of plant food to survive long sea voyages has been occasionally recommended by authorities. Nonetheless, the preventive use of citrus fruit and other vegetable fruit was not widespread in Lind's time.

While Lind was not the first to suggest citrus fruit as a cure for scurvy, in 1747 he became the the first to study their effect by a systematic experiment. Lind thought that scurvy was due to putrefaction of the body, which could be prevented by acids; that is why he chose to experiment with dietary supplements of acidic quality. In his experiment, he divided 12 scorbutic sailors (suffering from scurvy) into six groups. They all received the same diet, and in addition group one was given a quart of cider daily, group two 25 drops of elixir of vitriol (sulfuric acid), group three six spoonful of vinegar, group four half a pint of seawater, group five received two oranges and one lemon and the last group a spicy paste plus a drink of barley water. The treatment of group five stopped after six days when they ran out of fruit, but by that time one sailor was fit for duty and the other had almost recovered. Apart from that, only group one also showed some effect of its treatment.

Lind's trials ranks as one if not the first clinical experiments in the history of medicine (Simon 2002), comparing populations where one factor is varied and all other factors are kept the same. The results conclusively showed that citrus fruits prevented the disease.

Shortly after this experiment Lind retired from the Navy and at first practiced privately as a physician. In 1753, he published A treatise of the scurvy. However, this book was slow to be noticed, partly because he gave conflicting evidence within the book, and partly because the British admiralty saw care for the well-being of crews as a sign of weakness. In addition, fresh fruit was very expensive to keep on board, whereas boiling it down to juice allowed easy storage but destroyed the vitamin (especially if boiled in copper kettles (Oxford 2005). Ship captains assumed wrongly that Lind's suggestions did not work because those juices failed to cure scurvy.

In 1762, Lind’s Essay on the most effectual means of preserving the health of seamen appeared. In it, he recommended growing salad, i.e. watercress (662 mg vitamin C per 100 grams) on wet blankets. This was actually put in practice, and in the winter of 1775 the British Army in North America was supplied with mustard and cress seeds. Lind also continued to advocate citrus fruit. But because he—and most other physicians—still believed that their curative effect was due to the acid, it was judged reasonable to substitute them with cheaper acids.

It was Gilbert Blane who implemented citrus fruit. In an experiment in 1794, lemon juice was issued on board the Suffolk on a 23-week, non-stop voyage to India. The daily ration of two-thirds of an ounce mixed in grog contained just about the minimum daily intake of 10 milligrams vitamin C. There was no serious outbreak of scurvy. The following year the Admiralty took up the general issue of lemon juice to the whole fleet. This was not the end of scurvy in the Navy, as lemon juice was considered as a cure for scurvy and consequentially was dispensed by the ship's surgeon. Only after 1800 were the preventive qualities increasingly recognized (Macdonald 2006).

Fresh water from the sea

In the eighteenth century, sailors took along water and beer in casks and used rain water when available. According to the Regulations and Instructions relating to His Majesty's Service at Sea, which had been published for the first time in 1733 by the Admiralty, sailors were entitled to a gallon of weak beer daily (5/6 of the usual British gallon, equivalent to the modern American gallon or slightly more than three and a half liters). As the beer had been boiled in the brewing process, it was reasonably free from bacteria and lasted for months unlike water kept in a cask for the same time. In the Mediterranean, wine was also issued, often fortified with brandy.

For example, a frigate with 240 men, equipped with stores for four months, carried more than hundred tons of drinking water. Water quality depended on the original source of the water, the condition of the casks and for how long it had been kept. During normal times, sailors were allowed to take as much water from a guarded butt as they wanted, but were not allowed to take any water away. When water got scarce, it was rationed and rain water was collected with spread sails. Fresh water was also collected when an opportunity presented itself en voyage, but watering places were often marshy, and in the tropics infested by malaria.

In 1758, Lind discovered that the steam of heated salt water was fresh and tasted like rain water. He also proposed to use solar energy for the distillation of water. But only when a new type of cooking stove was introduced in 1810 did the possibility arise of producing fresh water by distillation on a useful scale.

Retrieved from https://www.newworldencyclopedia.org/p/index.php?title=James_Lind&oldid=907280
Categories:
Hidden category:
This page was last edited on 20 January 2009, at 05:41.
Content is available under Creative Commons Attribution/Share-Alike License; additional terms may apply. See Terms of Use for details.