Ichneumonidae is a diverse family of wasps, typically characterized by a parasitic component to the life cycle, antennae with 16 or more segments, an elongated abdomen, and females with long ovipositors that frequently are longer than their body. This family is within the Aporcrita suborder of the Hymenoptera order, a taxon that also includes ants, bees, and sawflies. Members of Ichneumonidae commonly are called ichneumon wasps. Less exact terms are ichneumon flies (they are not closely related to true flies), or scorpion wasps due to the extreme lengthening and curving of the abdomen (scorpions are not insects). Simply but ambiguously, these insects are commonly called "ichneumons," which is also a term for the Egyptian mongoose (Herpestes ichneumon); ichneumonids is often encountered as a less ambiguous alternative.

Ichneumonidae has a cosmopolitan distribution, with over 60,000 species worldwide. There are approximately 3,000 species of ichneumonids in North America. The distribution of Ichneumonidae is one of the most notable exceptions to the common latitudinal gradient in species diversity because it shows greater speciation at high latitudes than at low latitudes (Sime and Brower 1998).

Ichneumon wasps are important parasitoids of other insects. Common hosts are larvae and pupae of Coleoptera, Hymenoptera, and Lepidoptera.

For Charles Darwin, the life cycle of parasitic Ichneumonidae presented a religious conundrum: How could a just and benevolent God create a living being that deposited its eggs inside a caterpillar, such that the emerging wasp larvae would eat first the digestive organs, keeping the twitching caterpillar alive until the larva got to the more immediately vital organs? The mechanism of natural selection as the directive or creative force—a materialistic, purposeless, and non-progressive agent—resolves such a philosophical issue. However, one may also note that the parasitic wasp, as with other taxa, are part of an extraordinary harmony in nature, which appears to be underlain by the principle of bi-level functionality. This principle notes that taxonomic groups not only advance their own individual functions (survival, reproduction, development), but also provide a larger function (for the ecosystem, humans). In the case of the caterpillar being consumed by wasp larva, it provides food for the parasitic wasp. In the case of the parasitic wasps, they play an essential role in the function of ecosystems as part of food chains, as predator and prey, and in the control of insects. For humans, Ichneumonidae offer a natural biocontrol of pest insects, such as those that eat agricultural crops. 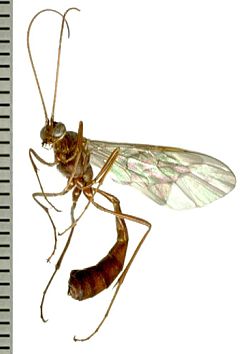 As members of the Hymenoptera suborder Apocrita, along with bees, ants, and other wasps, ichneumonids are characterized by a constriction between the first and second abdominal segments called a wasp-waist. This also involves the fusion of the first abdominal segment to the thorax. Ichneumonids are holometabolus insects, meaning they undergo complete metamorphosis in which the larvae differ markedly from the adults. The larva of ichneumonids, like all Apocrita, do not have legs, prolegs, or ocelli. As in other Hymenoptera, sexes are significantly genetically different. Females have a diploid (2n) number of chromosomes and come about from fertilized eggs. Males, in contrast, have a haploid (n) number of chromosomes and develop from an unfertilized egg.

Ichneumonids belong to the Apocrita division Parasitica, which includes the superfamilies Ichneumonoidea, Chalcidoidea, Cynipoidea, and Proctotrupoidea (Grzimek et al. 2004). Members of the Parasitica tend to be parasites on other insects, while membes of the other division of Apocrita, Aculeata, which contains ants, bees, and others wasps, tend to be stinging forms. In Aculeata, the ovipositor (an organ typically used for laying eggs) is adapted into a venomous stinger. (Some Parasitca are phytophagous and many Aculeata are parasites (Grzimek et al. 2004).

Ichneumon wasps differ from the wasps that sting in defense (Aculeata: Vespoidea and Apoidea) in that the antennae have more segments; typically 16 or more, whereas the others have 13 or fewer. Their abdomen is characteristically very elongated, unlike in their relatives the braconids. This lengthened section may also be segmented. Female ichneumon wasps frequently exhibit an ovipositor longer than their body. Ovipositors and stingers are homologous structures; some Ichneumons inject venom along with the egg, but they do not use the ovipositor as a stinger, per se, except in the subfamily Ophioninae. Stingers in aculeate Hymenoptera—which like Ichneumonidae belong to the Apocrita—are used exclusively for defense; they cannot be used as egg-laying equipment. Males do not possess stingers or ovipositors in either lineage. 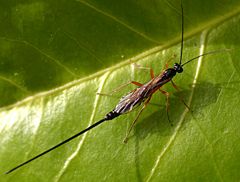 In some of the largest species, namely from the genera Megarhyssa and Rhyssa, both sexes will wander over the surface of logs, and tree trunks, tapping with their antennae. Each sex does so for a different reason; females are "listening" for wood boring larvae of the horntail wasps (hymenopteran family Siricidae) upon which to lay eggs, males are listening for emerging females with which to mate. Upon sensing the vibrations emitted by a wood-boring host, the female wasp will drill her ovipositor into the substrate until it reaches the cavity wherein lies the host. She then injects an egg through the hollow tube into the body cavity. There the egg will hatch and the resulting larva will devour its host before emergence. How a female is able to drill with her ovipositor into solid wood is still somewhat of a mystery to science, though it has been found that there is metal (ionized manganese or zinc) in the extreme tip of some species' ovipositors.

The process of oviposition in Dolichomitus imperator 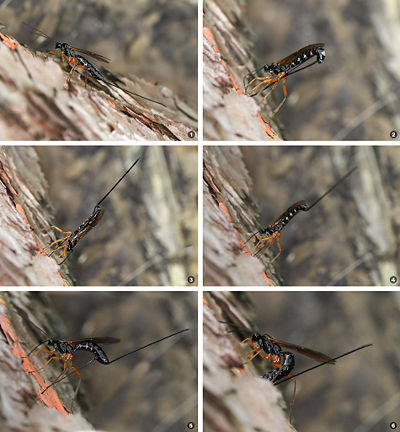 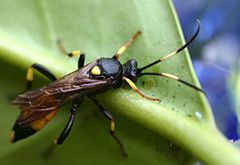 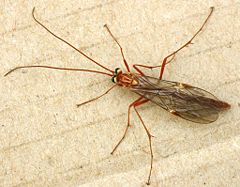 The taxonomy of the Ichneumonidae remains unsettled. About as diverse as the true weevils (Curculionidae), there are numerous small, inconspicuous, and hard-to-identify ichneumon wasps. The sheer diversity means that DNA sequence data is only available for a tiny fraction of the species, and that detailed cladistic studies require major-scale computing capacity.

Consequently, the phylogeny and systematics of the ichneumon wasps are not definitely resolved. Several prominent authors—like Townes (1969abc, 1971) and J. Oehlke (1966, 1967)—have gone as far as to publish major reviews that defy the International Code of Zoological Nomenclature.

The list presented here follows the suggestion of David Wahl of the American Entomological Institute (Wahl 1999). It will be updated as necessary, as new research resolves the interrelationships of the ichneumonm wasps better.

The subfamilies are not listed in a taxonomic or phylogenetic sequence, as the relationships between the groups are not yet resolved to a degree to render any such arrangement even marginally reliable (Wahl 1999):