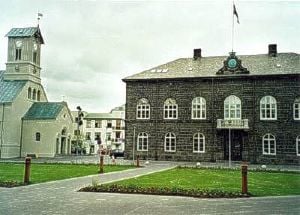 The Icelandic Parliament, Reykjavík building built. The founding of the Althing (Parliament) marked the beginning of the Commonwealth.

The Icelandic Commonwealth or the Icelandic Free State (Icelandic: Þjóðveldið) was the state existing in Iceland between the establishment of the Althing (parliament) in 930 and the pledge of fealty to the Norwegian king in 1262. It was initially established by a public consisting largely of recent immigrants from Norway who had fled the unification of that country under King Harald Fairhair. As a political system, the commonwealth allowed citizens to choose their own "chief." The system as a whole, which had no coercive power or law-enforcement agency, rested on a social contract. Since chiefdoms could be inherited, sold or given away, private enterprise lay at the root of the social structure. The way in which any free-man could participate governance has been compared with the Athenian system. The Commonwealth has also been described as a "unique" system for its time, and as quasi-democratic.[1] The period is remembered as "Golden Age" in Iceland.[2]

As part of the "national myth," this later ensured that Iceland understood its own legacy as one that guarantees "political equality for all Icelanders."[2] The commonwealth collapsed when external influence disrupted the social balance, leading to the emergence of fewer and wealthier chiefs. The legacy of the commonwealth suggests that humans are capable of creating stable, just and equitable societies. The narrative also suggests that the absence of war allows such a society to flourish. It might also suggest that smaller units with minimal government function best. The future of geo-political organization may not be the nation-state but smaller units linked globally through regional associations or within confederations, similar to the idea developed by, among others, Benjamin R. Barber.[3] An old form of government may have lessons for contemporary political life.

The medieval Icelandic state had an unusual structure. At the national level, the Althing was both court and legislature; there was no king or other central executive power. Iceland was divided into numerous goðorð[4] (plural same as singular), which were essentially clans or alliances run by chieftains called goðar (singular goði). Each chief built and was responsible for running a pagan shrine. The chieftains provided for defense and appointed judges to resolve disputes between goðorð members. However, all free men could attend. It gathered at the Law Rock. The system made it difficult if not impossible for any individual to accrue too much power, since people could switch their loyalties and there was no "property" for him to dispense. With no king or chief executive, the commonwealth was a unique political system at this time. The chiefs were required to explain their vote on any issue to their supporters. There was, as Adam of Bremen put it in 1075, "no king, only law."[5] A law-speaker was elected every three years by one of the quarters (chosen by lot). He memorized the law, offered legal advice and presided at the Athling.

If a person wanted to appeal a decision made by his goðorð court or if a dispute arose between members of different goðorð, the case would be referred to a system of higher-level courts, leading up to the four regional courts which made up the Althing. The Althing eventually created a national "fifth court," as the highest court of all, and more goðar to be its members. There were no police to enforce the laws, which rested instead on the citizens’ free participation in a social contract. Cases were initially tried by a jury of peers, half of whom were chosen by the defendant, half by the plaintiff.

At the Christian Conversion of Iceland in 1000, the Althing decreed that all Icelanders must be baptized, and forbade the public celebration of pagan rituals. Private celebration was forbidden a few years later. The introduction of Christianity also led to the first tax, the tithe, which citizens had to pay to maintain the Church and its clergy.

In 1117 the laws were put into writing, and this written code was later referred to as the Gray Goose Laws. Fines imposed for crime went as restitution to the victim or to their family, not to the "state." All law was civil, because the court system made no distinction between criminal or civil cases. Murder was punished with a fine, or exile.

Life within the system 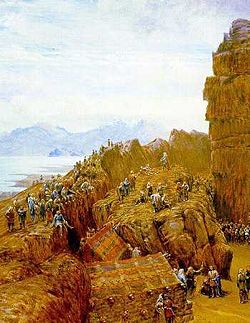 Nineteenth-century interpretation of the Althing in the Icelandic Commonwealth.

The actual operation of this system is a common subject matter in some of the Icelandic sagas. Works like Njáll’s Saga and the Laxdaela Saga give many details, but their accuracy has been disputed. These and other sagas are available in modern English translations.[6] The tale of Grettir the Strong is an excellent adventure story based on true events, but tells us little about the workings of the society.[7]

Njáll’s Saga includes the Christianization of Iceland within the framework of the story. Most Icelanders at this time were farmers, who appear to have wanted to cultivate their land and tend their live stock in peace. "The Icelandic Commonwealth," says Asgeirsson "proved to be a stable and relatively equitable society for over two centuries, showing a remarkable respect for the rule of law and a desire for peace."[2] A pioneer form of insurance was built into the system by which members "who were obliged not only to maintain people who could not support themselves, but also to contribute to a mutual insurance to cover loss by fire or cattle disease."[2]

The follower of the goðar owed them military service. They were organized into platoons or companies based on their social status and equipment, which formed expeditionary armies or leiðangrs. Icelandic military tradition of the time followed closely developments in Norway. No organized cavalry formations or formations of projectile weapon equipped troops are recorded, instead bulk of the forces were formed in units of light, medium and heavy infantry, with bow and arrow equipped or rock throwing troops distributed among them operating as light support skirmishers. There was no professional or standing army, since Iceland did not fear attack—the seas were under Icelandic control.

Before the end of the Commonwealth at least 21 fortresses and castles had been built in Iceland.

During the Civil War that broke out as a result of the Christianization process between supporters of the new and of the old religion, the average battle consisted of little less than 1000 men with the average casualty rate of only 15 percent. This low casualty rate has been attributed to the blood-feud mentality that permeated Icelandic society which meant that the defeated army could not be slaughtered honorably to a man.

Life in the Commonwealth, however, was typically stable. Despite what has been described as minimal government, hence the system is often referred to as an anarchy, it took 300 years before civil war broke out, which was caused the challenge that Christianity presented to old beliefs and practices. In other words, it was a type of external intervention that finally caused the end of the commonwealth experiment.

In the early thirteenth century, the Sturlung era, the Commonwealth began to suffer from serious internal strife. The King of Norway began to exert pressure on his Icelandic vassals to bring the country under his rule. The term "Sturlung" is derived from the name of one of the chiefs who in 1220 agreed to recognize the authority of the Norwegian king. Encouraged by this the king tried to recruit additional vassals. This, combined with increased competition between the smaller number of chiefs, led to the civil war. Finally, the Icelandic chieftains agreed, after about 45 years of war, to accept Norway's Haakon IV as king by the signing of the Gamli sáttmáli ("Old Covenant") in 1262. This effectively brought the Commonwealth to an end.

The Icelandic Commonwealth has been cited as an example of how little or "small" government and the privatization of its functions can result in a stable and peaceful society. David Friedman says that the Commonwealth might well have been

invented by a mad economist to test the lengths to which market systems could supplant government in its most fundamental functions. Killing was a civil offense resulting in a fine paid to the survivors of the victim. Laws were made by a "parliament," seats in which were a marketable commodity. Enforcement of law was entirely a private affair. And yet these extraordinary institutions survived for over three hundred years, and the society in which they survived appears to have been in many ways an attractive one . Its citizens were, by medieval standards, free; differences in status based on rank or sex were relatively small; and its literary, output in relation to its size has been compared, with some justice, to that of Athens.[8]

Long argues that instability was created by the introduction of the Church tithe, which, collected by the goðar was unlinked with accountability. This introduced a "a monopolistic, non-competitive element in the system".[9] The tithe was territorially based, so citizens could not shift their loyalties. This led to the emergence of a small number of territorially powerful chiefs, who coerced or bribed other chiefs to transfer their tithe-collecting rights. Competition between these chiefs contributed to the civil war, as "the resulting struggle for hegemony among" what could now be described as "mini-states broke out into open conflict, a crisis that was finally resolved only when the Icelanders, exhausted by civil war, invited King Haakon of Norway to govern them, thus bringing the Free State period to a close".[9]

While it lasted, the commonwealth functioned at peace with itself, almost entirely because its citizens wanted to live in a stable society. The fact that until after the introduction of the tithe and the subsequent accumulation of wealth by a smaller number of chiefs, wealth appears to have been distributed equitably across Ireland. This, too, would have contributed to a general lack of crime and to the stability of the social fabric. Small government and a concern for equity remained a feature of Icelandic government so that even in the mid-nineteenth century, "there were only twenty-five full-time officials in the internal administration of the whole country." This "spirit of equality" does not "mean that people had equal financial means, but rather that the inequality was not great enough, or so socially ingrained, that there existed markedly different interests amongst the population.”[2]