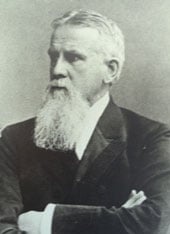 Friedrich Ratzel's photograph from the University of Leipzig

Friedrich Ratzel (August 30, 1844 – August 9, 1904) was a German geographer and ethnographer, notable for coining the term Lebensraum—"living space." His initial insight was that a social group of human beings in many ways functions similarly to an individual, organic organism, namely seeking the necessities for life and sufficient space in which to find or produce them—Lebensraum. However, this concept became problematic when focused specifically on the needs of German people, without regard for others or humankind as a whole. This self-centered viewpoint provided justification for the expansion of Germany and the subsequent suffering those in other nations, as well as support for social Darwinist rationalization for imperialist and racist policies generally.

Friedrich Ratzel was born on August 30, 1844 into an important family in Karlsruhe, Germany. His father was the head of the household staff of the Grand Duke of Baden, a position highly regarded at the time. Friedrich attended high school in Karlsruhe for six years before being apprenticed at age 15 to an apothecary.

In 1863 Ratzel went to Rapperswil on the Lake of Zurich, Switzerland, where he began to study the classics. After an additional year as an apothecary at Mörs near Krefeld in the Ruhr area (1865-1866), he spent a short time at the high school in Karlsruhe and later became a student of zoology at the universities of Heidelberg, Jena, and Berlin. He received his Ph.D. in 1868, and the following year published his first work—Sein und Werden der organischen Welt, a commentary on Charles Darwin and his ideas.

After the completion of his schooling, Ratzel started to travel, an experience that transformed him from a zoologist/biologist to geographer. He began fieldwork in the Mediterranean, writing letters about his experiences. These letters led to a job as a traveling reporter for the Kölnishe Zeitung newspaper, which provided him the means for further travel.

His career was interrupted by the Franco-Prussian War of 1870-1871. Ratzel joined the army, and traveled through Hungary and over the Carpathians, where he saw villages with German people living in a foreign land. This experience stimulated his interest in human geography and influenced his later work. After the war, Ratzel embarked on several expeditions, the lengthiest and most important being his 1874-1875 trip to North America, Cuba, and Mexico. He studied the influence of people of German origin in the United States, especially in the Midwest, as well as other ethnic groups in North America.

He produced a written work of his account in 1876, Stadte-ünd Culturbilder aus Nordamerika, which would help establish the field of cultural geography. According to Ratzel, cities are the best places to study people because life is "blended, compressed, and accelerated" in cities, and they bring out the "greatest, best, most typical aspects of people." Ratzel had traveled to cities such as New York, Boston, Philadelphia, Washington, D.C., New Orleans, and San Francisco to conduct his research.

Upon his return in 1875, Ratzel became a lecturer in geography at the Technical High School in Munich. In 1876 he was promoted to assistant professor, which rose to a full professorship in 1880. While at Munich, Ratzel produced several books and established his career as an academic. In 1886, he accepted an appointment at the University of Leipzig. His lectures were widely attended, notably by the influential American geographer Ellen Churchill Semple.

Ratzel produced the foundations of human geography in his three-volume Anthropogeographie from 1882 to 1891. This work was misinterpreted by many of his students, creating a number of environmental determinists. He published his work on political geography, Politische Geography, in 1897. It was in this work that Ratzel introduced concepts that contributed to Lebensraum and later to social Darwinism.

Ratzel continued his work at Leipzig until his sudden death on August 9, 1904, while on holiday with his wife and daughters in Ammerland, Germany.

Influenced by thinkers like Charles Darwin and zoologist Ernst Heinrich Haeckel, Ratzel wrote on a variety of topics, ranging from zoology and biology to geography, cultural geography, and geostrategy. His famous essay Lebensraum (1901), for example, dealt with the topic of biogeography. Through his writings, Ratzel created a foundation for the uniquely German variant of geopolitics—geopolitik.

Ratzel’s key contribution to geopolitik was the application of the biological concept of growth and development to geography. Until then, states with their borders were considered static, bound to a certain geographic location. States, however, according to Ratzel, are organic and growing, with borders representing only a temporary halt in their movement. Just like a biological organism grows and develops, it is not natural for states to be static. The expanse of a state’s borders is a reflection of the health of the nation.

Ratzel’s idea of Raum (space) grew from his organic state conception. His early concept of Lebensraum did not consider political or economic expansion, but rather spiritual and racial nationalist expansion. He regarded the Raum-motiv as a historical driving force, pushing peoples with great Kultur to naturally expand. Space, for Ratzel, was a vague concept, theoretically unbounded just as was Hitler’s later. Raum was defined by where German people live, where other weaker states could serve to support German people economically, and where German culture could fertilize other cultures. However, it ought to be noted that Ratzel did not use his concept of Raum in an aggressive manner, but he simply theorized about the natural expansion of strong states into areas controlled by weaker states.

Ratzel’s writings coincided with the development of the Second Industrial Revolution, after the Franco-Prussian War, and the subsequent search for markets, that brought Germany into competition with England. Influenced by the American geostrategist, Alfred Thayer Mahan, Ratzel wrote of aspirations for German naval reach, arguing that sea power, unlike land power, was self-sustaining, as the profit from international trade would pay for the merchant marines. Ratzel's writings were widely welcomed, especially as a justification for German imperial expansion.

Ratzel's writings, especially his concept of Lebensraum, were used in the development of Social Darwinism.

Ratzel influenced numerous scholars in the area of geopolitics. German geostrategist, Karl Haushofer, integrated Ratzel’s ideas on the division between sea and land powers into his own theories, adopting the view that borders are largely insignificant, especially as the nation ought to be in a frequent state of struggle with those around it.

Rudolf Kjellén was a famous Swedish student of Ratzel's, who further elaborated on his "organic state theory" and who coined the term “geopolitics.” Kjellen’s interpretation of Ratzel was very popular among Nazis, and was used as a justification for German expansionistic politics leading to World War II.

Retrieved from https://www.newworldencyclopedia.org/p/index.php?title=Friedrich_Ratzel&oldid=1004756
Categories:
Hidden category:
This page was last edited on 13 May 2017, at 20:59.
Content is available under Creative Commons Attribution/Share-Alike License; additional terms may apply. See Terms of Use for details.