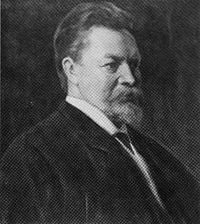 Johan Rudolf Kjellén (June 13, 1864 - November 14, 1922), was a Swedish social scientist, political scientist, and politician. He coined the term "geopolitics." Along with Alexander von Humboldt, Carl Ritter, and Friedrich Ratzel, Kjellén laid the foundations for the German geopolitik, which would later be espoused prominently by Karl Haushofer. Adolf Hitler and the Nazi party adopted policies in line with Kjellén’s and Haushofer's ideas, using them to justify and promote their aggressive expansion in Europe. Despite this unfortunate legacy, developments in geopolitics have come to serve the building of peaceful relationships among countries, and thus the establishment of a world of prosperity for all.

Johan Rudolf Kjellén was born on June 13, 1864 in Torsö, Sweden, into the a minister's family. He completed gymnasium in Skara in 1880 and matriculated at Uppsala University the same year. He received his Ph.D. in Uppsala in 1891 and was a docent there from 1890-1893.

Kjellén taught at Göteborg University from 1891, and was professor of political science and statistics there from 1901 until he received the prestigious Skyttean professorship of Eloquence and Government in Uppsala in 1916.

A conservative politician, Kjellén served several terms as a member of the Second Chamber of the Swedish parliament (from 1905 to 1908) and of its First Chamber (from 1911 to 1917).

Kjellén was a student of Friedrich Ratzel, elaborating on Ratzel’s organic state theory, and coining the term “geopolitics” to describe the study of international politics in terms of geographic factors. The basics of his ideas were presented in his book Der Staat als Lebensform (The State as a Living Form), published in 1916), which is generally regarded as his most important book in relation to geopolitics. It outlines five key concepts that would shape German geopolitik as developed by Karl Haushofer:

The three characteristics of a state, according to Kjellén , were Topopolitik , Physiopolitik, and Morphopolitik. The first two correspond to Lage and Raum which respectively mean position and territory, whereas Morphopolitik is connected with the shape and the form of a state.

Kjellén disputed the solely legalistic characterization of states, arguing that state and society are not opposites, but rather a synthesis of the two elements. He advocated that the state had a responsibility for law and order, but also for social welfare, and economic development.

According to Kjellén, autarky, or a self-sufficient economy that limits trade with the outside world, was the solution to political problems. He argued that dependence on imports would mean that a country would never be independent. Thus, a country, if wanted to become independent, must possess territories rich in resources. For Germany, Central and South-eastern Europe were key, along with the Middle East and Africa.

Rudolf Kjellén is credited with coining the term "geopolitics," although many of the ideas came from others. particularly Friedrich Ratzel, and it was developed by others, notably Karl Haushofer. Geopolitics gained prominence through the theories of Halford Mackinder of England with his "Heartland Theory."

Kjellén’s influence was particularly strong in Germany. His Der Staat als Lebensform (1917) became the basis for the concept of German geopolitik, although it was ideologically quite different from Kjellén’s social scientific concept. In laying the foundation for geopolitik in Germany, Haushofer adopted many of Kjellén's ideas. He particularly advocated autarky and its concommitant control over territory rich in resources, claiming that a nation constantly in struggle would demand self-sufficiency.

It is clear that Adolf Hitler adopted policies in line with Kjellén’s five key concepts, whether or not his writing was directly transmitted to Hitler via Haushofer. The Nazi party echoed Kjellén’s concept of state integration into every aspect of life, especially concerning the provision of social and economic welfare. The Nazis also targeted the same territories that Kjellén emphasized—they pursued economic domination throughout the former Austro-Hungarian states and the Balkans, monopolizing their output to the point where they could dictate those countries' production, while dumping German industrial goods into their markets.

Thus, while Kjellen himself did not advocate the aggressive growth of any one country at the expense of others, his theories were used by the German leadership to promote their expansionist goals. Despite this unfortunate history, geopolitical ideas have come to be used to promote peace.