Enid Mary Blyton (August 11, 1897 - November 28, 1968) was a popular and prolific British author of children's books. Blyton is noted for numerous series of books based on recurring characters and designed for different age groups. She produced more than 800 books that have enjoyed popular success in many parts of the world and have sold over 400 million copies.

She is probably best known for several book series, including those featuring Noddy, the Famous Five, and the Secret Seven. Though often criticized for their stereotyped characters, simple writing style, and didactic moralism, her books were widely translated and have remained internationally popular long after her death. Her success stemmed from her penchant for stories where children ride out their own adventures with minimal adult help.

In spite of her widespread popularity, Blyton has not held a stable place within the literary canon; stereotypical portrayals of race, gender, and class in her books have at times compelled libraries to withdraw some titles from circulation. However, as the literary discourse on children's literature continues to grow, Blyton's cultural significance and social relevance as an author continues to be of importance.

Blyton was born on August 11, 1897, at 354 Lordship Lane, East Dulwich, London, the eldest child of Thomas Carey Blyton (1870-1920), a salesman of cutlery, and Theresa Mary (1874 – 1950). Blyton had two younger brothers, Hanly (b. 1899), and Carey (b. 1902), who were born after the family had moved to the nearby suburb of Beckenham. From 1907 to 1915, Blyton was educated at St. Christopher's School in Beckenham, where she excelled. Her teenage ambition to become a writer was discouraged when several hundred pieces were rejected by publishers. 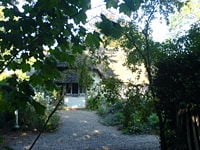 Blyton was a talented pianist, and her parents had hopes that she might play professionally. Instead, Blyton gave up her musical studies to teach. She taught for five years at Bickley, Surbiton, and Chessington, and wrote in her spare time. Her first book, Child Whispers, a collection of poems, was published in 1922.

On August 28, 1924, Blyton married Major Hugh Alexander Pollock (DSO) (1888-1971), editor of the book department in the publishing firm of George Newnes, which published two of her books that year. The couple moved to Buckinghamshire. By 1938, they moved to a house in Beaconsfield, famously named Green Hedges by Blyton's readers following a competition in Sunny Stories. The Pollocks had two children—Gillian Mary Baverstock (July 15, 1931-June 24, 2007) and Imogen Mary Smallwood (b. October 27, 1935).

In the mid-1930s, Blyton had an experience of a spiritual crisis, but she decided against converting to Roman Catholicism from the Church of England because she had felt it was too constricting. Although she rarely attended church services, she saw that her two daughters were baptized into the Anglican faith and went to the local Sunday School.

In 1942, Blyton and Pollock divorced; the following year, Blyton met Kenneth Fraser Darrell Waters (1892-1967), a London surgeon, with whom she had been friends. They married October 20, 1943, and she subsequently changed the surname of her two daughters to Darrell Waters. Pollock remarried and had little contact with his daughters thereafter. Blyton's second marriage found her happy with her role as a devoted doctor's wife and mother of her two daughters.

In 1957, Blyton was diagnosed with a digestive problem; to keep her from overworking, Blyton's husband led her to believe she was ill from a heart condition. Blyton's husband himself died in 1967. During the following months, she became increasingly ill. Afflicted by Alzheimer's disease, Blyton was moved into a nursing home three months before her death; she died at the Greenways Nursing Home Hampstead, London, on November 28, 1968, aged 71, and was cremated at Golders Green.

Blyton wrote hundreds of books for young and older children: Novels, story collections, and some non-fiction. An estimate puts her total book publication at around 800 titles, in addition to decades of magazine writing. It is said that at one point in her career, she regularly produced 10,000 words a day.

The early 1920s saw her career take off, with the publication of Child Whispers (1922) and Real Fairies: Poems (1923). By 1925, Blyton was writing an average of four to five thousand words daily, not only for her books for children, but also for educational journals and the Morning Post, a London newspaper. Among her magazine efforts was her work for the popular Sunny Stories for Little Folks, which she also edited from 1926 to 1952.

The publication of Adventures of the Wishing Chair in 1937 ,and its subsequent popularity cemented the style of fantasy that Blyton employed in her works during this period. The fantasy was simplistic and humorous, markedly different from the complex and more accomplished work of J.R.R. Tolkien, her contemporary whose own novel, The Hobbit, was published the same year.

Also notable was The Secret Island, published the following year. Like Adventures of the Wishing Chair, the book was released after first appearing in Sunny Stories. The Secret Island belonged to another genre that Blyton dominated—that of the adventure story. Sequels followed, with The Secret of Spiggy Holes in 1940, and The Secret Mountain published in 1941.

During World War II, most other writers were dormant, as restrictions on paper limited the literary output, but the popularity of Blyton’s work meant that she could continue to be published. For a few titles she began using the pseudonym, Mary Pollock, combining her middle name and her first married name. Even without the Blyton stamp, these works were just as successful. Her wartime contributions also included patriotic advice in her magazine columns. Even in her 1941 book, The Adventurous Four, Blyton employed strong patriotic themes and featured the uncovering of a German submarine base.

Blyton also made contributions to the girl’s school story genre, with The Naughtiest Girl in the School (1940) and its sequels. The second book of the series, The Twins at St. Clare’s (1941) was even serialized as a Japanese animated cartoon on television in 1991.

Blyton’s most famous series, The Famous Five, was introduced in 1942. The Five was made up of a familiar team of boys and girls. They included Julian, the rather condescending leader; Dick, often the one in Julian’s shadow; the tomboy George, whose real name was Georgina; Anne, George’s opposite—the stereotypically weak, inferior girl; and Timmy the dog.

By the late 1940s, Blyton was at the height of her dominance of popular fiction, continuing to produce book after book for more than twenty publishers in Britain. In 1949, she was commissioned by David White of the Sampson Low publishing house to write stories to be used with the artwork of Harmsen Van der Beek. This venture led to one of her most successful series, the Noddy books, which despite their popularity are the most critically derided of Blyton’s books. Critics have found fault with Noddy, who, as the title character, has few redeeming qualities. Noddy language has become a term used to describe banal idiocy. Blyton’s tendency to project attitudes that have since been labeled as racist is also apparent in the Noddy books, in which black and bad are equated.

Indeed Blyton's books are very much of their time, particularly those written in the 1950s. They present Britain's class system—that is to say, rough versus decent.[1] Many of Blyton's children's books similarly popularized negative stereotypes regarding gender, race, and class.

Between 1948 and 1960, Blyton produced more than 40 different religious story books including The Enid Blyton Bible Stories, which included a series of 14 books on the New Testament and 14 on the Old Testament.[2]

Her book, The Land of Far-Beyond is loosely modeled on John Bunyan's The Pilgrim's Progress (1678). It is an allegory that revolves around a journey that is spiritual as well as physical.

In the book a boy named Peter and his two sisters, Anna and Patience, travel from the City of Turmoil to the City of Happiness in the Land of Far-Beyond. With them are two other children, Lily and John, and five adults—Mr. Scornful, Mr. Fearful, Dick Cowardly, Gracie Grumble, and Sarah Simple. They have been warned to keep to the narrow path but they are beset by troubles and temptations on the way, causing them to stray from the path and into danger. Although Peter and his sisters finally make it to the City of Happiness, their companions do not. The book contains Biblical references and before they are permitted to enter the Land of Far-Beyond, Peter and the others have to decide which is the greatest of Faith, Hope, or Love.[3]

In 1953, Blyton wrote two prayers for the coronation of Queen Elizabeth II. She sent them to Buckingham Palace, and in her accompanying letter explained that: "Her Majesty The Queen has asked us all to pray for her on that day, and has told us simply and sincerely, what to pray for. Now, the children want to pray for her too, and I have been pressed to write for them a special Children's Prayer for The Queen on Coronation day—a prayer that all children here & overseas may say."[4] 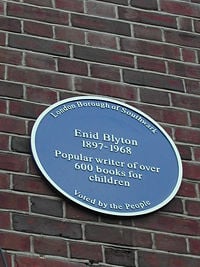 Enid Blyton wrote nearly 800 books over a 40-year career, many of them quite slim, as well as close to 5,000 short stories. She sold 200 million books in her lifetime, with few translations until the 1960s and 1970s, and has sold some 400 million altogether. About half of her titles are still in print, and they still sell 11 million copies a year, including a million for the Famous Five series and three million Noddy books.[5]

By one measure, Blyton is the sixth most popular author worldwide: over 3400 translations of her books were available in 2007 according to UNESCO's Index Translationum;[6] she is behind Agatha Christie and almost equal to Shakespeare.

The Enchanted Wood, a story from her Faraway Tree series, has been recorded by the actress Kate Winslet. Winslet was captivated by Blyton's stories at an early age, and during a pregnancy she approached the company who own the rights to the Enid Blyton material and asked them if they would be interested in having her record these stories on tape.

The Famous Five 1978 television series was produced by Southern Television for the ITV network in the UK, in 26 episodes of thirty minutes. Comic books, computer games, movies, and TV cartoons have all been produced based on Blyton's works.

Enid Blyton Day was first held in 1995, by the Enid Blyton Society and brings together more than one hundred people each summer for a day of all things Blyton. The day includes talks by noted speakers, displays of Blyton memorabilia, and representatives from some of the country's leading dealers of children's books.

Her work has been translated into nearly 90 languages. Her books were and still are enormously popular in Britain, Malta, India, Pakistan, New Zealand, Singapore, and Australia, and as translations, in former Yugoslavia, Japan, and across most of the globe.

Blyton has encountered criticism for her reductive, simplistic plots as much as for her now taboo portrayal of gender and racial stereotypes, and publishers have aimed to give some of Blyton a modern makeover with reprints of some of her works. Modern reprints of some books have had changes made to alter those details that could be viewed as offensive. This response from the publishers has itself drawn criticism from those adults who view it as tampering with an important piece of the history of children's literature.