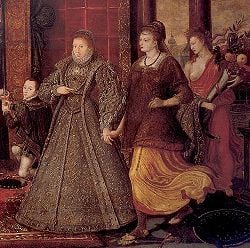 Elizabeth ushers in Peace and Plenty. Detail from The Family of Henry VIII: An Allegory of the Tudor Succession, c. 1572, attributed to Lucas de Heere.

The Elizabethan Age is the time period associated with the reign of Queen Elizabeth I (1558–1603) and is often considered to be a golden age in English history. It was an age considered to be the height of the English Renaissance, and saw the full flowering of English literature and English poetry. In Elizabethan theater, William Shakespeare, among others, composed and staged plays in a variety of settings that broke away from England's past style of plays. It was an age of expansion and exploration abroad, while at home the Protestant Reformation was established and successfully defended against the Catholic powers of the Continent.

The Elizabethan Age is viewed so highly because of the contrasts with the periods before and after. It was a brief period of largely internal peace between the English Reformation, with battles between Protestants and Catholics, and the battles between parliament and the monarchy that would engulf the seventeenth century. The Protestant Catholic divide was settled, for a time, by the Elizabethan Religious Settlement and parliament was still not strong enough to challenge royal absolutism.

England was well-off compared to the other nations of Europe. The Italian Renaissance had come to an end under the weight of foreign domination of the peninsula. France was embroiled in its own religious battles that would only be settled in 1598 with the Edict of Nantes. In part because of this, but also because the English had been expelled from their last outposts on the continent, the centuries long conflict between France and England was suspended during the Elizabethan era.

England’s one great rival was Spain, which fought with England both in Europe and the Americas in skirmishes that exploded into the Anglo-Spanish War of 1585–1604. An attempt by Philip II of Spain to invade England with the Spanish Armada in 1588 was famously defeated, but the tide of war turned against England with a disastrously unsuccessful attack upon Spain in 1589 called the Drake-Norris Expedition. Afterward, Spain provided some support for Irish Catholics in a draining guerrilla war against England, and Spanish naval and land forces inflicted a series of defeats upon English forces, which badly damaged both the English Exchequer and economy. Until then, English economics had been carefully restored under Elizabeth's guidance. English colonization and trade would be frustrated until the signing of the Treaty of London the year following Elizabeth's death, 1604.

During this period England had a centralized, well organized, and effective government, largely a result of the reforms of Henry VII and Henry VIII. Economically the country began to benefit greatly from the new era of Atlantic trade.

The Elizabethan era also saw England begin to play a leading role in the slave trade and saw a series of bloody English military campaigns in still Catholic Ireland—notably the Desmond Rebellions and the Nine Years' War.

Despite the heights achieved during the era, less than 40 years after the death of Elizabeth the country was to descend into the English Civil War.

Fashion and the Domestic Arts

Elizabethan court fashion was heavily influenced by Spanish and French styles. Notable garments of this period include the farthingale for women, military styles like the mandilion for men, and ruffs for both sexes.

The Elizabethan era also saw a great flowering of domestic embroidery for both clothing and furnishings. Predominant styles include canvas work generally done in tent stitch and blackwork in silk on linen. Toward the end of the reign the fashion for blackwork gradually gave way to polychrome work in silk that foreshadowed the crewelwork in wool that would dominate Jacobean embroidery.

The food of this time period included lear (an oatmeal like dish with peas or beans), all types of animal meat, and numerous types of fruits and vegetables. A banquet was used for a dessert or snack course. 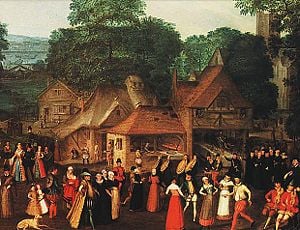 During the Elizabethan era, the years were broken up by annual holidays just as they are in the present age. People looked forward to each and every holiday because their opportunities for leisure were limited. Time away from hard work was restricted to periods after church on Sundays, and so for the most part, leisure and festivities took place on a public church holy day. Every month had its own holiday, some of which are listed below: