Djenné (also Dienné or Jenne) is a historically and commercially important small city in the Niger Inland Delta of south-central Mali. It is just west of the Bani River, with the Niger River passing to the west and north. It is an important agricultural market center. Administratively part of the Mopti Region, the city has an ethnically diverse population of between 12,000-15,000. Historically, Djenné was a center of trade and learning, and is one of the oldest known cities in sub-Saharan Africa.

The city is famous for its mud brick (adobe) architecture, most notably the Great Mosque of Djenné, considered by many architects to be the greatest achievement of the Sudano-Sahelian architectural style. It is the largest mud brick or adobe building in the world. Though the current mosque was rebuilt in 1907, the original mosque presided over one of the most important Islamic learning centers in Africa during the Middle Ages. Thousands of students came to study the Qur'an in Djenné's madrassas.

Djenne's Old City displays an outstanding example of historic architecture of the the pre-Islamic period. It has been described as both "the most beautiful city of Africa" as well as the "typical African city." Today's residents of Djenne have shown an active desire to preserve their heritage. Their skilled and highly respected masons maintain the buildings while passing on architectural know-how and traditions. An annual festival is held specifically to perform maintenance on the mosque, in which all townspeople take part.

Both the city's old section, as well as the Mosque itself, have been designated as a UNESCO World Heritage Site for their important historical and cultural significance.

Djenné, a town in south-central Mali, was founded in approximately 250 B.C.E. by the Bozo people at a site known as Djenné-Jeno (or Jenné-Jeno), slightly less than one mile (1.5 km) upstream of the current location. It is believed that at its height it may have been a city of more than 15,000 people.

It moved to its present location in either the eleventh or the thirteenth century, when the city converted to Islam. This change increased its importance as a market base for gold, slaves, and salt in trans-Saharan trade. It soon rivaled Timbuktu in prosperity and Muslim culture, and many merchants from North Africa were attracted to it.

Djenné, despite its proximity, was never part of the Mali Empire. It existed as an independent city-state protected by walls and the geography of the inland delta. According to legend, the Mali Empire attempted to conquer the city 99 times before giving up. Djenné would not be conquered until 1473 by the Songhai Empire under Sonni Ali. The siege of Djenné is said to have lasted seven months and seven days culminating in the death of the city's king and its capitulation. The widow of the city married Sonni Ali, and peace was restored. In 1591, Morocco conquered the city after destroying Songhai's hold in the region. By the 1600s, Djenné had become a thriving center of trade and Muslim learning. Caravans from Djenné frequented southern trading towns like Begho, Bono Manso, and Bonduku.

The city continued to change hands several times. It was part of the Segou kingdom from 1670 to 1818, Massina under the Fulani ruler Amadou Lobbo from 1818 to 1861, and the Toucouleur Empire under Umar Tall from 1861 to 1893. The French finally conquered the city that year. During this period, trade declined and the city's importance with it.

The modern-day city contains numerous archaeological sites and several fine examples of Muslim architecture, including the Great Mosque of Djenné, the largest mud-brick building in the world. Other attractions include the tomb of Tupama Djenepo, who in legend was sacrificed on the founding of the city, and the remains of Jenné-Jeno. 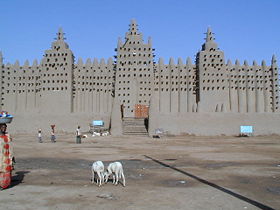 The Great Mosque's signature trio of minarets overlooks the central market of Djenné.

The Great Mosque of Djenné is the largest mud brick or adobe building in the world and is considered by many architects to be the greatest achievement of the Sudano-Sahelian architectural style, albeit with definite Islamic influences.

The first mosque on the site was built in the thirteenth century, but the current structure dates from 1907. As well as being the center of the community of Djenné, it is one of the most famous landmarks in Africa. Along with the "Old Towns of Djenné" it was designated a World Heritage Site by UNESCO in 1988.

The Great Mosque is unusual among West African mosques in that its site was not sacred prior to its establishment—the location was previously occupied by a palace. Other mosques were built on the same locations as conical, mud-brick or stone spires representing the protective spirits of ancestors. Some scholars of Islamic architecture, such as Labelle Prussin, believe that these conical spires were integrated into the design of mosques throughout Mali, and point to the Great Mosque as the most prominent example. 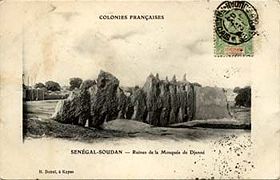 Ruins of the original mosque, as seen in this turn of the century French postcard.

The site has been the location of a mosque since the original building was commissioned by Koi Kunboro in 1240,[3] when Mali converted to Islam, prior to the city's central emergance within the empires of Mali and later Songhai. The original structure, as the modern one, was made with mudbrick.

The original structure was destroyed in 1834 through intentional flooding. The only portion of the original building that survives is an enclosure containing the graves of local leaders. A re-creation of the original was completed in 1896 but was subsequently demolished to make way for the current structure.

Construction on the current Great Mosque began in 1906 and was probably completed in 1907 or 1909. The mosque's construction was supervised and guided by the head of Djenné's mason guild, Ismaila Traoré. At the time, Djenné was part of the colony of French West Africa and the French may have offered political and economic support for the construction of both the mosque and a nearby madrasa.

Electrical wiring and indoor plumbing have been added to many mosques in Mali. In some cases, the original surfaces of a mosque have even been tiled over, destroying its historical appearance and in some cases compromising the building's structural integrity. While the Great Mosque has been equipped with a loudspeaker system, the citizens of Djenné have resisted modernization in favor of the building's historical integrity. Many historical preservationists have praised the community's preservation effort, and interest in this aspect of the building grew in the 1990s.

The Great Mosque was closed to non-Muslims after a fashion photography shoot on the roof and in the interior prayer-hall offended or was considered in violation of a previous agreement with local leaders. 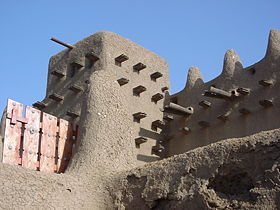 Bundles of deleb palm wood embedded in the walls of the Great Mosque reduce stress from extreme variations in climate and served as scaffolding for annual repairs.

The walls of the Great Mosque are made of sun-baked mud bricks called ferey, a mud based mortar, and are coated with a mud plaster which gives the building its smooth, sculpted look. The walls are between 16 and 24 inches (0.4 to 0.6 m) thick. The thickness varies depending on the wall's height: taller sections were built thicker because the base has to be wide enough to support the weight. Bundles of deleb palm wood were included in the building to reduce cracking caused by frequent drastic changes in humidity and temperature and to serve as readymade scaffolding for annual repairs. The walls insulate the building from heat during the day and by nightfall have absorbed enough heat to keep the mosque warm through the night.[3] Gutters, made of ceramic pipes, extend from the roofline and direct water drainage from the roof away from the walls. The prayer wall or qibla of the Great Mosque faces east towards Mecca and overlooks the city marketplace. The qibla of the mosque is dominated by three large, box-like minarets jutting out from the main wall and has eighteen buttresses. Each minaret contains a spiral staircase leading to the roof, and on top of each minaret is a cone shaped spire said to be topped with an ostrich egg.

Half of the mosque is covered by a roof and the other half is an open air prayer hall or courtyard. The roof of the mosque is supported by ninety wooden pillars that span the interior prayer hall. Vents in the roof are topped with removable ceramic caps, which when removed allow hot air to rise out of the building and so ventilate the interior. A second prayer hall is enclosed in a courtyard behind the roofed mosque and is surrounded by walls to the north, south, and west and by the mosque itself to the east. An arcade inside the surrounding walls encircles the courtyard. The walls of the arcade facing the courtyard are punctuated by arched openings, 45 feet (15 meters) high, that allow viewing or entry into the courtyard from the arcade.

Water damage, in particular flooding, was a major concern of Traoré when he planned the construction. The annual flooding of the Bani River causes Djenné to become an island, and unusually high floods can inundate parts of the city. The Great Mosque was constructed on a raised platform with a surface area of 62,500 square feet (5,625 sq m), which has so far protected the mosque from even the most severe floods.

The original mosque presided over one of the most important Islamic learning centers in Africa during the Middle Ages. Thousands of students came to study the Qur'an in Djenné's madrassas. The historic areas of Djenné, including the Great Mosque, were designated a World Heritage Site by UNESCO in 1988. While there are many mosques that are older than its current incarnation, the Great Mosque remains the most prominent symbol of both the city of Djenné and the nation of Mali.

The citizens of Djenné express their respect for the mosque through an annual festival. Though it includes music and food, the primary focus of the festival is the maintenance of the mosque. Yearly damage, mostly in the form of erosion, occurs to the building. Every part of the community has a role to play: young boys prepare plaster, men carry the plaster containers and climb the heights to fill in cracks, women and girls carry water to the pits before the festival and to the workmen on the mosque during it. Members of Djenné's masons guild direct the work, while elderly members of the community, who have already participated in the festival many times, sit in a place of honor in the market square overseeing the proceedings.

The inhabitants of Djenné mostly speak a Songhay variety termed Djenné Chiini, but the languages spoken also reflect the diversity of the area. The villages around it variously speak Bozo, Fulfulde, or Bambara.

Approximately eight hours by road from Bamako, Djenné is notable in that it becomes an island when the rivers rise at the end of the rainy season. However, problems of a different nature were reported in 2008 when it was said that Djenné was "drying up" because of a controversial dam, completed in 2007, across the Bani River at Talo, about 93 miles (150 km) upstream. [4]

The weekly market, when buyers and sellers converge on the town from the surrounding regions, is a key tourist attraction.