Prince Metternich, conductor of the Concert of Europe

The Concert of Europe was the balance of power that existed in Europe from the fall of Napoleon Bonaparte to the outbreak of World War I. Its founding members were the UK, Austria, Russia, and Prussia, who were also members of the 6th Coalition (Quadruple Alliance) responsible for the downfall of Napoleon I; in time France became established as a fifth member of the "club." The leading personalities of the system were British foreign secretary Lord Castlereagh, Austrian Chancellor Prince Klemens Wenzel von Metternich and Alexander I the Tsar of Russia. The Concert of Europe, also known as the Congress System, was the result of a custom, following the era of Napoleon and the French Revolution, adopted by the old great powers of Europe of meeting from time to time in an International Conference, or Congress, in order to plan a solution by mutual agreement (hence "concert"), whenever some problem arose that threatened peace between European nations. It lasted between 1814 and 1914 and in time assumed an official status of the type of the League of Nations which, while not in itself an entity, was an informal organization of the nations of Europe.

The Congress of Berlin, in 1878, fully settled issues surrounding newly emerging states in the Balkans and relations between Europe and the Ottomans. Arguably, this raised the Concert of Europe to the status of the de facto government of the world. The Concert, however, lacked real accountability and represented European interests, not those of the colonized or of non-European states. The idea of a body that could bring senior representatives of nation-states together and enable cooperation fed into the formation of the League of Nations. It has been argued that the notion of Europe as a shared-space is itself a by-product of the Concert's legacy. It was the conviction that Europe's people could put past conflict and rivalry behind them, to build a trans-national space based on the principles of freedom, human rights and equality that resulted in the formation of the European Union. The difference is that war was not unthinkable for the Concert, as long as it took place outside Europe; the new European body wants to make war "unthinkable and materially impossible."

The Congress System's first primary objectives were to

In this historians have generally agreed that they were successful as there was no major war pitting the Great Powers against each other until the Crimean War forty years later, and France was successfully re-integrated back into Europe joining the alliance in 1818 at the Congress of Aix-la-Chapelle. However after this success the Concert of Europe gradually fell apart mainly because of disagreements between the great powers, particularly between Britain and the countries with more conservative constitutions (who were also members of the Holy Alliance). Despite the overall failure of the Congress System it marked an important step in European and World diplomacy. In its approximately 85 year life, it had erected an imposing structure of international law. 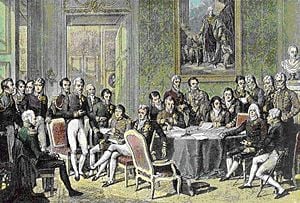 The Congress of Vienna by Jean-Baptiste Isabey, 1819.

The French Revolution of 1789 spurred a great fear among the leading powers in Europe of the lower classes violently rising against the Old powers to solve the pressing issues (mainly suppressing revolutions against monarchs) at the time; however, the Congress System began to deteriorate with Britain removing itself and a bitter debate over the Greek War of Independence. Even though one more Congress was held between the five major powers at St Petersburg in 1825, the Congress system had already broken down. Despite that, the "Great Powers" continued to meet and maintained peace in Europe. It started a framework of international diplomacy and negotiation in a continent torn by war. One good example of this is in 1827 when three of the Great Powers (Britain, France and Russia) joined in the Battle of Navarino to defeat an Ottoman fleet.

Results of the Concert 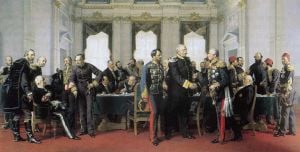 The Congress of Berlin by Anton von Werner.

The Concert's principle accomplishment was the securing of independence for Greece (1830) and Belgium (1831). In 1840, the powers (except France) intervened in defense of the Ottoman Empire (against which they had supported Greece) to end Egypt's eight-year occupation of Syria.

The 1878 Congress of Berlin, the high point since Vienna, established a committee to oversee the finances of the Ottoman Empire, which was in debt to the European Powers, ceded Cyprus to Great Britain, Bosnia to Austria and recognized Montenegro, Serbia, and Romania as independent states.

Demise of the Concert

The demise of the Concert was a slow process. Demands for revision of the Congress of Vienna's frontiers along national lines weakened it; Germans and Italians wanted to unify their small states, while parts of the Austrian Empire wanted independence. The Concert was further weakened by successive wars between participants, which it was meant to prevent—the Crimean War (1854-56), the Italian War of Independence (1859), the Austro-Prussian War (1866), and the Franco-Prussian War (1870-71). 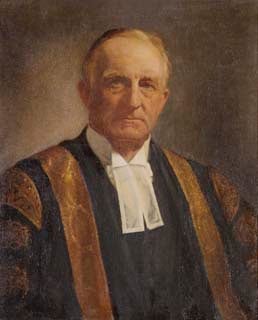 Lord Edward Grey tried unsuccessfully to convene the Concert of Europe to prevent World War I.

Some have described the Concert of Europe as a "ancestor of the League of Nations. Others describe the Concert as in fact the "opposite of an international organization trying to work within the limits of international law" since it "lacked a secretariat and rules of conduct."[1] On the eve of World War I, the British Foreign Minister Lord Edward Grey tried to convene the Concert to prevent hostilities but failed. It was, though, this very failure that made him and others all the more determined to establish a body which at the very least could call a "meeting of major powers at short notice to try to prevent war."[1] That proposed body became the League of Nations. In some respects, this did build on the legacy of the Concert, even if a major concern was not to replicate mistakes. The fact that the Concert had lacked a formal mechanism meant that the new body would have one, and member states would commit themselves to its Covenant, which included the "acceptance of obligations not to resort to war."[2] Unfortunately, the League lacked any means to enforce the Covenant and nations, acting in self-interest, broke its terms. The League could not prevent World War II just as the Concert couldn't prevent the previous world war. It The next world body, the United Nations represented a significant departure, at least in principle and theory if less so in practice.

While preventing war remains a fundamental aim, this is arguably secondary to creating a more peaceful world through such initiatives as UNESCO which set out to "build the defenses of peace in the minds of men."[3] In addition, the UN has sponsored such initiatives as International Decade for a Culture of Peace and Non-Violence, which aims to change the way people think and act so that non-violent resolution of disputes becomes an automatic priority.[4] Also, at least in theory, the United Nations has a mechanism to enforce resolution, the United Nations Security Council. It also recognizes that in the end it is the people of the world, not nations that will demand peace and reject violence. The preamble to the Charter begins "we the peoples"[5] and increasingly the organization has attempted to work with civil society across the globe.[6]

The Concert of Europe and the Cold War 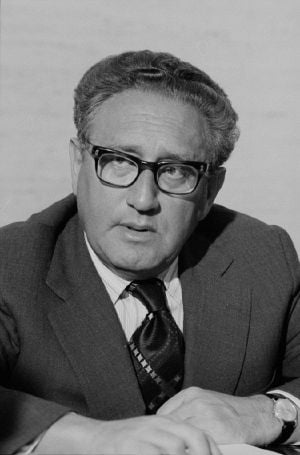 Kissinger's Harvard University PhD was about the Concert of Europe, A World Restored.

In his 1957 book, A World Restored (his 1954 doctoral thesis) the future United States Secretary of State Henry Kissinger based proposals for a "stable international order" on his study of the Concert of Europe. He argued that peace and stability in a conflict prone world was best guaranteed by ensuring an equilibrium of force and power. Writing in the context of the Cold War, this meant a balance of power between the Western allies and the Communist bloc. He wrote, "the security of a domestic order resides in the preponderance power of authority, that of an international order in the balance of forces, and in its expression, the equilibrium … But it is constructed in the name of a legitimizing principle."[7]

To a considerable extent, the "balance of power" doctrine prevented direct conflict between the two sides during the Cold War, although proxy battles were fought. However, the two major powers depended on the probability of mutually assured destruction were they too attack. Both sides maintained large and expensive military; the idea was always present that either would use force if necessary. The mentality was defensive rather than aggressive but both sides saw themselves as military powers. The peace, it was believed, was maintained by the threat of war, therefore possessing and improving the means to make war remained a dominant political goal. In contrast, others argue that disarmament ought to be a priority, that while this will not of itself "produce world peace … the elimination of weapons of mass destruction, illicit arms trafficking, and burgeoning weapons stockpiles would advance both peace and development goals," which is the aim of the UN Office for Disarmament.[8]

The new European institutions that evolved following World War II with the express intent of permanently banishing war from the European space and of nurturing a culture of peace and solidarity can also be understood as building on the legacy of the Concert of Europe. The Concert demonstrated that the governments of Europe could collaborate if they chose to even if what was agreed or achieved was modest. The founding fathers of the Council of Europe and of the European Union, however, did not only want to prevent war; they set out to make war both unthinkable and materially impossible. From factories that had made weapons, they would produce products aimed at "aim of contributing to raising living standards and to promoting peaceful achievements" throughout the whole world.[9] On the one hand, it was the Concert of Europe that, arguably, generated the idea that Europe could become a common space; "Europe as a normative idea became institutionalized in the Congress system of the Concert of Europe." On the other hand, the idea of a united Europe represented by the Concert was "negative" since "more of one power meant less of another" and the peace that was kept in Europe during at least some of the Concert era was at the cost of war in Africa and Asia.[10] The new European space would work to end all war, convinced that nurturing peace requires as much effort as making war; "World peace cannot be safeguarded without the making of creative efforts proportionate to the dangers which threaten it.[9]

Retrieved from https://www.newworldencyclopedia.org/p/index.php?title=Concert_of_Europe&oldid=894477
Categories:
Hidden category:
This page was last edited on 4 January 2009, at 22:45.
Content is available under Creative Commons Attribution/Share-Alike License; additional terms may apply. See Terms of Use for details.