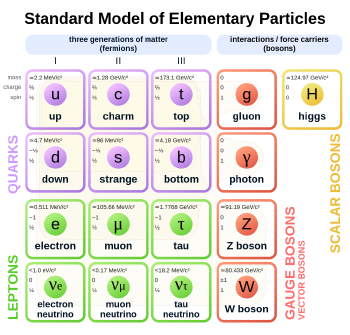 The Standard Model of elementary particles, with the gauge bosons in the last column.

In particle physics, bosons are particles that obey Bose-Einstein statistics and are named after Satyendra Nath Bose and Albert Einstein. In contrast to fermions, which obey Fermi-Dirac statistics, several bosons can occupy the same quantum state. Thus, bosons with the same energy can occupy the same place in space. Therefore, bosons are often considered as force carrier particles, whereas fermions are usually associated with matter, although the distinction between the two concepts is not clear cut in quantum physics.

Most bosons are composite particles, but in the Standard Model, there are five bosons that are elementary:

Composite bosons are important in superfluidity and other applications of Bose-Einstein condensates.

The name boson was coined by Paul Dirac[1] to commemorate the contribution of Satyendra Nath Bose, an Indian physicist and professor of physics at the University of Calcutta and at the University of Dhaka, who developed, in conjunction with Albert Einstein, the theory characterizing such particles, now known as Bose–Einstein statistics.[2]

By definition, bosons are particles which obey Bose-Einstein statistics: When one swaps two bosons, the wavefunction of the system is unchanged.[3] Fermions, on the other hand, obey Fermi-Dirac statistics and the Pauli exclusion principle: Two fermions cannot occupy the same quantum state as each other, resulting in a "rigidity" or "stiffness" of matter which includes fermions. Thus fermions are sometimes said to be the constituents of matter, while bosons are said to be the particles that transmit interactions (force carriers), or the constituents of radiation. The quantum fields of bosons are bosonic fields, obeying canonical commutation relations.

The properties of lasers and masers, superfluid helium-4 and Bose–Einstein condensates are all consequences of statistics of bosons. Another result is that the spectrum of a photon gas in thermal equilibrium is a Planck spectrum, one example of which is black-body radiation; another is the thermal radiation of the opaque early Universe seen today as microwave background radiation. Interaction of virtual bosons with real fermions are called fundamental interactions, and these result in all forces we know. The bosons involved in these interactions are called gauge bosons.

In large systems, the difference between bosonic and fermionic statistics is only apparent at large densities—when their wave functions overlap. At low densities, both types of statistics are well approximated by Maxwell-Boltzmann statistics, which is described by classical mechanics.

In addition, the Standard Model postulates the existence of Higgs bosons, which give other particles their mass via the Higgs mechanism. In particular, the Higgs boson explains why the photon has no mass, while the W and Z bosons are very heavy. Elementary particle masses, and the differences between electromagnetism (mediated by the photon) and the weak force (mediated by the W and Z bosons), are critical to many aspects of the structure of microscopic (and hence macroscopic) matter. In electroweak theory, the Higgs boson generates the masses of the leptons (electron, muon, and tau) and quarks. As the Higgs boson is massive, it must interact with itself.

On July 4, 2012 the two main experiments at the LHC (ATLAS and CMS) both reported independently that they found a new particle with a mass of about 125 and 127 GeV/c2 (about 133 proton masses, on the order of 10−25 kg), which is "consistent with the Higgs boson."[5] On March 14, 2013 the Higgs Boson was tentatively confirmed to exist,[6] with subsequent experiments confirming the finding. In the mainstream media, the Higgs boson has been called the "God particle" after the 1993 book The God Particle by Nobel Laureate Leon Lederman.[7]

Finally, many views about quantum gravity postulate a force carrier for gravity, the graviton, which is a boson of spin 2.

Composite particles (such as hadrons, nuclei, and atoms) can be bosons or fermions depending on their constituents. More precisely, because of the relation between spin and statistics, a particle containing an even number of fermions is a boson, since it has integer spin.

Examples include the following:

The number of bosons within a composite particle made up of simple particles bound with a potential has no effect on whether it is a boson or a fermion.

Fermionic or bosonic behavior of a composite particle (or system) is only seen at large (compared to size of the system) distance. At proximity, where spatial structure begins to be important, a composite particle (or system) behaves according to its constituent makeup. For example, two atoms of helium-4 cannot share the same space if it is comparable by size to the size of the inner structure of the helium atom itself (~10−10 m)—despite bosonic properties of the helium-4 atoms. Thus, liquid helium has finite density comparable to the density of ordinary liquid matter.

Retrieved from https://www.newworldencyclopedia.org/p/index.php?title=Boson&oldid=1092394
Categories:
Hidden category:
This page was last edited on 22 December 2022, at 17:22.
Content is available under Creative Commons Attribution/Share-Alike License; additional terms may apply. See Terms of Use for details.