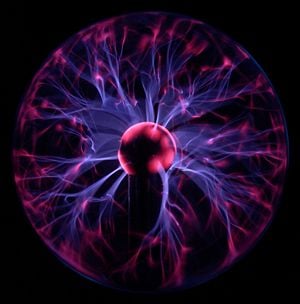 The filamentation from a plasma lamp indicates the anisotropic nature of plasmas.

Anisotropy is a term used in various scientific disciplines to indicate that certain properties of matter (such as a material or radiation) vary with the direction from which they are measured. For instance, if the refractive index or density of a material is different when measured along different axes, that property is said to be anisotropic. Anisotropy is the opposite of isotropy, a term used when properties are the same when measured from any direction.

The investigation of properties, whether isotropic or anisotropic, can provide a lot of useful information. For example, the anisotropic passage of electromagnetic radiation through a crystal can help reveal the internal structure of the crystal. The use of materials in construction projects benefits from knowledge of the strength of each material varies depending on its orientation. The anisotropies detected in the cosmic microwave background radiation supports the Big Bang theory for the origin of the universe. The measurement of anisotropy in seismic data can provide information about the Earth's internal processes and mineralogy. Anisotropy is also useful in medicine, such as for ultrasound imaging.

The stiffness of a material is often anisotropic. The Young's modulus (which measures stiffness) depends on the direction of the load.

Many crystals are anisotropic to light (optical anisotropy), exhibiting properties such as birefringence. Crystal optics describes light propagation in crystals. An axis of anisotropy is defined as the axis along which isotropy is broken (or an axis of symmetry, such as normal to crystalline layers). Some materials have multiple such optical axes.

In polycrystalline materials, anisotropy can be due to certain texture patterns produced during manufacture of the material. In the case of rolling, "stringers" of texture are produced in the direction of rolling, which can lead to vastly different properties in the rolling and transverse directions.

Some materials, such as wood and fiber-reinforced composites, are very anisotropic, being much stronger along the grain/fiber than across it. Metals and alloys tend to be more isotropic, though they can sometimes exhibit significant anisotropic behavior. This is especially important in processes such as deep-drawing of metals. Cosmologists use the term anisotropy to describe small temperature fluctuations in the cosmic microwave background radiation. The nature of this radiation supports the Big Bang theory for the origin of the universe.

In physics, the term anisotropy can be applied in various cases. For example, the term may be used to indicate that a plasma has a magnetic field oriented in a preferred direction, or that the plasma shows "filamentation," as in the case of lightning or a plasma lamp.

Seismic anisotropy is the variation of seismic wave speed with direction. It is an indicator of long-range order in a material, where features smaller than the seismic wavelength (such as crystals, cracks, pores, layers, or inclusions) have a dominant alignment. Significant seismic anisotropy has been detected in the Earth's crust, mantle, and inner core. Measuring the effects of anisotropy in seismic data can provide important information about processes and mineralogy in the Earth.

Geological formations with distinct layers of sedimentary material can exhibit electrical anisotropy: Electrical conductivity in one direction (such as parallel to a layer) may be different from that in another (such as perpendicular to the layer). This property is used by the gas and oil exploration industry to identify hydrocarbon-bearing sands in sequences of sand and shale. Sand-bearing hydrocarbon assets have high resistivity (low conductivity), whereas shales have lower resistivity. Formation evaluation instruments measure this conductivity/resistivity, and the results are used to help find oil and gas wells.

In the field of computer graphics, an anisotropic surface is one that changes in appearance when rotated about its geometric normal, as is the case with velvet.

Anisotropic filtering (AF) is a method of enhancing the image quality of textures on surfaces that are far away and steeply angled with respect to the point of view. Older techniques, such as bilinear and trilinear filtering, did not take into account the angle from which a surface is viewed, resulting in the blurring of textures. By reducing detail in one direction more than another, these effects can be reduced.

Anisotropic filtering in computer graphics should not be confused with a "chemical anisotropic filter," which is used for filtering particles and has a different meaning. This term is used to describe a filter with increasingly smaller interstitial spaces in the direction of filtration, so that larger particles are filtered out before the smaller ones. This type of filter results in greater flow-through and more efficient filtration.

Microfabrication processes use anisotropic etching techniques (such as Deep reactive ion etching) to create well-defined microscopic features with a high aspect ratio. These features are commonly used in MEMS and microfluidic devices, where the anisotropy of the features is needed to impart desired optical, electrical, or physical properties to the device.

Anisotropy is also useful for medical ultrasound imaging. When the angle of the transducer is changed, the echogenicity of soft tissues (such as tendons) may be found to change.

In diffusion tensor imaging, anisotropy alterations may indicate diffusion changes of water in the brain, particularly in the white matter.

Retrieved from https://www.newworldencyclopedia.org/p/index.php?title=Anisotropy&oldid=1054438
Categories:
Hidden category:
This page was last edited on 20 June 2021, at 07:32.
Content is available under Creative Commons Attribution/Share-Alike License; additional terms may apply. See Terms of Use for details.