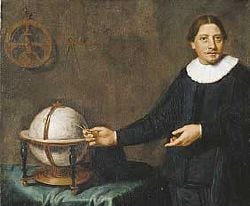 Abel Janszoon Tasman (1603 – October 10, 1659), was a Dutch seafarer, explorer, and merchant. Tasman is best known for his voyages of 1642 and 1644 in the service of the VOC (United East India Company). He was the first known European expedition to reach the islands of Van Diemen's Land (now Tasmania) and New Zealand and to sight the Fiji islands, which he did in 1643. Tasman, his navigator Visscher, and his Merchant Gilsemans also mapped substantial portions of Australia, New Zealand and the Pacific Islands. Tasman was one of a wave of European seafarers and explorers whose journeys, navigation skills and map making aided both the colonial and the commercial enterprises of the expanding imperial powers. The Dutch Empire emerged as the third largest.

The Enlightenment had placed humanity at the center of the world, which people now wanted to understand scientifically and geographically to place resources known and yet to be discovered at the service of humankind, to make human life happier. Little thought at this stage was given to the rights or happiness of the animal world or even of the indigenous people whose lands were settled as a result of colonial expansion. The island that Tasman claimed on December 3, 1642, later known as Tasmania, would become a British colony. Its Aborigine population was decimated at the hands of the European interlopers. While Tasman can not be blamed for this genocide, it represents an example of the negative aspect of the colonial enterprise, which Tasman's voyages helped make possible. However, from the perspective of a value based understanding of history, positively, colonialism also joined the world together. Humanity can only develop a new consciousness of the inter-connectedness and sanctity of all life, of shared responsibilities to steward, protect and preserve the planet, because people across the globe were first made aware that they all belong to the same human family.

Abel Tasman was born in 1603 in Lutjegast, the Netherlands, a village in the province of Groningen. He was first heard of at the end of 1631 when, as a widower living at Amsterdam, he married Jannetjie Tjaers. He was shortly afterwards in the service of the (Dutch) United East India Company and by 1634 was mate of a ship trading from Batavia (now Jakarta) to the Moluccas. In July of that year he was appointed master of a small ship, the Mocha. He visited Holland in 1637 and returned to Batavia in October 1638, taking his wife with him.

In 1634 Tasman was sent as second in command of an exploring expedition in the north Pacific. His fleet included the ships Heemskerck and Zeehaen. After many hardships Formosa (now Taiwan) was reached in November, 40 out of the crew of 90 having died. Other voyages followed, to Japan in 1640 and 1641 and to Palembang in the south of Sumatra in 1642, where he made a friendly trading treaty with the Sultan. In August 1642 Tasman was sent in command of an expedition for the discovery of the "Unknown Southland," which was believed to be in the south Pacific but which had not been seen by Europeans. Strange as it may seem to us today, Tasman sailed first to Mauritius. The reason for this was that his ships were sailing ships and the best route from one place to another was not always the direct route; of more importance was the direction of the wind. Tasman had some knowledge of the prevailing winds and so he chose Mauritius as a turning point and from there a course was set towards what was presumed to be the southern coast of Australia. (At least part of the western shore of the continent was already known to the Dutch, but the shape of the southern coast was unknown).

On November 24, 1642, Tasman sighted the west coast of Tasmania near Macquarie Harbor. He named his discovery Van Diemen's Land after Anthony van Diemen, Governor-General of the Dutch East Indies. Proceeding south he skirted the southern end of Tasmania and turned north-east until he was off Cape Frederick Hendrick on the Forestier Peninsula. An attempt at landing was made but the sea was too rough; however, the carpenter swam through the surf, and, planting a flag, Tasman claimed formal possession of the land on December 3, 1642.

After some exploration, Tasman had intended to proceed in a northerly direction but as the wind was unfavorable he steered east. On December 13, they sighted land on the north-west coast of the South Island, New Zealand, becoming the first Europeans to do so. Tasman named it Staten Landt on the assumption that it was connected to an island (Staten Island, Argentina) at the south of the tip of South America. Proceeding north and then east one of his boats was attacked by Māori in waka, and four of his men were killed. It has recently been suggested that some of Tasman's sailors briefly landed here on December 18, 1642. Tasman named it Murderers' Bay (now known as Golden Bay) and sailed north, but mistook Cook Strait for a bight (naming it Zeehaen's Bight). Two names that he bestowed on New Zealand landmarks still endure: Cape Maria van Diemen and Three Kings Islands (Cabo Pieter Boreels is now known as Cape Egmont).

En route back to Batavia, Tasman came across the Tongan archipelago on January 20, 1643. While passing the Fiji Islands Tasman's ships came close to being wrecked on the dangerous reefs of the north-eastern part of the Fiji group. He charted the eastern tip of Vanua Levu and Cikobia before making his way back into the open sea. He eventually turned north-west to New Guinea, and arrived at Batavia on June 15, 1643. 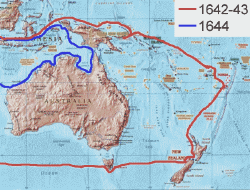 With three ships on his second voyage (Limmen, Zeemeeuw and the tender Braek) in 1644, he followed the south coast of New Guinea eastward. He missed the Torres Strait between New Guinea and Australia, and continued his voyage along the Australian coast. He mapped the north coast of Australia making observations on the land and its people.

From the point of view of the Dutch East India Company Tasman's explorations were a disappointment: he had neither found a promising area for trade nor a useful new shipping route. For over a century, until the era of James Cook, Tasmania and New Zealand were not visited by Europeans—mainland Australia was visited, but usually only by accident.

On November 2, 1644, Abel Tasman was appointed a member of the Council of Justice at Batavia. He went to Sumatra in 1646, and in August 1647 to Siam (now Thailand) with letters from the company to the King. In May 1648 he was in charge of an expedition sent to Manila to try to intercept and loot the Spanish silver ships coming from America, but he had no success and returned to Batavia in January 1649. In November 1649 he was charged and found guilty of having in the previous year hanged one of his men without trial, was suspended from his office of commander, fined, and made to pay compensation to the relatives of the sailor. On January 5, 1651, he was formally reinstated in his rank and spent his remaining years at Batavia. He was in good circumstances, being one of the larger landowners in the town. He died at Batavia in October 1659 and was survived by his second wife and a daughter by his first wife. His discoveries were most important but led to nothing for more than 100 years. 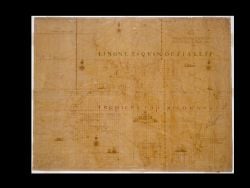 The Abel Tasman map, 1644, also known as the Bonaparte Tasman map. This map is part of the collection of the State Library of New South Wales, Australia. 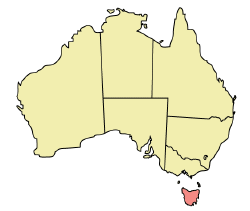 The Australia state of Tasmania

As with many explorers, Tasman's name has been honored in many ways. These include:

The island of Tasmania was settled by the British in 1803, to preclude French occupation. Van Diemem's Land became a colony in 1825, and an Australia State in January, 1901. Disease, war, persecution and the settlers total disregard of anything of value in the culture of the indigenous people resulted in the decimation and eventual demise of the Tasmanian Aborigines. Abel Tasman bears no responsibility for this act of genocide even though his voyages helped to open up the South Pacific to European colonization. The colonial process was historically inevitable. As the Enlightenment placed humanity at the center of the universe, people wanted to explore and to dominate the natural world, to use its resources in order to enrich human life. The thirst for knowledge also motivated exploration, as botanical and mineral as well as cultural specimens, samples and artifacts were collected for study at the metropolitan museums and universities. To fuel the Industrial revolution that accompanied this flowering of science and technology, raw materials were needed as were new partners in commerce and trade. The great imperial expansion of this period was intimately linked with developments in learning, science and with industrial growth. It happened that the European powers were ascendant at this point in history. Colonial settlement was a by-product that had both negative and positive consequences, from the perspective of a value-based view of history. On the one hand, it saw the exploitation of people and even the destruction of their cultures. On the other hand, it joined the world together, making it possible for humanity to develop a new consciousness of the inter-connectedness and sanctity of all life, of shared responsibilities to steward, protect and preserve the planet, to transform it into a peaceful, sustainable habitat.