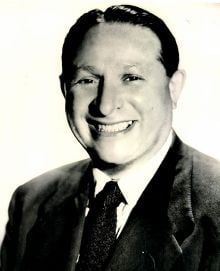 Abraham M. Saperstein (July 4, 1902 – March 15, 1966) was the founder and coach of the world-famous Harlem Globetrotters. In an era where basketball hadn’t yet found its niche, Saperstein played the role of Phineas T. Barnum and promoted the nuances of the sport worldwide. During the latter stages of his life he was also credited with the invention of the three point shot, which has made the modern game of basketball more fast paced and exciting. Basketball would not be where it is today without his lifelong dedication and contribution to the sport.

Saperstein is also an unsung hero in the area of civil rights. He provided opportunities for African-American players that were excluded by professional leagues and in so doing he opened the door for them to the NBA. The team he founded has since become Goodwill Ambassadors that travel all over the world. He was inducted into the Basketball Hall of Fame in 1971.

Abe Saperstein was born in London, England, but left for Chicago, Illinois at the age of six. Though he was only five feet tall, Saperstein competed in baseball, basketball, and track as a high school student, but wasn't even given a tryout for the basketball team at the University of Illinois. From 1920 to 1925, he played guard for the semi-professional Chicago Reds. While much of Saperstein’s youth was ordinary, he first arrived on the horizon of basketball history in 1928 as a coach of the Savoy Big Five, named after Chicago’s famous Savoy Ballroom. After a short lived stint as a professional baseball and basketball player, Saperstein found his role as coach and promoter. 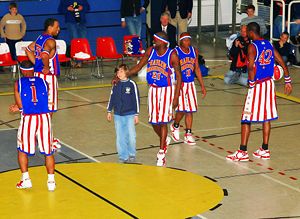 The Harlem Globetrotters were famous for playing tricks on spectators during their games.

The Harlem Globetrotters evolved from a series of different teams, beginning with the Giles Post of the Negro American Legion League. The Giles Post was founded at Wendell Phillips High School in 1926. Soon thereafter the 24 year old Abe Saperstein took over the team and renamed it the Savoy Big Five in return for sponsorship of his team. At the time, the Savoy Ballroom had just opened and partnered with Saperstein in an attempt to draw an audience to dance after their shows. In its early stages, the Savoy Big Five consisted entirely of African-Americans and was deemed to be a failure by all. The team consisted of William Grant, Lester Johnson, Tommy Brookings, Inman Jackson, Joe Lillard, Walter Wright, Randolph Ramsey, and William Watson. One year later, he formed the Saperstein's Harlem, New York, Globetrotters, which later became simply the Harlem Globetrotters.

The Globetrotters sported a 101-6 record the first year, 145-13 in 1928, and 151-13 in 1929. Finding difficulty locating willing opponents, Saperstein conceived the idea of fancy, comedic, razzle-dazzle type of play, and soon the team became a must-see attraction on the professional basketball barnstorming circuit.[1] Not only did Saperstein manage the team, he acted as their chauffeur, trainer, and only substitute player in order to manage finances when profits were bleak. Even with all their clowning the Globetrotters still won the World Basketball Championship in 1940, giving substance to Saperstein's long-ignored claim that given the opportunity, they were among basketball's best. In 1943-44, the Trotters captured basketball’s International Cup.[1]

Saperstein was also Tom Hayes’ partner in the Black Barons baseball team in Birmingham, Alabama. Hayes owned the Negro League team but stayed in the background while Abe ran the club. He was extensively involved in black baseball, being a booking agent for several barnstorming teams besides running the Black Barons. He is remembered as someone who earned the respect of his players by paying them on time and in full (not always the case in the Negro Leagues).

The Game that Changed the Game

Until the end of the 1940s basketball upheld racial barriers and did not allow blacks to mix with whites. At that time the majority of basketball fans, including the players of the NBL, did not think that blacks had the talent to play basketball. The Harlem Globetrotters were perceived as entertainers and not athletes.

That perception changed after a game featuring the National Basketball League’s best team, the Minneapolis Lakers and Saperstein’s Harlem Globetrotters. The game was the brainchild of Saperstein and Max Winter, an owner of the Lakers.[2] Saperstein's team had vastly improved over the years. By the late 1940s, the Globetrotters were taking on and beating anyone who would play them: YMCA teams, industrial league squads and a team from the NBL, the NBA's precursor. The crowds were getting bigger and by 1948 Saperstein was boasting that his team had won more than 100 straight games.[2]

The game was played in the shadow of deep racial divides in Chicago. The Globetrotters were popular but they stayed in a black only rooming house when they came to town.[2] On February 19, 1948, George Mikan, the legendary Lakers center and Globetrotters’ Reece "Goose" Tatum took center court for a jump ball. Just the year before, in 1947, Jackie Robinson had broken the color barrier for baseball, and this game was instrumental in doing the same for basketball. The game was a thriller as Ermer Robinson sank a 30-foot shot with the clock running out.

The Globetrotters' 61-59 win was big news in Chicago and made big headlines in both the black and white newspapers. But while the black Chicago Defender trumpeted the victory in its headline, not all the white papers did. Some headlines obscured the final results. Mikan, Trotters Thrill 17,823 read the Chicago Daily News. And the Daily Sun and Times focused on the individual scoring battle with a headline that read: Mikan Cooks Tatum's Goose.[2]

The Globetrotters had not only shown they could play with white teams, they'd also shown that fans, white and black, would watch them. At a time when white teams were drawing small crowds and losing money, it wasn't lost on the owners that the crowd was the largest ever to see a professional game in Chicago. As a result, two years later (1950), the NBA drafted the first African-American player, Chuck Cooper.[2]

The demand for the Globetrotters was so great in the 1950s, that the team fielded three separate units in the United States, and an all star international squad. Since 1954, the Globetrotters have made numerous television appearances and have starred in their own cartoon series (1970-1973), and a variety show (1974).

Birth of the ABL

The second coming of the American Basketball League (ABL), was the brainchild of a disappointed Abe Saperstein. Saperstein was denied an NBA franchise in Los Angeles, as he believed he'd been promised after helping prop up the league, and owner Bob Short instead moved the Lakers from Minneapolis.

After Saperstein had spent years supporting the struggling NBA with doubleheader games featuring his Harlem Globetrotters he was convinced that professional basketball was ready for something new. Saperstein went out of his way to place ABL teams in Los Angeles to rival the Lakers. He convinced the National Alliance of Basketball Leagues team owner Tuck Tapers and Amateur Athletic Union owner George Steinbrenner to take their top teams and form a league to rival the NBA.

His key contribution is the acceptance of African-American players.

He traveled around the world as the owner and coach of the Harlem Globetrotters until his death in 1966. He was buried in the Westlawn Cemetery in Chicago, Illinois.

In the short-lived ABL, he gave birth to the three point shot that is a fan favorite in today's NBA.

In 1988 the documentary film Harlem Globetrotters: 6 Decades of Magic was released. In 2005 The Team That Changed the World was released with newsreel footage and recent interviews and testimonials tracking the years of struggle as the Globetrotters went from touring entertainment to serious competitors.[4]

The Harlem Globetrotters have become an international phenomenon having traveled through more than 115 countries and five continents and played before more than 120 million fans. They have appeared on television, and in motion pictures.[1] The team is still known as America’s Number One Goodwill Ambassadors.[1]

In 2002 the team he founded was inducted into the Basketball Hall of Fame. The Harlem Globetrotters have scored over 20,000 victories with less than 400 losses. They surpass every other team in the history of sports for number of games played.[5]

Retrieved from https://www.newworldencyclopedia.org/p/index.php?title=Abe_Saperstein&oldid=1051484
Categories:
Hidden category:
This page was last edited on 8 April 2021, at 16:20.
Content is available under Creative Commons Attribution/Share-Alike License; additional terms may apply. See Terms of Use for details.