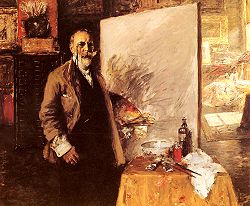 Self Portrait (1915) from the collection of the Richmond Art Museum, Richmond, Indiana.

William Merritt Chase (November 1, 1849 – October 25, 1916) was an American painter. Although known primarily as a realist, he was also an early proponent of Impressionism in America; his freely brushed canvases were reminiscent of both Édouard Manet and John Singer Sargent.

Chase is perhaps best remembered as one of the pre-eminent art teachers at the turn of the twentieth century, one who had a marked influence on young painters such as Georgia O'Keeffe.

Proficient in many media, Chase is best known for his portraits and still lifes in oil. Chase is considered one of America's most gifted portrait painters at the end of a traditional era in art that gave way to the new forms of Modernism.

He was born in Williamsburg (now Nineveh), Indiana, the eldest of seven children of David Hester Chase and Sarah Swaim Chase. Chase's father moved the family to Indianapolis, Indiana in 1861 and employed his son as a clerk in the family business. Chase showed an early interest in art, copying profiles of family and friends. After a brief stint in the United States Navy he studied under portrait painter Barton S. Hays.

Chase's teachers urged him to travel to New York to further his artistic training. He arrived in New York in 1869, met and studied with Joseph Oriel Eaton for a short time, then enrolled in the National Academy of Design under Lemuel Wilmarth, a student of the famous French artist Jean-Léon Gérôme. He set up his own studio in the Y.M.C.A. Building at Fourth Avenue and Twenty-third Street painting still-life studies. One of these, Catawba Grapes, was exhibited at the National Academy in 1871.

In 1870 declining family fortunes forced Chase to leave New York for St. Louis, Missouri. While he worked to help support his family he became active in the St. Louis art community, winning prizes for his paintings at a local exhibition. Chase's talent elicited the interest of wealthy St. Louis collectors who arranged for him to visit Europe for two years, in exchange for Chase's help in securing European art for their collections.

In Europe Chase studied at the Academy of Fine Arts, Munich, a long-standing center of art training that was attracting increasing numbers of Americans. He studied under Alexander Von Wagner and Karl von Piloty, who encouraged study of the Old Masters, such as Frans Hals and Diego Velázquez. While there Chase befriended American artists Walter Shirlaw and Frank Duveneck. In Munich, Chase applied his newly emerging talent to figurative works that he painted in the loosely-brushed style popular with his instructors. One of these, a portrait titled Keying Up – The Court Jester (now in the collection of the Pennsylvania Academy of the Fine Arts) won a medal at the Philadelphia Centennial Exposition in 1876 and gained Chase immediate recognition. 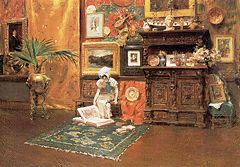 Chase traveled to Venice, Italy in 1877 with Duveneck and John Henry Twachtman before returning to the United States in the summer of 1878. His return signaled a new wave of European-educated American talent in the field of art. Home in America, he exhibited his painting Ready for the Ride (now in the collection of the Union League Club) with the newly-formed Society of American Artists in 1878.

He also opened a studio in New York in the Tenth Street Studio Building, which soon became a gathering place to many of the important painters of the day. Chase was a member of the Tilers, a group of artists and authors, among whom were notable artists such as Winslow Homer, Arthur Quartley, and Augustus Saint Gaudens.

In New York City, Chase was known for a flamboyance that he flaunted in his dress, his manners, and most of all in his studio. At Tenth Street, Chase filled the studio with lavish furniture, decorative objects, stuffed birds, oriental carpets, and exotic musical instruments. By 1895 the cost of maintaining the studio, in addition to his other residences, forced Chase to close it and auction the contents. His house on Stuyvesant Square remained his residence for life. He also maintained a studio in the Tiffany Building on Fourth Avenue.[1] 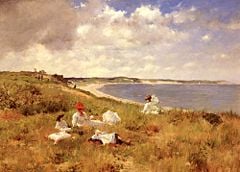 In addition to his painting, Chase actively developed an interest in teaching. He opened the Shinnecock Hills Summer School on Eastern Long Island, New York in 1891 and taught there until 1902. Chase adopted the plein air method of painting, and often taught his students landscape painting in outdoor classes.

Beyond his instruction of East Coast artists, he had an important role in influencing California art at the turn of the century, especially in his interactions with Arthur Frank Mathews, Xavier Martinez and Percy Gray.

As a teacher, Chase encouraged his pupils to work directly from nature. He stressed technique as primary over subject-matter and advocated drawing from a fully loaded brush, eschewing preliminary sketches. All of his students, including Charles Demuth, Marsden Hartley, Georgia O'Keeffe, Charles Sheeler and Joseph Stella, developed very diverse, individual styles.[2] 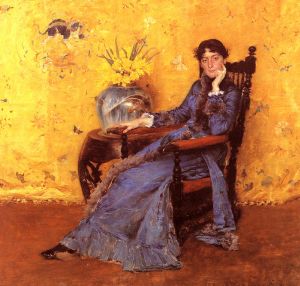 Chase went on to become one of the leading American portrait painters of his generation; his sitters included some of the most important men and women of his time in addition to his own family. Chase often painted his wife Alice and their children, sometimes in individual portraits, and at other times in scenes of domestic tranquility such as at breakfast in their backyard, or relaxing at their summer home on Long Island with the children playing on the floor.

In 1881 he made the first of many trips to Europe, which brought him into contact with the Belgian painter Alfred Stevens and the work of the French Impressionists. Their influence can be seen in his works of lighter palette such as in the portrait of Miss Dora Wheeler (1883) and in Sunlight and Shadow (1884).[2]

In 1885 he painted the portrait of James McNeil Whistler which now hangs at the Metropolitan Museum of Art in New York. One art critic has described A Friendly Call, showing Mrs. Chase receiving a beautifully gowned visitor, "his most brilliantly conceived composition of figures in an interior."[3]

In addition to painting portraits and full-length figurative works, Chase began painting landscapes in earnest in the late 1880s. He proved to be accomplished in other media as well. Although, he was most fluent in oil painting and pastel, he also created watercolor paintings and etchings. His interest in landscape art may have been spawned by the landmark New York exhibit of French impressionist works from Parisian dealer Paul Durand-Ruel in 1886. Chase is best remembered for two series of landscape subjects, both painted in an impressionist manner. The first was his scenes of Prospect Park, Brooklyn and Central Park in New York City.

The second series for which he is well known were his summer landscapes at Shinnecock. Chase usually featured people prominently in his landscapes. Often he depicted women and children in leisurely poses, relaxing on a park bench, on the beach, or laying in the summer grass at Shinnecock. Chase's Shinnecock art works have come to be regarded by art historians as particularly fine examples of American Impressionism.

Chase continued to paint still lifes as he had done since his student days. Decorative objects filled his studios and homes, and his interior figurative scenes frequently included still life images. Chase's most well regarded still life subjects were of dead fish, which he liked to paint against dark backgrounds, limp on a plate as though fresh from a fishmonger's stall.

Through his influence the brightly colored pallete of the Impressionists along with the broad brush strokes of John Singer Sargent became a part of the vernacular of American painting.

Chase won many honors at home and abroad, was a member of the National Academy of Design, New York, and from 1885 to 1895 was president of the Society of American Artists. He became a member of the Ten American Painters after John Henry Twachtman died.

Chase strongly resisted some of the new interpretations of art that were being explored by some of his own students such as Edward Hopper and Josephine Nivinson (later Hopper's wife). His relationship with Robert Henri, a popular teacher at Chase's School of Art developed into a rivalry over the interpretation of art as students sought more modern interpretations aligned with the growing reality of urban America and their desire to paint what was not idealized but true to life.

Chase's creativity declined in his later years, especially as modern art took hold in America, but he continued to paint and teach into the 1910s. One of his last teaching positions was at Carmel, California in the summer of 1914. Chase died on October 25, 1916, in his New York townhouse, an esteemed elder of the American art world. Today his works are in most major museums in the United States including the Metropolitan Museum of Art.

A DVD titled William Merritt Chase at Shinnecock was produced in 1987 by the National Gallery of Art. Images of Chase's paintings and archival photographs—many of the artist's studios—are combined with footage of the hills and beaches at Shinnecock and of Chase's house and studio.

Retrieved from https://www.newworldencyclopedia.org/p/index.php?title=William_Merritt_Chase&oldid=1043378
Categories:
Hidden category:
This page was last edited on 4 October 2020, at 18:18.
Content is available under Creative Commons Attribution/Share-Alike License; additional terms may apply. See Terms of Use for details.