A still life is a work of art depicting inanimate subject matter, typically commonplace objects which may be either natural (flowers, game, sea shells, and the like) or man-made (drinking glasses, foodstuffs, pipes, books, and so on). Popular in Western art since the seventeenth century, still life paintings give the artist added flexibility in the arrangement of design elements within a composition than do paintings of other types of subjects such as landscape or portraiture.

Traditionally, some of the objects in a still life were likely to have been selected for their symbolic meaning, but this symbolism eludes most modern-day visitors. Cut flowers or a piece of decaying fruit, for instance, symbolize mortality. However a still life painting does not have to have symbolism.

Still-life paintings were found on the walls of ancient Egyptian tombs, as they were in Roman frescoes. Though not a main genre, still-life painting has been part of China's art history as well. In Korea during the mid-Chosun period, still-life subjects included The Four Gracious Plants. In Japan, the greatest epoch for still-life painting depicted exquisite images of flowers, birds, and insects.

Through the Middle Ages and the Renaissance, the Western still-life genre was secondary to Christian religious subjects. Sumptuous arrangements of fruit and flowers or skulls and burning candles were the subject matter of seventeenth-century still lifes. The eighteenth-century French aristocracy employed artists to paint extravagant still-life subjects. Nineteenth-century Impressionist and Post-Impressionist painters emphasized technique and design over subject matter in their still lifes, with Vincent van Gogh's "Sunflowers" being a prime example. Paul Cezanne is perhaps the most famous painter of apples simply for the colors, shapes, and perspective possibilities. In the early twentieth century, Cubist artists like Pablo Picasso and Georges Braque created still-life compositions, often including musical instruments. More recent still-life trends, included Pop Art, such as Andy Warhol's "Campbell's Soup Cans;" Photorealism; and images with cultural and political messages.

Still-life paintings adorned the walls of ancient Egyptian tombs. It was believed that the foodstuffs and other items depicted there would, in the afterlife, become real and available for use by the deceased. Similar paintings, more simply decorative in intent, have also been found in the Roman frescoes unearthed at Pompeii and Herculaneum.

Through the Middle Ages and the Renaissance, still life in Western art was mainly used as an adjunct to Christian religious subjects. This was particularly true in the work of Northern European artists, whose fascination with highly detailed optical realism and disguised symbolism led them to lavish great attention on the meanings of various props and settings within their paintings' overall message. Painters such as Jan van Eyck often used still life elements as part of an iconographic program.

In Korea during the mid-Chosun period (1392-1910), many painters traveled the countryside in search of beautiful scenery to paint. From this effort developed still-life subjects known as The Four Gracious Plants, alternately called the Four Gentlemanly Plants, consisting of plum blossoms, orchids or wild orchids, chrysanthemums, and bamboo. Originally Confucian symbols for the four qualities of a learned man, they are now more commonly associated with the four seasons. 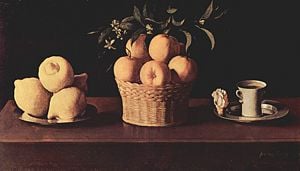 Still life came into its own in the new artistic climate of the Netherlands in the seventeenth century. While artists found limited opportunity to produce the religious art which had long been their staple—images of religious subjects were forbidden in the Dutch Reformed Protestant Church—the continuing Northern tradition of detailed realism and hidden symbols appealed to the growing Dutch middle classes, who were replacing Church and State as the principal patrons of art in the Netherlands. 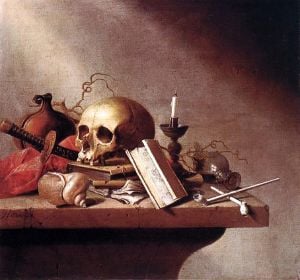 Especially popular in this period were vanitas paintings, in which sumptuous arrangements of fruit and flowers, or lavish banquet tables with fine silver and crystal, were accompanied by symbolic reminders of life's impermanence. A skull, an hourglass or pocket watch, a candle burning down or a book with pages turning, would serve as a moralizing message on the ephemeral nature of sensory pleasures. Often some of the luscious fruits and flowers themselves would be shown starting to spoil or fade. The popularity of vanitas paintings, and of still life generally, soon spread from Holland to Flanders, Spain, and France.

In Japan, the greatest epoch for still-life painting began in the seventeenth century and lasted through the eighteenth. A popular school of artists seeking inspiration from contemporary life (especially subjects like flowers, birds, and insects) utilized a wide range of colored inks on some of the most sympathetic paper ever produced. At the time, there was an eclectic and limited public made of connoisseurs who sought out the exotic images.

The French aristocracy of the eighteenth century also employed artists to execute paintings of bounteous and extravagant still life subjects, this time without the moralistic vanitas message of their Dutch predecessors. The Rococo love of artifice led to a rise in appreciation for trompe l'oeil (French: "trick the eye") painting, a type of still life in which objects are shown life-sized, against a flat background, in an attempt to create the illusion of real three-dimensional objects in the viewer's space. 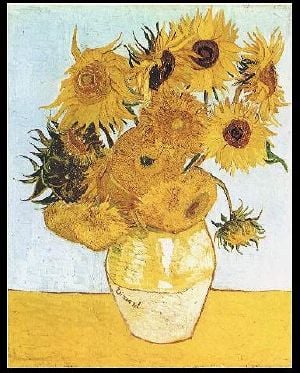 With the rise of the European Academies, most notably the Académie française which held a central role in Academic art, and their formalized approach to artistic training, still life began to fall from favor. The Academies taught the doctrine of "Hierarchy of genres" (or "Hierarchy of Subject Matter"), which held that a painting's artistic merit was based primarily on its subject. In the Academic system, the highest form of painting consisted of images of historical, Biblical or mythological significance, with still life subjects relegated to the very lowest order of artistic recognition. 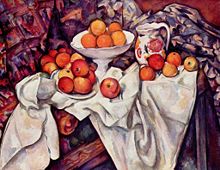 It was not until the decline of the Academic hierarchy in Europe, and the rise of the Impressionist and Post-Impressionist painters, who emphasized technique and design over subject matter, that still life was once again avidly practiced by artists. Henri Fantin-Latour is known almost exclusively for his still lifes. Vincent van Gogh's "Sunflowers" is one of the best known nineteenth century still-life paintings, and Paul Cézanne found in still life the perfect vehicle for his revolutionary explorations in geometric spatial organization.

Indeed, Cézanne's experiments can be seen as leading directly to the development of Cubist still life in the early twentieth century. Between 1910 and 1920, Cubist artists like Pablo Picasso, Georges Braque, and Juan Gris painted many still life compositions, often including musical instruments, as well as creating the first Synthetic Cubist collage works, such as Picasso's "Still Life with Chair Caning" (1912).

Artists in the United States, largely unburdened by Academic strictures on subject matter, had long found a ready market for still-life painting. Raphaelle Peale (1774-1825), eldest son of Revolutionary era painter Charles Willson Peale, was the first American still-life specialist, and established a tradition of still-life painting in Philadelphia that continued until the early twentieth century, when artists such as William Harnett and John Frederick Peto gained fame for their trompe l'oeil renderings of collections of worn objects and scraps of paper, typically shown hanging on a wall or door.

When twentieth-century American artists became aware of European Modernism, they began to interpret still-life subjects with a combination of American Realism and Cubist-derived abstraction. Typical of the American still-life works of this period are the paintings of Georgia O'Keeffe, Stuart Davis, and Marsden Hartley, and the photographs of Edward Weston. 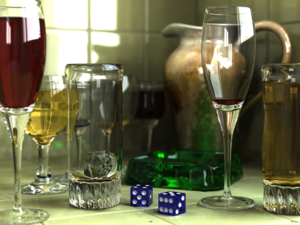 Much Pop Art (such as Andy Warhol's "Campbell's Soup Cans") is based on still life, but its true subject is most often the commodified image of the commercial product represented rather than the physical still life object itself. The rise of Photorealism in the 1970s reasserted illusionistic representation, while retaining some of Pop's message of the fusion of object, image, and commercial product. Typical in this regard are the paintings of Don Eddy and Ralph Goings. The works of Audrey Flack add to this mix an autobiographical Feminist message relating to cultural standards of female beauty. While they address contemporary themes, Flack's paintings often include trompe l'oeil (art technique involving extremely realistic imagery in order to create the optical illusion that the depicted objects really exist) as well as elements of vanitas (symbolic style, including skulls and decaying fruit, meant as a reminder of the transience of life, the futility of pleasure, and the certainty of death), thereby referencing the entire still life tradition.

Retrieved from https://www.newworldencyclopedia.org/p/index.php?title=Still_Life&oldid=1083193
Categories:
Hidden category:
This page was last edited on 21 October 2022, at 18:01.
Content is available under Creative Commons Attribution/Share-Alike License; additional terms may apply. See Terms of Use for details.