Winslow Homer (February 24, 1836 – September 29, 1910) was an American landscape painter and printmaker. Largely self-taught, he excelled equally in the arts of illustration, oil painting, and watercolor. The broad range of his work encompasses the many places he visited as an artist, from Civil War battlefields to northern England's desolate coast, to the tropical locale of the Caribbean.

Although he is often remembered for his pictures of bucolic scenes from nineteenth century American farm life, his later work depicts humanity's often heroic struggle with the forces of nature, particularly the sea. A versatile artist who displayed a wide range of subjects, styles, and mediums, he is considered a preeminent figure in American art. 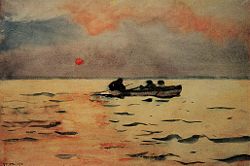 Winslow Homer was born in Boston, Massachusetts, the second of three sons of Henrietta Benson, an amateur watercolorist, and Charles Savage Homer, a hardware importer. At the age of 19, he was apprenticed to a commercial lithographer for two years before becoming a freelance illustrator in 1857. Soon he was a major contributor to such popular magazines as Harper’s Weekly. In 1859, he moved to New York to be closer to the publishers that commissioned his illustrations.

His early works, mostly commercial engravings, are characterized by clean outlines, simplified forms, dramatic contrast of light and dark, and lively figure groupings—qualities that remained important throughout his career.

From 1861 to 1865, Homer went to the front lines of the American Civil War, where he sketched battle scenes for Harper's. His illustration of soldiers entertaining themselves and other incidents of camp life were hugely popular. Later, Homer was to abandon illustration completely; however, his work for books and magazines mark him as an important contributor to both children's literature and Civil War journalism.[1]

After the war, Homer set to work on a series of war-related paintings, among them Sharpshooter on Picket Duty, and Prisoners from the Front, which is noted for its objectivity and realism. The latter painting is now a part of the permanent collection of the Metropolitan Museum of Art, New York.[2]

After exhibiting at the National Academy of Design, Homer traveled to Paris, France, in 1867, where he remained for a year. He practiced landscape painting while continuing to work for Harper's. Though his interest in depicting natural light and his bold use of color parallels that of the impressionists, there is no evidence of direct influence.

Homer began to gain acclaim as a painter in the late 1870s and early 1880s, during which time he painted mostly rural or idyllic scenes of farm life, children playing, and young adults courting. One of the most notable paintings from that era was the 1872 composition, Snap-the-Whip, which was exhibited at the 1876 Centennial Exposition in Philadelphia, Pennsylvania.

Homer's straightforward sensibility also yielded the most unaffected views of African-American life up until that time. Several pictures of negro life in Virginia were painted in the late 1870s, notably the "Visit from the Old Mistress," which is now in the National Gallery of Art, Washington.[3] 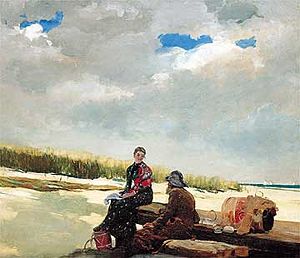 In 1875, Homer quit working as a commercial illustrator. He traveled widely, spending two years (1881–1882) in the English coastal village of Cullercoats, Northumberland, where he rekindled his boyhood interest in the sea, and painted the local fishermen.

Many of the paintings at Cullercoats also took as their subjects young women mending nets or looking out to sea; they were imbued with a solidity, sobriety, and earthy heroism which was new to Homer's art, and they presage the direction of his future work. 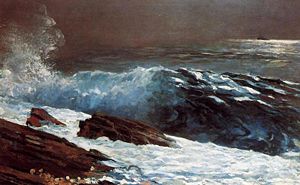 Sunlight on the Coast. 1890. Toledo Museum of Art.

Homer's most memorable work was not undertaken until after the age of forty-five when he returned to the United States and settled in Prout's Neck, Maine. He then began to focus on the watercolors seascapes that would come to define his oevre.

There, observing the local fishermen, he became preoccupied with humanity's struggle against the forces of nature, particularly the sea. These later paintings depict the daring deeds of the coast guard, shipwrecks, and storms at sea in a manner which combines dramatic power with intimate design. Among this series of compositions are: Watching the Tempest, Perils of the Sea, The Life Brigade, and The Ship's Boat.

During this era, he also painted the dramatic struggle with nature, images for which he is perhaps best known including: Banks Fisherman, Eight Bells, The Gulf Stream, Rum Cay, Mending the Nets, and Searchlight, Harbor Entrance, Santiago de Cuba.

In the winter, Homer ventured to warmer locations in Florida, Cuba, and the Bahamas. Additionally he found inspiration in a number of summer trips to the North Woods Club, near the hamlet of Minerva, New York, in the Adirondack Mountains.

Homer died at the age of 74, in his Prout's Neck studio and was interred in the Mount Auburn Cemetery in Cambridge, Massachusetts. His painting, Shoot the Rapids, remains unfinished. 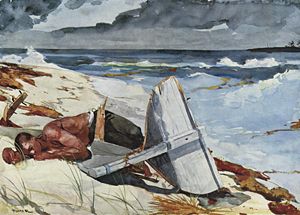 After the Hurricane. 1899. Art Institute of Chicago.

Homer was once described as the "painter of national identity" for his Civil War and genre scenes, but he will probably be best remembered for his works that capture the beauty and the mystery of the sea.[4]

His pictorial description of each of the places that he visited, including the early seascapes of the East Coast and the vibrant tropical watercolors of the Bahamas, highlights their uniqueness. Direct observation was important to Homer; he once remarked, that "he painted only what he saw." [5]

Homer's works strongly influenced succeeding generations of American painters with their direct and energetic interpretation of man's stoic relationship to nature that was often neutral yet at other times harsh and unrelenting.

One biographer has called Homer the greatest pictorial poet of outdoor life in nineteenth century America. "In his energy, his wide range, the pristine freshness of his vision, and his simple sensuous vitality, he expressed certain aspects of the American spirit as no preceding artist had."

During his lifetime Winslow Homer was a member of the The Tile Club, a group of artists and writers who met frequently to exchange ideas. Other well known members of the group were painters William Merritt Chase, Arthur Quartley, and the sculptor Augustus Saint Gaudens.

Microsoft Chairman Bill Gates paid a record $30 million in 1998, for Lost on the Grand Banks, the last major seascape by Homer that was still in private hands. Gates paid nearly three times the record for an American painting that was set in 1996, when Cashmere, by John Singer Sargent sold for $11.1 million at Sotheby's auction house.[6]

Retrieved from https://www.newworldencyclopedia.org/p/index.php?title=Winslow_Homer&oldid=1043660
Categories:
Hidden category:
This page was last edited on 10 October 2020, at 16:02.
Content is available under Creative Commons Attribution/Share-Alike License; additional terms may apply. See Terms of Use for details.