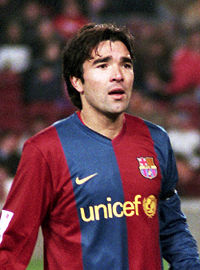 Deco, a footballer with the Soccer club of Barcelona wearing the shirt with the Unicef logo, during the Barcelona-Atlético de Madrid soccer match in December 2006.

The United Nations Children's Fund (or UNICEF) was created by the UN General Assembly on December 11, 1946. In 1953, its name was shortened from United Nations International Children's Emergency Fund, but is still known by the popular acronym based on this old name. Headquartered in New York City, UNICEF provides long-term humanitarian and developmental assistance to children and mothers in developing countries.

The organization's programs emphasize developing community level services to promote the health and well being of children. UNICEF was awarded the Nobel Peace Prize in 1965, and Prince of Asturias Award of Concord in 2006. 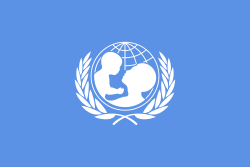 UNICEF focuses mainly in the poorer regions of Africa, although it has done charity work all over the world.

UNICEF works to improve the status of their priorities through methods ranging from direct and legal interventions to education, research, and census data collection.

Education is a proven intervention for improving the lives of all people, including children. Educating young women yields spectacular benefits for the current and future generations, and specifically affects a range of UNICEF priorities including child survival, children in family, immunization, and child protection.

UNICEF’s aim is to get more girls into school, ensure that they stay in school and that they are equipped with the basic tools they need to succeed in later life. As part of its ongoing efforts to ensure every girl and boy their right to an education, UNICEF’s acceleration strategy has sped progress in girls’ enrollment in 25 selected countries during the 2002–2005 period.[1]

Immunization is a direct intervention method which has made great improvements in the health of children worldwide over the past 20 years. But every year, more than 2 million children die from diseases that could have been prevented by inexpensive vaccines.

The positive in the program is the additional interventions made possible during immunization efforts. Ranging from client education to nutritional supplements to insecticide treated mosquito netting, these life-saving services make immunization programs an even more powerful tool for child health.[2]

UNICEF uses the term "child protection" to refer to preventing and responding to violence, exploitation, and abuse against children—including commercial prostitution, sexual exploitation, trafficking, child labor, and harmful traditional practices, such as female circumcision/cutting and child marriage. UNICEF’s child protection programs also target children who are uniquely vulnerable to these abuses, such as when living without parental care, in conflict with the law, and in armed conflict. Violations of the child’s right to protection take place in every country and are massive, under recognized and under reported barriers to child survival and development, in addition to being human rights violations. Children subjected to violence, exploitation, abuse, and neglect are at risk of death, poor physical and mental health, HIV/AIDS infection, educational problems, displacement, homelessness, vagrancy, and poor parenting skills later in life.[3]

Among many other programs, UNICEF supports the International Child Rights Information Network. In 2007, UNICEF published An Overview of Child Well-being in Rich Countries, which showed the UK and the U.S. at the bottom of a league of 21 economically advanced nations when it comes to overall child well-being.

15 million children are now orphaned due to AIDS. It is estimated that by the year 2010, in sub-Saharan Africa alone, more than 18 million children will have lost at least one parent to AIDS. Half of all new HIV/AIDS infections are people under the age of 25, with girls being hit harder and younger than boys. Working to protect and support orphaned children, to prevent parent-child transmission and to give young people gender sensitive, youth friendly services, UNICEF also advocates for a protective familial, social and legal environment. UNICEF is also running several programs dedicated to controlling both online and offline child pornography.[4]

Structure of the organization

The heart of UNICEF's work is in the field, with staff in over 150 countries and territories. More than 120 country offices carry out UNICEF's mission through a unique program of cooperation developed with host governments. Seven regional offices guide the work of the field offices and provide technical assistance as needed.

Overall management and administration of the organization takes place at its headquarters in New York. UNICEF's Supply Division is based in Copenhagen and serves as the primary point of distribution for essential items including lifesaving vaccines, antiretroviral medicines for children and mothers with HIV, nutritional supplements, emergency shelters, educational supplies, and more.

Many people in industrialized countries first hear about UNICEF’s work through the activities of 37 National Committees for UNICEF. These nongovernmental organizations are primarily responsible for fund raising, selling UNICEF greeting cards and products, creating private and public partnerships, advocating for children’s rights and providing other invaluable support. The U.S. Fund for UNICEF is the oldest of the National Committees, founded in 1947.

UNICEF is supported entirely by voluntary funds. Governments contribute two thirds of the organization's resources. Private groups and about six million individuals contribute the rest through the National Committees.

Guiding and monitoring all of UNICEF's work is a thirty six member Executive Board which establishes policies, approves programs, and oversees administrative and financial plans. The Executive Board is made up of government representatives who are elected by the United Nations Economic and Social Council, usually for three-year terms.

UNICEF Innocenti Research Centre in Florence, Italy, was established in 1988, to strengthen the research capability of the United Nations Children's Fund (UNICEF) and to support its advocacy for children worldwide.

The Center, formally known as the International Child Development Center, has as its prime objectives to improve international understanding of the issues relating to children's rights, to promote economic policies that advance the cause of children, and to help facilitate the full implementation of the United Nations Convention on the Rights of the Child in industrialized and developing countries.

The Program at the Research Center for 2006-2008 was approved by UNICEF Executive Board in September 2005. It reaffirms the Center's academic freedom and the focus of IRC's research on knowledge gaps, emerging questions and sensitive issues which are relevant to the realization of children's rights in both developing and industrialized countries.

The program plan capitalizes on the Research Center's role as an interface between UNICEF field experience, international experts, research networks and policy makers and is designed to strengthen the Centre's institutional collaboration with regional academic and policy institutions, pursuing the following four goals:

Three interrelated strategies will guide the achievement of these goals:

UNICEF is the world's leading children's organization. Over the 60 years of its history it has become a primary reference for governments and Non-Governmental Organizations (NGOs), collecting and disseminating more research on children than any other organization, writing position papers on various aspects of the health and environments of children. UNICEF has also organized worldwide fundraising drives to fund interventions which directly benefit children.

But many groups, governments, and individuals have criticized UNICEF over the years for failing to meet the needs of their particular group or interest. Recent examples include criticism of its perceived failure to hold the Government of Sudan adequately accountable for the practice of slavery in southern Sudan, its policy against the marketing of breast milk substitutes in developing world hospitals, and its adherence to the 1990 Convention on the Rights of the Child, which has been ratified by every member state in the United Nations, except for the United States (which is a signatory to the convention) and Somalia.

Unlike NGOs, UNICEF is an intergovernmental organization so is accountable to governments. This gives it unique reach and access in every country in the world, but also sometimes hampers its ability to speak out on rights violations.

UNICEF has also been criticized for having political bias. While UNICEF aims to fund only nonpolitical organizations, NGO Monitor (published by former Israeli Ambassador to the UN, Dore Gold) criticized the UNICEF funded "Palestinian Youth Association for Leadership and Rights Activation" (PYALARA), a student run Palestinian NGO, for what NGO Monitor alleges is its covert political agenda justifying suicide bombings and demonizing Israel.[6]

The Catholic Church has also been critical of UNICEF, with the Vatican even withdrawing donations, because of reports by the American Life League that parts of the funding pay for sterilizations, abortions, and contraceptives.[7]

In recent years UNICEF HQ in New York City has drastically decreased hiring full time employees, preferring instead to hire contractors. These contractors work full time without benefits, while UNICEF staff receive medical benefits, paid vacation, sick time, and access to assorted UN benefits such as a living stipend, an education stipend, paid travel, and full access to the UN Secretariat grounds. In order to get around fair labor laws, these consultants, many of whom in reality work full time, are required to take one month off unpaid for every eleven worked. This cycle is permitted for four years before the consultant must either incorporate and "hire her or himself" or discontinue their consultancy with UNICEF. Similar practices are found in the field. For actual staff, there are several class divisions. The "nationals," many of whom perform the same tasks as the "internationals," yet are paid drastically less and receive far fewer benefits. There is also a distinction between "General services" staff and "Professional" staff, which translates into a wide gap in salaries and benefits between the two groups.

On September 7, 2006, an agreement between UNICEF and the Catalan club FC Barcelona was reached whereby the club would donate 0.7 percent of its total yearly revenue to the organization for five years. As part of the agreement, FC Barcelona will wear the UNICEF logo on the front of their shirts. This is the first time the organization has had a sponsorship deal with a sports club. Despite popular misconception, this is not the first time in club history that the logo of another organization (except for the logos of the athletic manufacturers of the shirts) will be present on the Barcelona shirt, as in fact the logo of TV3 (Catalonia) has been on the sleeve of the team's kit for two years now.[8]

Since 1950, when a group of children in Philadelphia, Pennsylvania, donated $17 they got on Halloween to help post-World War II victims, the Trick-or-Treat for UNICEF box has become a tradition in North America during the haunting season. These small orange boxes are handed to children at schools and various other locations prior to October 31. To date, the box has collected approximately $91 million dollars (CAD) in Canada and over $132 million (U.S.) in the U.S.

Art in All of Us

Retrieved from https://www.newworldencyclopedia.org/p/index.php?title=United_Nations_Children%27s_Fund&oldid=1087114
Categories:
Hidden category:
This page was last edited on 12 November 2022, at 00:00.
Content is available under Creative Commons Attribution/Share-Alike License; additional terms may apply. See Terms of Use for details.