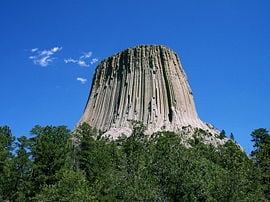 Devils Tower, the first national monument in the United States.

National monuments are managed by the National Park Service, USDA Forest Service, United States Fish and Wildlife Service, or by the Bureau of Land Management.

The power to grant national monuments comes from the Antiquities Act of 1906. President Theodore Roosevelt used the act to declare Devils Tower in Wyoming the first U.S. national monument. His action was prompted by his fear that Congress' pace was slow enough to allow ruination of the site before it could come under the protection of the national park system.

Unique and diverse national monuments, such as the natural Muir Woods National Monument of California or the cultural remains of the ancient Pueblo Peoples at Wupatki National Monument of Arizona, are sources of inspiration. The United States is replete with such treasures, and understands the value of passing such a legacy on to future generations. 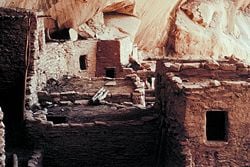 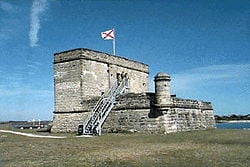 The Antiquities Act of 1906, officially An Act for the Preservation of American Antiquities (16 USC 431-433), is an act passed by the United States Congress and signed into law by President Theodore Roosevelt on June 8, 1906, giving the President of the United States authority to restrict the use of particular public land owned by the federal government by executive order, bypassing Congressional oversight.

The Antiquities Act resulted from concerns about protecting mostly prehistoric American Indian ruins and artifacts—collectively termed "antiquities"—on federal lands in the West, such as at Chaco Canyon, New Mexico. Removal of artifacts from these lands by private collectors—"pot hunters," in the language of the time—had become a serious problem by the end of the nineteenth century. In 1902, Iowa Congressman John F. Lacey, who chaired the House Committee on the Public Lands, traveled to the Southwest with the rising anthropologist Edgar Lee Hewett, to see for himself the extent of the pot hunters' impact. His findings, supported by an exhaustive report by Hewett to Congress detailing the archaeological resources of the region, provided the necessary impetus for the passage of the legislation.

The Act was intended to allow the President to set aside certain valuable public natural areas as park and conservation land ("National Monuments"). It also allows him to reserve or accept private lands for that purpose. The intention is to protect all historic and prehistoric sites on United States federal lands and to prohibit excavation or destruction of these antiquities. With this act, this can be done much more quickly than going though the Congressional process of creating a National Park. The Act states that areas of the monuments are to be confined to the smallest area compatible with the proper care and management of the objects to be protected.

Some areas designated as National Monuments have later been converted into National Parks, or incorporated into existing National Parks. Used over one hundred times since its passage, the Antiquities Act has often created significant controversy.

The original expectation was that national monuments would be proclaimed to protect prehistoric cultural features or antiquities and that they would be small. Yet, the reference in the act to "objects of … scientific interest" enabled President Theodore Roosevelt to make a natural geological feature, Devils Tower in Wyoming, the first national monument three months later. Among the next three monuments he proclaimed, in 1906, was Petrified Forest in Arizona, another natural feature which was later converted to a national park.

The expectation that national monuments would be small was also soon overcome. In 1908, Roosevelt again used the act to proclaim more than 800,000 acres (3,200 km²) of the Grand Canyon as a national monument—a very big "object of scientific interest." And in 1918, President Woodrow Wilson proclaimed Katmai National Monument in Alaska, comprising more than a million acres (4,000 km²). Katmai was later enlarged to nearly 2.8 million acres (11,000 km²) by subsequent Antiquities Act proclamations and for many years was the largest national park system unit. Petrified Forest, Grand Canyon, and Katmai were among the many national monuments later converted to national parks by Congress.

There was no significant Congressional opposition to this expansive use of the Antiquities Act in Arizona and Alaska—perhaps in part because Arizona and Alaska were then only territories without representation in Congress. Substantial opposition did not materialize until 1943, when President Franklin D. Roosevelt proclaimed Jackson Hole National Monument in Wyoming. He did this to accept a donation of lands acquired by John D. Rockefeller, Jr., for addition to Grand Teton National Park after Congress had declined to authorize this park expansion. Roosevelt's proclamation unleashed a storm of criticism about the use of the Antiquities Act to circumvent Congress. A bill abolishing Jackson Hole National Monument passed Congress but was vetoed by Roosevelt, and Congressional and court challenges to the proclamation authority were mounted. In 1950, Congress finally incorporated most of the monument into Grand Teton National Park, but the act of doing so barred further use of the proclamation authority in Wyoming. 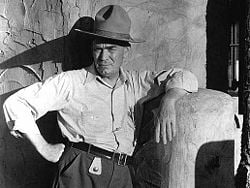 Since 1943, the proclamation authority has been used very sparingly, and seldom without advance Congressional consultation and support. In 1949, for example, President Harry S. Truman proclaimed Effigy Mounds National Monument to accept a donation of the land from the state of Iowa, at the request of Iowa's delegation. On those rare occasions when the proclamation authority was used in seeming defiance of local and congressional sentiment, Congress again retaliated. Just before he left office in 1961, President Dwight D. Eisenhower proclaimed the Chesapeake and Ohio Canal National Monument after Congress had declined to act on related national historical park legislation. The chairman of the House Interior Committee, Wayne Aspinall of Colorado, responded by blocking action on subsequent C&O Canal Park bills to the end of that decade.

The most substantial use of the proclamation authority came in 1978, when President Jimmy Carter proclaimed 15 new national monuments in Alaska. He did this after Congress had adjourned without passing a major Alaska lands-bill which was strongly opposed in that state. Congress passed a revised version of the bill in 1980, incorporating most of these national monuments into national parks and preserves, but the act also curtailed further use of the proclamation authority in Alaska.

Presidents have used the Antiquities Act's proclamation authority not only to create new national monuments but to enlarge existing ones. For example, Franklin D. Roosevelt significantly enlarged Dinosaur National Monument in 1938, Lyndon B. Johnson added Ellis Island to Statue of Liberty National Monument in 1965, and Jimmy Carter made major additions to Glacier Bay and Katmai National Monuments in 1978.

Note that National Monuments in multiple agencies appear under each agency and are noted. 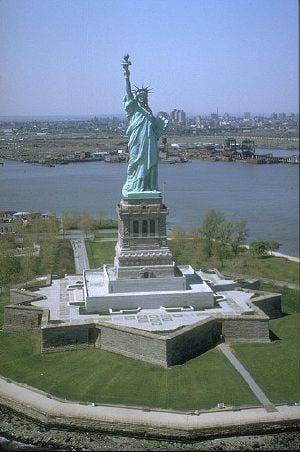 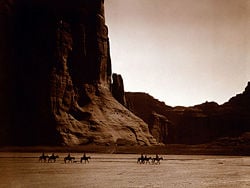 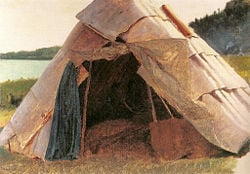 Retrieved from https://www.newworldencyclopedia.org/p/index.php?title=U.S._National_Monument&oldid=1086990
Categories:
Hidden category:
This page was last edited on 11 November 2022, at 16:14.
Content is available under Creative Commons Attribution/Share-Alike License; additional terms may apply. See Terms of Use for details.