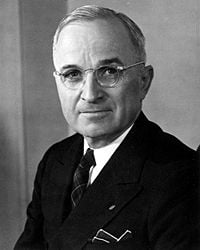 The Truman Doctrine was a proclamation by United States President Harry S. Truman on March 12, 1947. It stated that the U.S. would support Greece and Turkey with economic and military aid, to prevent their falling into the Soviet sphere. The Doctrine shifted American foreign policy in regard to the Soviet Union from détente to, as George F. Kennan phrased it, a policy of containment of Soviet expansion. Historians often use the announcement of the doctrine to mark the starting date of the Cold War.

Aid was agreed by the United States government to be given to both Greece and Turkey. It was an early response to a perceived political involvement of the Soviet Union in Europe and Asia, as suggested by the Communist activity in Turkey and Greece. It has been suggested that covert military support was also provided. Greece and Turkey remained on the NATO side throughout the entire Cold War. 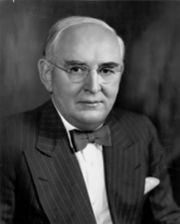 Aid was given by the United States to Greece and Turkey for both political and military reasons. The political reasons the United States gave aid to Turkey and Greece was because they were still holding off the Communist threat, and could still be saved from communism. The situation was very important for the west, "If Greece was lost, Turkey would become an untenable outpost in a sea of communism. Similarly, if Turkey yielded to Soviet demands, the position of Greece would be extremely endangered."[1]

It was a regional domino effect threat that guided the United States' decision. The military aspect of losing Greece and Turkey was also a huge factor in granting the 400 million dollars. The United States was fearful of a third World War at this time, and needed military advantages over the Soviet Union in the event of a conflict. Greece and Turkey turned out to be very important, "The failure of the West to prevent a communist takeover in Greece would not only put the Russians on a particularly dangerous flank for the Turks, but strengthen the Soviet Union’s ability to cut off allied supplies and assistance in the event of war."[2] Between both the political and military benefits of assisting Turkey and Greece, the United States felt compelled to pass the Truman Doctrine.

Harry S. Truman, supported by Senator Arthur H. Vandenberg and the Republican–controlled Congress, promulgated the policy after a visit from the Greek President. "At the urging of the United Kingdom, Prime Minister Tsaldaris of Greece visited Washington in December 1946, to plead for additional American assistance."[3] President Truman made the proclamation in an address to the U.S. Congress on March 12, 1947, amid the crisis of the Greek Civil War (1946-1949). Truman insisted that if Greece and Turkey did not receive the aid that they needed, they would inevitably fall to Communism with consequences throughout the region.

The Truman Doctrine was the first in a succession of containment moves by the United States, followed by economic restoration of Western Europe through the Marshall Plan and military containment by the creation of NATO in 1949. In Truman's words, it became "the policy of the United States to support free peoples who are resisting attempted subjugation by armed minorities or by outside pressures." Using a framing rhetoric that continues to have resonance today, Truman reasoned that because these "totalitarian regimes" coerced "free peoples," they represented a threat to international peace and the national security of the United States. 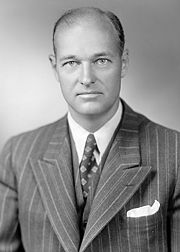 Truman signed the act into law on May 22, 1947. It granted $400 million ($300 million to Greece and $100 million to Turkey) in military and economic aid. The economic aid was to be used in repairing the infrastructure of these countries, and military aid came in the form of military personnel to supervise and help with the reconstruction of these countries while training soldiers. It should be noted that this American aid was in many ways a replacement for British aid, which the British were no longer financially able to give. The policy of containment and opposition to Communists, in Greece for example, was carried out by the British before 1947, in many of the same ways it was carried out afterward by the Americans.

The doctrine also had consequences elsewhere in Europe. Governments in Western Europe with powerful Communist movements, such as Italy and France, were given a variety of assistance and encouraged to keep Communist groups out of government. In some respects, these moves were in response to moves made by the Soviet Union to purge opposition groups in Eastern Europe out of existence.

In 1950, Truman signed the top-secret policy plan NSC-68, which shifted foreign policy from passive to active containment. The document differed from George F. Kennan's original notion of containment outlined in his "X" article, containing much harsher anti-Communist rhetoric. NSC-68 explicitly stated that the Communists planned for world domination. While this was likely an aim of Lenin, it may well have been abandoned by Stalin by 1950.

The Truman Doctrine can also be compared to the rationale for America's first involvements in the Vietnam War. Starting shortly after the outbreak of the Korean War, Truman attempted to aid France's bid to hold onto its Vietnamese colonies. The United States supplied French forces with equipment and military advisers in order to combat Ho Chi Minh and anti-imperialist and anti-colonial revolutionaries.

Retrieved from https://www.newworldencyclopedia.org/p/index.php?title=Truman_Doctrine&oldid=1034302
Categories:
Hidden category:
This page was last edited on 27 March 2020, at 18:21.
Content is available under Creative Commons Attribution/Share-Alike License; additional terms may apply. See Terms of Use for details.