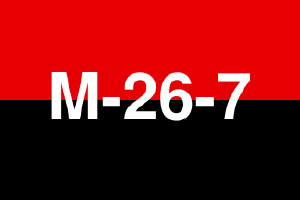 Flag of the 26th of July Movement

The Cuban Revolution overthrew the regime of Fulgencio Batista by the 26th of July Movement and established a new Cuban government led by Fidel Castro in the 1950s. It began with the assault on the Moncada Barracks on July 26, 1953, and ended on January 1, 1959, when Batista was driven from the country. The rebels further prevented Batista's return when the cities of Santa Clara and Santiago de Cuba were seized by Che Guevara and Fidel Castro's surrogates Raúl Castro and Huber Matos, respectively. The term "Cuban Revolution" is also used to refer to the social revolution after the overthrow of the Batista government and the adoption of Marxist principles by the new Cuban Government.

In the context of the Cold War between the Western world, led by the United States and its allies, and the Soviet Union and its Eastern-bloc allies, the Cuban Revolution bought what was perceived to be the threat of communism very close to the shores of the United States. Thousands of Cuban refugees migrated to the Florida peninsula. The Cuban Missile Crises of 1962 was one of several resulting situations. The presence of Soviet advisers in Cuba potentially placed Russian intelligence operates physically much closer to U.S. territory than American operatives could be located in relation to Russian territory. Cuba would become a venue for United States intelligence gathering and also for the support of anti-Castro elements, including the failed Bay of Pigs Invasion of 1961.

On July 26, 1953, a group of approximately one hundred poorly armed guerrillas attacked the Moncada Barracks. Many of them were killed in the battles after the attack. The survivors, among them Fidel Castro Ruz and his brother Raúl Castro, were captured shortly afterwards. In a highly political trial, they were sentenced to long prison terms. Castro was sentenced 15 years in the presidio modelo located on Isla de Pinos.

In 1955, due to pressure from civil leaders, the general opposition, and the Jesuits who had helped educate Fidel Castro, and perhaps because he had known the Castro brothers in their youth, Batista freed all political prisoners, including the Moncada attackers. The Castro brothers went into exile in Mexico, where they gathered more exiled Cubans to fight in the Cuban revolution for the overthrow of Batista. During that period, Castro also met the Argentine doctor Ernesto "Che" Guevara, who joined their forces. They were trained by Alberto Bayo, a former military leader of the failed "loyalists" in the Spanish Civil War.

The group training in Mexico under the leadership of Fidel Castro left for Cuba in November 1956, in a small yacht named Granma. They hoped their landing in Eastern Cuba would coincide with planned uprisings in the cities and a general strike, coordinated by the llano wing of the "26th of July Movement." It was their intention to launch an armed offensive and swiftly topple the Batista government.

The Granma was delayed en route to Cuba, arriving late and at a location further east than was planned. This dashed any hopes for a coordinated attack with the llano wing of the movement. After arriving and exiting the ship, the band of rebels began to make their way into the Sierra Maestra mountains, a range in Southeastern Cuba. Shortly after their trek began, they were attacked by men from the army. Most of the Granma participants were killed in this attack, but a small number, between one and two dozen, escaped. The survivors were separated from one another, and alone or in small groups, wandered through the mountains, looking for other survivors. Eventually, this small group of persons, would find one another with the help of peasant sympathizers. This small group of people, which included Fidel Castro, Ernesto Che Guevara, Camilo Cienfuegos, and Raúl Castro would form the core leadership of the guerilla army.

From 1956 through the middle of 1958, Castro, with the aid of the Frank Pais and Ramos Latour, Huber Matos, and many others, staged successful attacks on small Batista garrisons in the Sierra Maestra mountains. Batista forces tried bloody repression to retain control and the cities in Cuba remained under Batista's control until the end. Che Guevara and Raúl Castro helped consolidate political control in the mountains through executions of Batista Loyalists and potential rivals to Castro. The irregular poorly armed escopeteros harassed the Batista forces through the foot hills and the plains of Oriente Province; in addition these much maligned forces provided Castro's main forces with moderate military support, intelligence, and protected supply lines. Thus, Castro achieved military control of these mountains.

During this time, Castro's forces were quite small, at times less than 200 men, while the Cuban army and police force numbered between 30,000 and 40,000 in strength (Bockman 1984). Yet nearly every time the army fought against the revolutionaries, they were the ones who retreated from the fight. The Cuban military was remarkably ineffective. A growing problem for the Batista forces was an arms embargo imposed on the Cuban government by the United States government on March 14, 1958. The Cuban air force rapidly lost its power as planes could not be repaired without spare parts from the U.S.

Batista forces finally responded with an attack on the mountains called Operation Verano (the rebels called it "la Ofensiva"). Some 12,000 soldiers (more than half new, untrained recruits) attacked into the mountains. In a series of small scale fights, the Cuban army was defeated by Castro's determined fighters. In one battle (the Battle of La Plata) which lasted from July 11 until July 21, Castro's forces defeated an entire battalion, capturing 240 men, while losing just 3 of their own. The tide nearly turned on July 29 when Castro's small army (some 300 men) was nearly destroyed at the Battle of Las Mercedes. The Cuban army under General Cantillo lured Castro's forces into a trap. After two days of fighting, Castro's forces lost 70 men, nearly one third of his men. With his forces pinned down by superior numbers, Castro asked for, and was granted, a temporary cease-fire (August 1). Over the next seven days, while fruitless negotiations took place, Castro's forces gradually escaped from the trap. By August 8, Castro's entire army had escaped back into the mountains. Operation Verano had been a failure for the Batista government.

On August 21 1958, after the defeat of the Batista "ofensiva," Castro's forces began their offensive. There were four fronts in the "Oriente" province (now divided into Santiago de Cuba, Granma, Guantánamo and Holguín) directed by Fidel Castro, Raúl Castro and Juan Almeida. Descending from the mountains, with weapons captured during the ofensiva and smuggled in by plane, Castro's forces won a series of victories. The major Castro victory at Guisa, and the succeeding capture of several towns (Maffo, Contramaestre, Central Oriente, etc.) consolidated victory on the Cauto plains.

Meanwhile, three columns under the command of Che Guevara, Camilo Cienfuegos, and Jaime Vega proceeded westward toward the provincial capital of Santa Clara. Jaime Vega's column was ambushed and destroyed. The surviving two columns reached the central provinces, where they joined efforts with several other resistance groups not under the command of Castro. Cienfuegos won a key victory in the Battle of Yaguajay on December 30, 1958 (earning him the nickname "The Hero of Yaguajay"). The next day (December 31), in a scene of great confusion, the city of Santa Clara was captured by the combined forces of Che Guevara, Cienfuegos, and William Alexander Morgan. News of these defeats caused Batista to panic. He fled Cuba for the Dominican Republic just hours later on January 1, 1959.

Castro learned of Batista's flight in the morning and he immediately started negotiations to take over Santiago de Cuba. On January 2, the military commander in the city, Colonel Rubido, ordered his soldiers not to fight and Castro's forces took over the city. The forces of Guevara and Cienfuegos entered Havana at about the same time. They had met no opposition on their journey from Santa Clara to Cuba's capital. Castro himself arrived in Havana on January 6 after a long victory march. Officially, the leader of Cuba was the new President Urrutia, in reality, Castro was in control.

Hundreds of suspected Batista-era agents, policemen and soldiers were put on public trial for human rights abuses and war crimes, including murder and torture. Most of those convicted of murder were executed by firing squad, and the rest received long prison sentences. One of the most notorious examples of “revolutionary justice” being the executions of over 70 captured Batista regime soldiers, directed by Raúl Castro after capturing Santiago. Guevara was appointed supreme prosecutor in La Cabaña Fortress. This was part of a large-scale attempt by Fidel Castro to cleanse the security forces of Batista loyalists that could launch a counter-revolution. Many others were dismissed from the army and police, and some high-ranking officials in the ancien régime were exiled as military attachés.

According to geographer and Castro Comandante Antonio Núñez Jiménez, 75 percent of Cuba's best farmable land was owned by foreign individuals or foreign (mostly U.S.) companies. One of the first policies by the newly formed Cuban government was eliminating illiteracy and implementing land reforms. Land reform efforts did not raise living standards because instead of subdividing larger holdings into small private farms, cooperatives were formed. Comandante Sori Marin, nominally in charge of land reform, objected and fled and eventually was executed. Many other anti-Batista, but not Marxist, rebel leaders were forced in to exile, purged in executions, or in failed uprisings such as those of the Beaton brothers.

To replace his attrited power base among the former rebels, shortly after taking power the new Cuban government also created a Revolutionary militia. Castro also initiated Committees for the Defence of the Revolution or CDR’s in late September of 1960. The CDR’s were tasked with the responsibility of keeping "vigilance against counter-revolutionary activity." Local CDR’s were also tasked with keeping a detailed record of each neighborhood’s inhabitant’s spending habits, level of contact with foreigners, their work and education history, and any "suspicious" behavior.

Castro also nationalized all United States and other foreign-owned property in the nation on August 6, 1960. Land and companies owned by upper and middle class Cubans were also nationalized, including the plantations owned by Fidel Castro's family. The United States, in turn, responded by placing an embargo on Cuba, which is still in place after more than 40 years.

Many attempts have been made by the U.S. to overthrow Castro's government. One of the most notorious is the failure of the Bay of Pigs Invasion. During the Cold War, the U.S. saw Cuba as a strategic location and wanted to invade. But after the Cuban Missile Crisis, it promised verbally to never invade the island.

Failed rebellions now called War Against the Bandits continued until about 1965.

Retrieved from https://www.newworldencyclopedia.org/p/index.php?title=Cuban_Revolution&oldid=1037875
Categories:
Hidden category:
This page was last edited on 5 June 2020, at 19:27.
Content is available under Creative Commons Attribution/Share-Alike License; additional terms may apply. See Terms of Use for details.