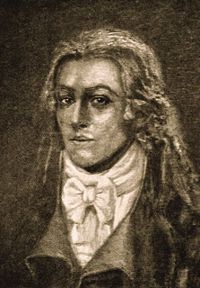 Tommaso Michele Francesco Saverio Traetta (March 30, 1727 – April 6, 1779) was an Italian composer in the Classical era who was influential in the reform opera movement which combined elements of the French opera comique and the Italian opera seria to create a more emotional and effective musical production. Traetta was also one of the first composers who listened to the concerns of the librettists and worked with them to reform the structure of Italian operas. His sensitivity and ability to accommodate the needs of the librettists foreshadowed the success of his operas into translating the music for others. Traetta's unselfish actions towards the facility of the libretto demonstrated that music contains a cooperative give and take action, an action of living for the sake of others.

Traetta was born in Bitonto, a town near Bari, right down near the top of the heel of the boot of Italy. He eventually became a pupil of the composer, singer and teacher, Nicola Porpora, in Naples, and scored a first success with his opera Il Farnace, in Naples, in 1751. Around this time he seems too have come into contact with Niccolò Jommelli. From here on in, Traetta seems to have had regular commissions from all around the country, running the gamut of the usual classical subjects. Then in 1759, something untoward happened that was to trigger Traetta's first operatic re-think. He accepted a post as court composer at Parma.

Parma, it has to be said, was hardly an important place in the grand scheme of things—a minor dukedom, but a dukedom with a difference, because the incumbent was Spanish and his wife was French. Parma had regularly changed owners between Austrians and Spaniards and the current Duke was the Infante Felipe. And in one of those inter-dynastic marriages which so complicate the history of Europe, he had married the eldest daughter of Louis XV. With the result that there was currently in Parma a craze for all things French, and in particular a fixation with the splendor of Versailles. Which is where the influence of the composer Jean-Philippe Rameau comes in. It was in Parma that Traetta's operas first began to move in new directions. And as a result there is no doubt that Antigona, his 1772 opera for St. Petersburg, was amongst his most forward-looking, the closest he approached the famous reform ideals usually associated with Gluck, but in fact a current that was felt by several other composers of the time.

It was in Parma, at the court of the Bourbon Duke there, that Traetta ran unexpectedly headlong into some support from France. In Parma in 1759, he found a number of significant collaborators, and he was fortunate in finding that the man in charge of opera there was a highly-cultivated Paris-trained Frenchman, Guillaume Du Tillot, who had the complete cultural portfolio among all his other responsibilities as Don Felipe's First Minister. To judge from the general stylistic influence in terms of grand scenic effects, and from some specific musical borrowings, Traetta had access in Parma to copies and reports of Rameau's operas. To their influence, Traetta added some ingredients of his own, especially a feeling for dramatic color, in the shape of his melodies and his use of the orchestra. The result was a combination of Italian, French and German elements, which even anticipate the Sturm und Drang movement that was to flourish a few years later, further north.

The first fruit of this francophilia was the opera Traetta wrote in 1759. Ippolito ed Aricia owes a lot to Rameau's great tragédie lyrique of 1733, Hippolyte et Aricie. But Traetta's is no mere translation of Rameau. Frugoni, Traetta's librettist in Parma, completely reworked the original French version by abbé Pellegrin, which itself had been based on Racine, in its turn stemming ultimately from ancient Greek roots—the Hippolytus of Euripides. Frugoni retained certain key French elements: the five-act structure as against the customary three; the occasional opportunities for French-style spectacle and effects and in particular the dances and divertissements that end each of those five acts; and a more elaborate use of the chorus than for instance in Hasse and Graun and Jommelli.

Through the following decade, the 1760s, Tommaso Traetta composed music unceasingly—not just opera seria, either. There was a clutch of comedies as well, to say nothing of sacred music composed to imperial order. But opera seria was the generally what her imperial majesty commanded. Traetta's first operas for Catherine the Great seem to have been largely revivals and revisions of his earlier works. But then in 1772 came Antigona —and for whatever reason, whether it was Traetta's own inclination or the promptings of his librettist Marco Coltellini or the availability of the soprano Caterina Gabrielli, the new opera reached areas of feeling and intensity he had never explored before, even in Parma. Here, in Saint Petersburg, Traetta's finest work, the opera Antigona, received its first performance at the Court of Catherine the Great in 1772.

The Court Opera of Catherine the Great performed in a theatre inside the Winter Palace itself, created by the architect Bartolomeo Francesco Rastrelli—another Italian—who was the architect of many buildings in St. Petersburg, including the Hermitage. The theatre was quite close to the Empress' own apartments. Too close, in fact, because in 1783, that is to say some time after Traetta's departure, she ordered it to be closed and a new one built. Some years before that she had already booted out Rastrelli, who had been the favorite architect of her predecessor. Traetta too was to depart, though possibly it was the harsh climate of Peter the Great's still relatively new and very damp capital, rather than the Empress' boot, that led him to leave St Petersburg in 1775, and resume the opera composer's peripatetic life, even writing two works for London: Germondo in 1776 and Telemaco the year after.

Traetta died two years later, in April 1779, in Venice, and by then, opera seria was for a variety of reasons, artistic and financial, a threatened species. It was to take a genius to prolong its active life, above all in a masterpiece from 1781 called Idomeneo, and then again one final time ten years after that, using an old warhorse of a Metastasio text for a libretto—La clemenza di Tito. The composer of this final flash of opera seria glory to outshine them all, was no stranger to Naples and to Neapolitan opera—Wolfgang Amadeus Mozart.

Retrieved from https://www.newworldencyclopedia.org/p/index.php?title=Tommaso_Traetta&oldid=1033741
Categories:
This page was last edited on 14 March 2020, at 03:58.
Content is available under Creative Commons Attribution/Share-Alike License; additional terms may apply. See Terms of Use for details.