Technopark Kerala refers to a technology park in Thiruvananthapuram (Trivandrum), India dedicated to electronics, software, and other Information Technology (IT) ventures. The technology park represents the first, and largest, in India.[1] Launched in 1990, Technopark currently has 3.2 million square feet (310,000 square meters) of built-up space, serving as home to over 125 companies, which employ more than 17,000 professionals. They include one CMMI level 5 and PCMM level 5 company, four CMM Level 5, two CMM Level 3 and several ISO 9001 certified companies. The Government of Kerala promotes the Technopark with a mandate to nurture entrepreneurship and employment in the region. The policy of economic liberalisation initiated by the government of India in 1991 and the rapid growth of the global software industry during the 1990s has substantially contributed to the growth of Technopark. Over 70% of Kerala's IT exports come from Technopark.[2][3]

The Indian government's initiative to establish Technopark, Kerala, arose from an awareness that economic success in the twenty-first century depended upon becoming competitive in the international market place in Information and Knowledge Technology. The Indian government understood that the traditional course of developing heavy industries before moving to clean industries could be modified with the advent of the Knowledge and Information Age. Shortly after the establishment of India as an independent republic, the importance of the computer, communications, and biological sciences became evident. The Indian government's support for the creation of Technopark, Kerala from a campus embracing Indian and international companies to the establishment of a technology city has rightly gained the attention of the world community. 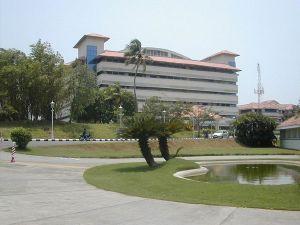 Technopark campus with the Bhavani building

The Government of Kerala owns and administers Technopark, directed by a Chief Executive Officer (CEO). In addition to that, a Governing Council and a Program Implementation Board, both of which include top officials of the Government, guide the enterprise.[4] The Park Centre, which houses the administrative offices including that of the CEO, conducts the administration of the campus. Technopark also hosts a Technology Business Incubation Cell and Software Competency Centre, located in the Park Centre. Wi-Fi serves the entire campus.

Technopark aimed to create infrastructure and provide support required for the development of high-technology companies, summing that aim up in its mission statement: "Provide, Viably, Superior Environment and Services with Assured Quality of Service to Make Technology Businesses Intrinsically Competitive And Successful, and Promote Regional Development through Synergistic Linkages Between Industry, Government and Academia, based on Continuous Improvement and Innovation."[5]

Technopark aims to provide all the infrastructure and support facilities needed for IT/ITES and electronics companies to function. As well as built-up office space, it also provides all utilities as well as the connectivity, either directly or through private partners. Technopark provides business incubation facilities for start-up firms as well as some social infrastructure for the personnel working in the park. 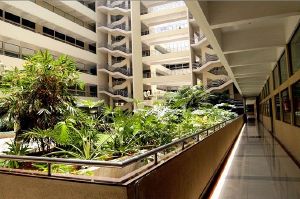 Currently about a dozen buildings stand inside the Technopark campus intended for software development. Six of the buildings in Technopark have the names of rivers in Kerala—the Pamba, the Periyar, the Nila, the Chandragiri, the Gayathri and the Bhavani. Thejaswini, the seventh building, had been commissioned in February 2007, with over 600,000 sq ft. (60,000 sq m.) of carpet area. Private enterprises such as TCS, M-Square, IVL, NEST, IBS, Leela Group and others inside the Phase I campus maintain independent buildings. Those buildings aggregate to a total of about 3.5 million sq ft (350,000 sq m) of space, either complete or under construction. 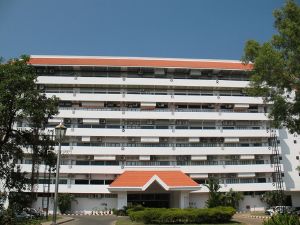 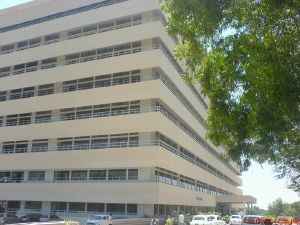 Other buildings in the campus include:

Technopark has support facilities such as a satellite earth station, a 200-seater convention center, a club and guest house, a shopping complex (Techno-Mall), banks, ATMs, restaurants and conference rooms on campus. Exemption from State level clearances, as well as through ready-to-use incubation facilities, accelerates setting up of new units.

Trivandrum connects to the National Internet Backbone, while a variety of bandwidth providers, including Reliance Infocomm, Bharti Airtel, VSNL and Asianet Dataline, service Technopark through fibre optic lines in the campus. A satellite earth station operates inside the Phase I campus as well.

Recently, FLAG Telecom—a subsidiary of Reliance Infocomm—has landed its FALCON global cable system at Trivandrum. That provides up to 2.56 Terabits of connectivity with the Middle East, South East Asia, Far East, Europe and North America (in conjunction with the rest of the FLAG network). Trivandrum will also have direct connectivity to the Maldives and Sri Lanka within the FLAG network.[9] The direct access to the international cable network provides lower bandwidth rates to companies operating at Technopark, compared to elsewhere in the country. 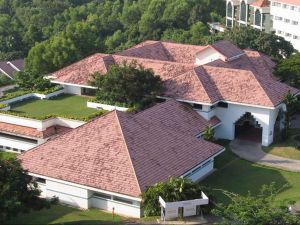 The Technopark Business Incubation Centre (T-BIC) aims to provide economically plug and play facilities to start-ups in the IT/ITES fields. That facility has given rise to over thirty successful ventures, many of whom have expanded by taking up space elsewhere in Technopark. T-BIC currently has 8,000 ft (800 m) at Park Centre, while currently expanding with another 10,000 ft (1000 m) in the newest Technopark building, Thejaswini.[10] Torque, which specialises in mobile solutions, numbers among one of the latest companies started at T-BIC.[11]

The Asian School of Business (ASB), started in 2004, provides post graduate management education. Located inside Technopark, ASB plans to move to a nearby campus in 2007. ASB offers the full-time Post Graduate Programme in Management (PGPM).[14] A Board of Governors which includes stalwarts of the Indian IT industry like Tata Consultancy Services CEO S. Ramadorai and Infosys CEO Kris Gopalakrishnan, manages the Asian School of Business.[15]

Expansion of Technopark and new projects

Technopark has acquired 86 acres (0.35 sq km) of land, for its Phase II expansion. 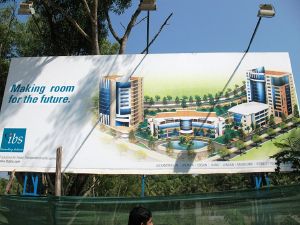 Technopark has almost completed acquisition of 100 acres (0.4 sq km.) of land for Phase III expansion. Firms like Larsen & Toubro and the Rahejas plan major developments within and around Technopark as well. L&T has already announced its plans to set up a 35 acre (0.15 sq km.) hybrid IT-and-residential park as part of Technopark Phase III.[4] Patni Computer Systems has already announced plans to set up a Rs 150 Crore ($US 32 Million) Development Centre in Phase III.[21]


The IInd and IIIrd phase of expansion of Technopark, along with the ramping up of operations of the existing IT units, expect an investment of around Rs. 1000 Crore (US$218 Million) and an additional 35,000 people employed.

The Phase IV of Technopark, referred to as the Technocity project, involves a mixed use—IT, biotechnology, nanotechnology, commercial and residential development spread over 500 acres (2 sq km) of land, about 5 km (1.6 miles) from the present campus. The government has been purchasing the land. It will be a self contained IT township with the potential to employ a hundred thousand professionals.[22][23]

Once Technocity's land acquisition has been completed, Technopark will have an extent of close to 850 acres (3.5 sq km), making it one of India's largest IT satellite townships, in geographic area, comparable to that of projects like the Mahindra World City in Chennai.

Three Special Economic Zones (SEZs) inside Technopark encompass Phases I, II and III.[24] Phase IV will also become an SEZ once land acquisition has been completed. That provides a range of attractive economic benefits to the companies operating within Technopark 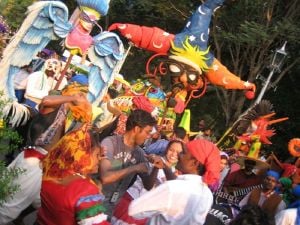 Technopark has the motto Harmony at Work, boasting a cosmopolitan and diverse culture. Often acclaimed as one of the greenest IT parks in the world,[25] the presence of balconies and expansive terraces on almost all its buildings ensures that the professionals working inside can enjoy the greenery and the fresh air.

Technopark has companies and people from across India and the world. Other than domestic firms, IT and ITES companies from the United States, United Kingdom, Germany, Japan, Canada, Italy and other countries operating here. To promote harmony in diversity, Technopark has set up a range of facilities and organises an annual set of events, ranging from technical conferences to trekking expeditions to the annual fiesta, Tech-a-break.

Located inside the Technopark Phase I campus, the Club provides a diverse set of facilities for the professionals to unwind. Those include a gym, a swimming pool and courts for badminton and table tennis and beach volley ball. The Club also has a massage parlour, Vaisakha—a multi cuisine restaurant and provides tour operators for organising recreational travel of employees and their families.

The Club often organises multi cuisine food festivals to cater to the tastes of the diverse mix of people in Technopark. Other events organised by the Club include discos, cultural competitions, and other events. Performers include well known rock groups, DJs, and dance performers.[26]

The Club aims to take advantage of the diverse environs of Trivandrum to engage in adventure activities along with enjoying their idyllic beauty and solitude. With a combination of hills, backwaters, beaches and forests close to Trivandrum, employees have a variety of activities close at hand.[27] 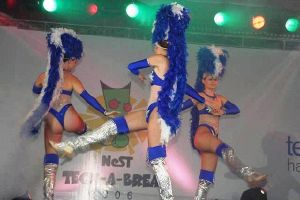 Tech-A-Break refers to Technopark's annual cultural festival.[28] Typically held over the course of a week, it starts with a Carnival parade and ends with performance by well-known professional bands, dance groups and musicians.[28] In between, teams and groups from companies compete against each other in a sequence of cultural competitions. Those include dance and musical contests, informal events, quiz and a personality contest—Mr. and Miss Technopark.[28] The parade crosses Technopark, announcing the beginning of the events held at the 2000 seat Amphitheatre near Park Centre.

Technopark has become the largest employer in Kerala,[29] with over fifteen thousand people working directly in the facility itself. Thus its impact on the city of Trivandrum has been enormous.

Its cosmopolitan workforce has helped bring diversity to the city's population, along with other national entities like the Vikram Sarabhai Space Centre, Southern Command HQ of the Indian Air Force, Government of India offices and major educational institutions.

The Government has plans to set up an IT Corridor along the National Highway-47 (NH 47), starting from Technopark towards Kollam.[30] Construction converting National Highway 47 into a four lane, high speed corridor has begun. Experts like Kiran Karnik — president of NASSCOM, India's apex organisation of IT firms, have emphasised to catalyse the spread of IT by providing high speed connectivity to the neighbouring city of Kochi.[31]

The influx of high-income IT professionals has also resulted in the arrival of high-end apartment complexes, retail chains, top class hotels, multiplexes and all the other facilities of a modern city. An improved road network and a high speed transportation avenue along the alignment of the IT Corridor has moved out of the planning stage and into the construction stage.[32] A massive International Convention Center at nearby Akkulam, with a projected price tag of Rs 150 Crores (US$ 32 Million), has been undertaken by a joint venture of the Raheja Group and the Government of Kerala, expected to boost the supporting infrastructure of Technopark.[33][34]

The increase in air travel brought about by the growing IT industry has also prompted the rapid expansion in flight services, especially domestic flights, to and from the nearby Trivandrum International Airport. Connectivity with IT hubs like Bangalore, Chennai and Hyderabad have significantly improved in recent months. That has benefited the general populace as well.

The combined disposable income of Technopark employees has brought an infusion of wealth into the entire region through secondary service activities like retail, hospitality, transportation, and financial services. With a potential hundred and fifty thousand IT professionals working in the four Phases of Technopark by 2012,[35] the impact on the economy of the city and its suburbs, with a population of about 2 million, will be significant.