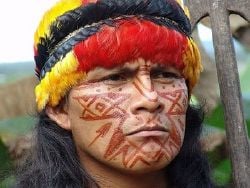 A Shuar man in traditional dress

The Shuar live in tropical rainforests between the upper mountains of the Andes, and the tropical rainforests and savannas of the Amazonian lowlands, in Ecuador and Peru. They live in various places—thus, the muraiya (hill) shuar are people who live in the foothills of the Andes; the achu (swamp-palm) shuar (or Achuar) are people who live in the wetter lowlands east of the Andes (Ecuador and Peru). They are one of the four sub-tribes (AShuar, Aguaruna, Huambisa, and the Shuar) of the Jivaros who inhabit the tropical forest of the Ecuadorian and Peruvian Amazon. Of these, the Shuar, are most commonly referred to when speaking of the Jivaro Indians.

The Shuar have achieved notoriety through their customary practice of head-shrinking. For the Shuar this practice was rooted in their religious beliefs which said that the soul of the victim was contained in the shrunken head. However, when Europeans sought these "trophies" out of macabre fascination, the Shuar obliged by killing more of their rivals, using the weapons they traded for the heads to kill more efficiently. This violent stereotype also contributed to the formation of elite units of Shuar soldiers by the Ecuadorian army. While this is a perversion of their true way of life, it nonetheless allowed the Shuar to survive the colonization period so that their culture and lineage was not lost, providing hope for the future of these people.

Origin of the name Shuar

Shuar, in the Shuar language, means "people."[1] Shuar refer to Spanish-speakers as apach, and to non-Spanish/non-Shuar speakers as inkis. Europeans and Americans used to refer to Shuar as jívaros or jíbaros; this word probably derives from the sixteenth century Spanish spelling of "shuar" (Gnerre 1973) but has taken other meanings including "savage" (and Shuar consider it an insult). The Shuar are popularly depicted in a wide variety of travelogue and adventure literature because of Western fascination with their former practice of shrinking human heads (tzantza).

From the time of first contact with Europeans in the sixteenth century to the formation of the Shuar Federation in the 1950s and 1960s, Shuar were semi-nomadic and lived in separate households dispersed in the rainforest, linked by the loosest of kinship and political ties, and lacking corporate kin-groups or centralized or institutionalized political leadership. The center of Shuar life was a relatively autonomous household consisting of a man, his wives (usually two), unmarried sons, and daughters. Upon marriage sons would leave their natal household, and sons-in-law would move in. Men hunted and women gardened.

When Shuar first made contact with Spaniards in the sixteenth century, they entered into peaceful trade relations. They violently resisted taxation, however, and drove the Spaniards away in 1599.

At the end of the nineteenth century Jesuits re-established missions among the Shuar, and poor and landless Euro-Ecuadorians from the highlands (colonos) began to settle there. Shuar entered into peaceful trade relations, exchanged land for manufactured goods, and began sending their children to mission boarding schools to learn Spanish. In 1935, the Ecuadorian government created a Shuar reserve, in part to regulate Euro-Ecuadorian access to land, and gave Salesian (Catholic) missionaries charge over the reserve. Missionaries were largely successful in the acculturation process, teaching Shuar Spanish, converting Shuar to Christianity, encouraging the Shuar to abandon warfare and the production of shrunken heads, encouraging Shuar to abandon the puberty rites through which Shuar acquired an arútam wakaní, and advising Shuar to participate in the market economy. They were largely but not completely successful in persuading Shuar to abandon polygyny for monogamy. They were relatively unsuccessful in discouraging the practice of shamanism.

By the 1950s Shuar had lost a considerable amount of land to settlers. At this time they abandoned their semi-nomadic and dispersed settlement pattern and began to form nucleated settlements of five to thirty families, called centros (Spanish for "centers"). These centros facilitated missionary access to Shuar. They also provided a basis for Shuar petitions to the Ecuadorian government for land; in return Shuar promised to clear rainforest to convert to pasture, and the government provided loans for Shuar to purchase cattle which they would raise for market.

In the 1960s Salesian missionaries encouraged leaders of the centros to meet and form a new organization. In 1964 they formed the Federacíon Interprovincial de Centros Shuar-Achuar ("Interprovincial Federation of Shuar and Achuar Centros.") The Federation is democratic and hierarchically organized, most of its leaders are salaried by the Ecuadorian state. In 1969 the Federation signed an accord with the Ecuadorian government in which the Federation assumed administrative jurisdiction over the Shuar reserve. The Federation assumed the duties of educating children, administering civil registration and land-tenure, and promoting cattle-production and other programs meant to further incorporate Shuar into the market economy. Since that time, the Federation has splintered into several groups, including a separate Achuar Federation, although the various groups maintain cordial relations. Many Achuar live in Ecuador, although most live in Peru.

Shuar generally do not believe in natural death, although they recognize certain epidemics such as measles and scarlet fever are diseases introduced through contact with Europeans or Euro-Americans. They fought primarily with spears and shotguns, but—like many other groups in the region—also believed that they could be killed by tsentsak, invisible darts. Any unexplained death was attributed to such tsentsak.

According to Shuar beliefs, although tsentsak are animate, they do not act on their own. Shamans (in Shuar, Uwishin) are people who possess and control tsentsak. To possess tsentsak they must purchase them from other shamans; Shuar believe that the most powerful shamans are Quichua-speakers, who live to the north and east. To control tsentsak Shuar must ingest natem (Banisteriopsis caapi). Many Shuar believe that illness is caused when someone hires a shaman to shoot tsentsak into the body of an enemy. This attack occurs in secret and few if any shamans admit to doing this.

At that time, Shuar culture functioned to organize and promote a warrior society. Boys of about eight years old would be taken by their fathers or uncles on a three to five day journey to a nearby waterfall, during which time the boy would drink only tobacco water. At some point the child would be given maikua (Datura arborea, Solanaceae), in the hope that he would then see momentary visions, or arútam. These visions were produced by a wakaní or ancestral spirit. If the boy were brave enough he could touch the arútam, and acquire the arútam wakaní. This would make the boy very strong, and possession of several arútam wakaní would make the boy invincible. Shuar, however, believed that they could easily lose their arútam wakaní, and thus repeated this ritual several times. 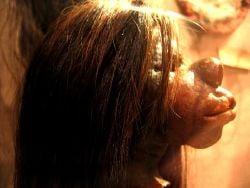 Shrunken head from the upper Amazon region, in the Pitt Rivers Museum, Oxford.
Did you know?
Shuar traditionally created "tzantza" or shrunken heads to capture the soul of the deceased

In the nineteenth century muraiya Shuar became famous among Europeans and Euro-Americans for their elaborate process of shrinking the heads of slain Achuar. Although non-Shuar characterized these shrunken heads (tzantza) as trophies of warfare, Shuar insisted that they were not interested in the heads themselves and did not value them as trophies. Instead of valuing the shrunken heads as trophies, they sought the muisak, or soul of the victim, which was contained in and by the shrunken head. Shuar men believed that control of the muisak would enable them to control their wives' and daughters' labor. Since women cultivated manioc and made chicha (manioc beer), which together provided the bulk of calories and carbohydrates in the Shuar diet, women's labor was crucial to Shuar biological and social life.

In the late 1800s and early 1900s Europeans and Euro-Americans began trading manufactured goods, including shotguns, in return for shrunken heads. The result was an increase in local warfare that has contributed to the stereotype of Shuar as violent.

The discovery of oil in the upper Amazon has motivated Ecuadorian and Peruvian interest in the region. In the twentieth century, Ecuadorian Shuar and Peruvian groups like the Achuar have had significantly different histories. There are at least 40,000 Shuar, 5,000 Achuars, and 700 Shiwiars in Ecuador.

Shuar identity is very strong; nevertheless, most Shuar also identify strongly to the Ecuadorian nation-state and have entered Ecuadorian electoral politics. Many Shuar also serve in the Ecuadorian Army, and the Army has appropriated the nineteenth century stereotype of Shuar as "violent savages," forming elite units of Shuar soldiers (although all commissioned officers are non-Shuar). These units distinguished themselves in the 1995 Cenepa War between Ecuador and Peru.

Retrieved from https://www.newworldencyclopedia.org/p/index.php?title=Shuar&oldid=1044380
Categories:
Hidden category:
This page was last edited on 27 October 2020, at 17:14.
Content is available under Creative Commons Attribution/Share-Alike License; additional terms may apply. See Terms of Use for details.