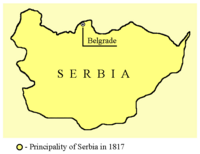 Principality of Serbia in 1817

Serbian revolution or Revolutionary Serbia refers to the national and social revolution of the Serbian between 1804 and 1817, during which Serbia managed to emancipate from the Ottoman Empire and exist as a sovereign European nation-state. The revolution was inspired by the developing concept of the nation state itself stimulated by the French Revolution. Serbs were encouraged by Russia to re-assert their national and ethnic identity and found inspiration too in memories of their brief imperial past. The revolutionary leaders stressed the Christian, as opposed to Muslim identity of their national heritage. The term "Serbian revolution" was invented by a famous German historian Leopold von Ranke in his book Die Serbische Revolution, published in 1829.[1]

These events marked the foundation of Serbia.[2] By 1817, Serbia was constituted as a Principality under the rule of Miloš Obrenović. It was not until 1878, though, that the Ottomans officially recognized Serbia's independence. In 1882, the Principality became a kingdom and in 1918, united with Croatia, Slovenia, and Bosnia to form what later became Yugoslavia. Dominated by the Serbian royal family, for many Serbs, this resurrected the Serbian Empire, or Greater Serbia. Having resisted Ottoman domination for more than 70 years before their final defeat, this new success in asserting their independence from the Turks later informed notions of Serbia's role as a buttress against the world of Islam. From the beginning of the 1990s Islam was increasingly perceived as a threat to the Western world, due in part to Samuel P. Huntington's 1992 article on the Clash of Civilizations.

Following the collapse of Yugoslavia in 1992, some Serbs were reluctant to recognize the independence of what had been constituent republics of the federation, and tried to retain these within Yugoslavia, claiming that all territory that had a Serb population properly belonged to Serbia. On the one hand, the Serbian revolution saw a people achieve their political freedom and right to govern themselves. These events contributed to the polarization of the Balkans, and to the war that erupted in Bosnia. One vision for the Balkans is as a bridge between cultures—between Europe and the world of Islam. Another vision sees the Balkans as a buttress. Those who want to unify humanity, to bridge divides by emphasizing common values and common responsibility towards our shared planetary home suggest that Balkan history can be written in a way that shows how Muslims, Christians and Jews often lived there in harmony, not hostility.[3]

The background to the Revolution lies in the Kočina Krajina Serb rebellion, which was an uprising of Serbs against the Ottoman Empire from Feb 1788-September 7, 1788. Koča Andjelković (b. 1755-d. 1788)[4] was the leader of the uprising, which was aided by the Habsburg Empire. It enabled the Habsburgs to conquer Serbia from the Ottomans, attaching the territory of the Pashaluk of Belgrade and to other Serb-populated areas of their Empire. The crownland of (third) Habsburg Serbia existed for 3 years.[5]

By 1791, however, the Austrians were forced into a withdrawal across the Danube and Sava rivers, joined by thousands of Serbian families who feared Ottoman revenge for supporting the Habsburgs. Retaliation of the Ottomans in the outset of the uprising influenced the Serb determination to gain their freedom, from the Ottomans fifteen years later, when the first phase of what was later called the Serbian revolution began.

Following the Ottoman reconquest, the Ottoman Sultan did introduce some reforms which were intended to ease pressure on Serbs and granted greater autonomy. These, though, were short-lived. By 1799, the Janissary corps had returned, suspended the Serb autonomy and drastically increased taxes, enforcing martial law in Serbia.

Serb leaders from both sides of the Danube began to conspire against the dahias (Janisarry leaders). When they found out, they rounded up and murdered tens of Serbian noblemen on the main square of Valjevo in an event known today as Seča knezova ("Massacre of Serbian knights") on February 4, 1804. The massacre outraged the Serbian people and incited the revolt across the Pashaluk of Belgrade. Within days, in the small Šumadija village of Orašac, the Serbs gathered to proclaim the uprising, electing Karađorđe Petrović as the leader. The Proclamation[6] (1809) by Karadjordje Petrović in the capital Belgrade, represented the peak of the revolution. It called for unity of the Serbian nation, emphasizing the importance of freedom of religion, Serbian history, and rule of law—all of which the Ottoman Empire could not or had denied to provide, being a non-secular Muslim state. It also called on Serbs to stop paying taxes to the Ottoman Sultan because they were based on religious affiliation. That afternoon, a Turkish inn (caravanserai) in Orašac was burned and its residents fled or were killed, followed by similar actions country-wide. Soon, the cities Valjevo and Požarevac were liberated, and the siege of Belgrade was launched. 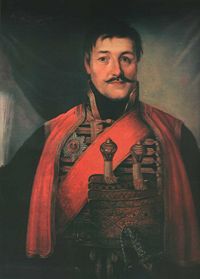 During almost 10 years of the First Serbian Uprising (1804-1813), Serbia perceived itself as an independent state for the first time after 300 years of Ottoman and short-lasting Austrian occupations. Revolutionary Serbia responded to the Ottoman Massacre of Serbian knights by establishing its separate institutions, such as the government (Praviteljstvujusci Sovjet), Serbian Prince, Parliament (Zbor), and University of Belgrade. Following the French invasion in 1812, the Russian Empire withdrew its support for the Serb rebels; unwilling to accept Ottoman conditions, Serbs were fought into submission following the brutal Ottoman incursion into Serbia.[7]

The failure of the first revolution did not end Serbian hopes for freedom. In 1814, an unsuccessful Hadži Prodan's revolt was launched by Hadži Prodan Gligorijević, one of the veterans of the First Serbian Uprising. He knew the Turks would arrest him, so he thought it would be the best to resist the Ottomans; Milos Obrenović, another veteran, felt the time was not right for an uprising and did not provide assistance.

Hadži Prodan's Uprising soon failed and he fled to Austria. After the failure of this revolt, the Turks inflicted more persecution against the Serbs, such as high taxation, forced labor, and rape. In March 1815, Serbs had several meetings and decided upon a new revolt.

In their appeal to Serbian national identity and consciousness, the revolutionaries made much reference to myths and stories surrounding the Battle of Kosovo. On the one hand, the Serbian revolution was inspired by the secular model of post-revolutionary France. On the other hand, to generate support for the venture, Serbia's Christian identity was emphasized. This appeal focused on the historic battle that took place at Kosovo on June 15, 1389, when the Turks killed the Serbian Prince Lazar, whom myth represents a Christ-like or Christ-type figure. In later myth, the Muslims become "Christ-killers." Although Lazar had been killed by Turks, converts to Islam in the Balkans were also charged with responsibility for Lazar’s death. By converting, they betrayed both the Christian religion and the Slav race. Sinning doubly, they became race-traitors, guilty of shedding Lazar’s blood and of aiding and abetting the oppression and subjugation of the Balkans for five centuries or so. One issue is how ancient a myth this is. There is evidence that it was propagated in the nineteenth century to coincide with the reassertion of Serbian and Croatian nationalism, although the myth is especially associated with Serbia. Sells says that the "Kosovo myth" was part of a collection of folklore published by the "key figure in the Serb romantic literary movement … Vuk Karadžić (1787-1884)"[8] in the early nineteenth century.[9] The idea that Lazar had been a "Christ figure" and that Muslims were responsible for his death appeared in various "sermons and chronicles" but the full-blown Christ-killer myth "was still not fully realized"[10] until the mid nineteenth century, with Serbian Orthodox Bishop Petar II Petrović (1813-1851), popularly known as Njegoš, playing a key role. In his play, The Mountain Wreath (1847), Muslims become "Turks" due to their conversion; subsequently, many "Serb nationalists and Serb clerics referred to Bosnian Slavic Muslims as Turks, even though all political ties with Turkey ended" after World War I.[11] The play’s hero, a bishop, broods "on the evil of Islam" and "suggests celebrating … Pentecost by cleansing … the land of non Christians," anticipating the ethnic-cleaning of World War II and of the Bosnian War. "From the late 1980s, fully supporting the Greater Serbia goal," Sells comments, "the Serbian Orthodox Church propagated the motif of Muslims as Christ killers and race traitors."[12] 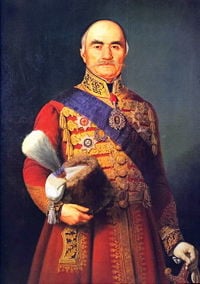 Milos Obrenovic, leader of the Second Serbian Uprising and first Prince of Serbia

The Second Serbian Uprising (1815-1817) was the third phase of the national revolution. The revolutionary council proclaimed an uprising in Takovo on April 23, 1815, with Milos Obrenović chosen as the leader. When the Ottomans discovered this they sentenced all of leaders of the revolt to death. The Serbs fought in battles at Ljubic, Čačak, Palez, Požarevac and Dublje and managed to reconquer the Pashaluk of Belgrade.

Negotiations with the Porte (Ottoman Emperor)

In mid 1815, the first negotiations began between Obrenović and Marashli Ali Pasha, the Ottoman governor. The result was acknowledgment of a Serbian Principality by the Ottoman Empire. Although technically a suzerain of the Porte (to whom a yearly tax tribute was paid), it was, in most respects, an independent state.

By 1817, Obrenović succeeded in forcing Marashli Ali Pasha to negotiate an unwritten agreement, thus ending the Second Serbian uprising. The same year, Karadjordje, the leader of the First Uprising (and Obrenović's rival for the throne) returned to Serbia and was assassinated by Obrenović's orders; Obrenović consequently received the title of Prince of Serbia.

The Convention of Ackerman (1828), the Treaty of Adrianople (1829) and finally, the Hatt-i Sharif (1830), formally recognized the suzerainty of Principality of Serbia with Miloš Obrenović I as its hereditary Prince.