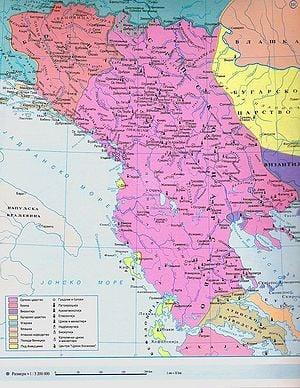 The Serbian Empire was a medieval empire in the Balkans that emerged from the medieval Serbian kingdom in the fourteenth century. The Serbian Empire existed from 1346 to 1371, and was one of the larger states in Europe. By 1389, following the Battle of Kosovo, Serbia was a province of the Ottoman Empire. Serbia was not to enjoy an independent existence until 1878. Following the Serbian revolution of 1804-1817, it was an autonomous principality and officially recognized Ottoman suzerainty. Despite the brevity of the Serbian Empire, many Serbians remembered this period with pride and as a Serbian national consciousness re-awoke in the early nineteenth century, so did the dream of recreating a Greater Serbia.

The Serbian Empire has included areas of Croatia, Bosnia, and Slovenia. The area that later became Yugoslavia was created in 1918, as a union of Serbs, Croats, and Slovenes (Bosnians, but they were not named in the official title, which was the Kingdom of Serbs Croats and Slovens). Following the collapse of Yugoslavia in 1992, the dream of Greater Serbia led to war in the Balkans as some Serbs attempted to unite all Serbs within a Greater Serbia, regardless of where they lived within the Balkan space. Serbian pride in their past helps to redress an imbalance in historical reconstruction that tends to focus on what was happening simultaneously in Western Europe. On one hand, many more texts exist on the history of the imperial projects of the French and Germans, for example, and on their cultural contributions, while many are unaware that Serbia ever had an empire. On the other hand, reference to Serbia's imperial past has been misused by some to justify the recreation of a Greater Serbia that overrides national borders and denies that some non-Serbs have a right to occupy space that once fell within the Serbian Empire. This negative aspect contributed to attempts by some Serbs to deny Bosnia's right to exist during the 1990s' war in the Balkans.

Serbia's strategic location between two continents has subjected it to invasions by many peoples. Belgrade is believed to have been leveled to the ground by 40 different armies in recorded history. Contemporary Serbia comprises the classical regions of Moesia, Pannonia, parts of Dalmatia, Dacia, and Macedonia. Under nominal Serbian rule since the seventh century (having been allowed to settle in Byzantium by its emperor Heraclius after their victory over the Avars), through early history various parts of the territory of modern Serbia have been colonized, claimed or ruled by: The Greeks and Romans (conquered the indigenous Celts and Illyrians); the Western and the Eastern Roman Empires (challenged by the incursions of the Huns, the Ostrogoths, the Gepidae, the Sarmatians, the Avars, the Serbs, the Frankish Kingdom, the Great Moravia, and the Bulgarians). No less than 17 Roman Emperors were born in the land that is now Serbia.

Serbs formed their first unified state under the Vlastimirovic dynasty by 812, at times disrupted by the wars with the the Bulgarians, Ostrogoths and Franks, among others. By the beginning of the fourteenth century Serbs lived in four distinctly independent kingdoms—Dioclea, Rascia, Bosnia, and Syrmia.

At first heavily dependent on the Byzantine Empire as its tributary, in time the most powerful of the Serb states—Raška (Rascia) achieved full independence, overtaking the Kingdom of Duklja, which had previously dominated the Serbian lands between eleventh and twelfth centuries. The center of the Serb world (Raska, Duklja, Travunia, Zahumlje, Pagania, and Bosnia) moved northwards, further from the Adriatic coast. Although fully converted already by 865 C.E., this relocation to the north and east also meant the shift towards the Eastern Orthodox rather than Catholic faith (initially predominant in the south following the East-West Schism).

The Serbian apogee in economy, law, military, and religion took place during the rule of the House of Nemanjić between 1166 and 1371; the Serbian Kingdom was proclaimed in 1217, joined later by the Kingdom of Syrmia, Banovina of Mačva, and Bosnia; finally, the Serbian Empire of Stefan Dušan was formed in 1346.

The founder of the short-lived Serbian Empire, Stefan Dušan, was the eldest son of Stefan Uroš III Dečanski and Theodora of Bulgaria, the daughter of emperor Smilets of Bulgaria. Early in his life he visited Constantinople, where his father had been exiled, and he spent around seven years there (1314–1320). There he learned Greek, gained an understanding of Byzantine life and culture, and got a clear sense of the Byzantine Empire. He himself was more a soldier than a diplomat. In his youth, he fought exceptionally in two battles; in 1329, he defeated the Bosnian ban Stjepan Kotromanić, and in 1330, the Bulgarian emperor Michael Asen III in the Battle of Velbužd.

In part because his father hadn't significantly expanded Serbia after the Battle of Velbužd, he rebelled and overthrew him with the support of the nobility, crowning himself king on September 8, 1331. In 1332, he married Helena of Bulgaria, the sister of the new Bulgarian emperor Ivan Alexander, a woman of strong will, who had a large influence on him and bore him a son, Stefan Uroš V, and two daughters, who died young.

In the first years of his reign, Dušan started to fight against the Byzantine Empire (1334), and warfare continued with interruptions of various duration until his death in 1355. Twice he became involved in larger conflicts with the Hungarians, but these battles were mostly defensive. Both times he defeated the Hungarians. He was at peace with the Bulgarians, who even helped him on several occasions, and he is said to have visited Ivan Alexander at his capital. Dušan exploited the civil war in the Byzantine Empire between regent Anna of Savoy for the minor Emperor John V Palaiologos and his father's general John Kantakouzenos. Dušan and Ivan Alexander picked opposite sides in the conflict but remained at peace with each other, taking advantage of the Byzantine civil war to secure gains for themselves. Dušan's systematic offensive began in 1342, and in the end he conquered all Byzantine territories in the western Balkans as far as Kavala, except for the Peloponnesus and Thessaloniki, which he could not conquer because he had no fleet. There has been speculation that Dušan's ultimate goal was no less than to conquer Constantinople and replace the declining Byzantine Empire with a Greco-Serbian Empire under his control.[1]

After these successes, he proclaimed himself, in 1345, emperor in Serres and was solemnly crowned in Skopje on April 16, 1346, as "Emperor and autocrat of Serbs and Greeks" by the newly created Serbian Patriach Joanikie II with the help of the Bulgarian Patriarch Simeon and the Archbishop of Ohrid, Nicholas. He had previously raised the Serbian Orthodox Church from an autocephalous archbishopric to a patriarchate, and he took over sovereignty on Mt. Athos and the Greek archbishoprics under the rule of the Constantinople Patriarchate (The Ohrid Archbishopric remained autocephalous). For those acts he was anathematized by the Ecumenical Patriarch of Constantinople. 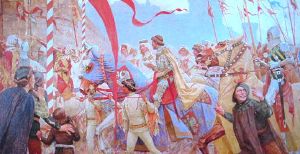 Faced with Dušan's aggression, the Byzantines sought allies in the Turks whom they brought into Europe for the first time. The first conflict between the Serbs and the Turks on Balkan soil, at Stefaniana in 1345, ended unfavorably for the Serbs. In 1348 Dušan conquered Thessaly and Epirus. Dušan eventually saw the danger posed by the Turkish presence in the Balkans and searched for ways to push them back but was interrupted by Hungarians, who attacked Serbia. He heavily defeated the Hungarians and their king Charles I of Hungary, who was wounded by an arrow. Dušan did not organize revenge attacks in Hungary, because he wanted Papal support for his fight against the Ottomans. Later, he fought with the Hungarian protégé ban Stjepan II in Bosnia in 1350, wishing to regain formerly lost Zahumlje.

Dušan had grand intentions, but they were all cut short by his premature death on December 20, 1355, possibly from poisoning by Hungarians who were alarmed at the expansion and rising power of Stefan's Serbia. He was buried in his foundation, the Monastery of the Holy Archangels near Prizren. Today, his remains are in the Church of Saint Mark in Belgrade. He was succeeded by his son Stefan Uroš V, who had been associated in power as king since 1346.

Under Dušan's rule, Serbia reached its territorial peak, becoming one of the larger states in Europe. The renowned Dušan's Code, a universal system of laws, was enforced.

As a result of internal struggle between rival noble families, and heavy losses inflicted by the Ottomans in the epic Battle of Kosovo, the Serbian Empire had dissolved into many statelets by the beginning of the fifteenth century. Throughout the fifteenth and sixteenth centuries, constant struggles between various Serbian kingdoms on one side, and the Ottoman Empire on the other side, took place. The Serbian Despotate fell in 1459 following the siege of the "temporary" capital Smederevo, followed by Bosnia a few years later, and Herzegovina in 1482. Montenegro was overtaken by 1499. Belgrade was the last major Balkan city to endure Ottoman onslaughts, as it joined the Catholic Kingdom of Hungary to resists the Turkish advance. Serbs, Hungarians and European crusaders heavily defeated the Turkish in the Siege of Belgrade of 1456. Several Serbian despots ruled in parts of Vojvodina as vassals of the Hungarian kings with the title of Hungarian barons. After repelling Ottoman attacks for over 70 years, Belgrade finally fell in 1521, alongside the greater part of the Kingdom of Hungary. Conversion to Islam was increased, especially in the southwest (Raška, Kosovo and Bosnia).

Although the Empire was short-lived, it did represent—while it lasted—one of the larger political entities in the European space at the time. When independence from Ottoman rule became a real possibility, inspiring a reawakening of national consciousness in the early nineteenth century, the idea of a restored Greater Serbia found an enthusiastic champion in Russia as well as among some Serbs. The move to unite the Balkan states within what became Yugoslavia was led by the Serbian royal family, in whose hands power within the Kingdom of the Serbs, Croats and Slovenes (established 1918, renamed Yugoslavia in 1929) and by 1931, Yugoslavia was an absolute monarchy. Serbia's history of succeeding to repel Ottoman attacks for over 70 years, too, resulted in some Serbs stressing Serbia's role as a buttress against the Muslim world, increasingly perceived in the European and Western space as a threat following the demise of the "red-menace" after the collapse of the Soviet Union and also following the publication of Samuel P. Huntington's 1993 article on the Clash of the Civilizations.[2] This resurrection of what was once called the "Turkish peril" (the idea that Turkey threatened the stability and security of Europe) corresponded with Turkey's own declared interest in joining the European Union, in which capacity it could be a bridge between Europe and the Muslim world, rather than as a buttress against the latter. Positively, rediscovery of the legacy of the ancient Empire of the Serbs serves to remind the world that European history does not solely consist of empires and of important polities in its Western sphere, such as the Frankish Empire and the Holy Roman Empire and the Austro-Hungarian Empire to name but three. Empires such as that of the Serbs and of the Bulgarians existed in the Eastern European sphere. This helps to correct the notion that while culture, civilization, philosophy, and technology were all progressing in Western Europe, they more or less stood still in the rest of the world.