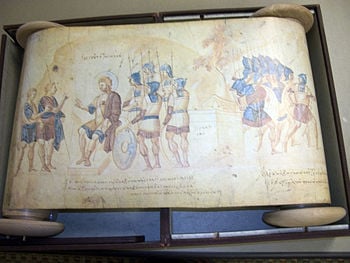 «The Joshua Roll», Vatican Library. An illuminated scroll, probably of the 10th century, created in the Byzantine empire.

A scroll is a roll of papyrus, parchment, or paper which has been written, drawn or painted upon for the purpose of decoration or preserving or transmitting information. It is distinguished from a roll (see below) by virtue of being intended for repeated use rather than the continuous, but once-only use of the roll.

While a scroll is a roll of paper, papyrus, or parchment, a codex is a book made of bound sheets; in a codex, one can directly turn to a specific page. While the scroll was popular until the fourth century, it was gradually replaced by the codex. It is known that Christians preserved papyrus in a codex form during the early part of the second century.

Because the scroll is an ancient publishing method, it is still used today in order to indicate historicity. The Torah in Judaism and scroll hangings in Far Eastern traditions are some examples.

A scroll is usually divided up into pages, which are sometimes separate sheets of papyrus or parchment glued together at the edges, or may be marked divisions of a continuous roll of writing material. The scroll is usually unrolled so that one page is exposed at a time, for writing or reading, with the remaining pages rolled up to the left and right of the visible page. It is unrolled from side to side, and the text is written in lines from the top to the bottom of the page. The letters may be written left to right, right to left, or in alternating directions.

Some scrolls are simply rolled up pages; others may have wooden rollers on each end: Torah scrolls have rather elaborate rollers befitting their ceremonial function.

The greatest usage of scrolls today is in Jewish religious observance at least every week in each Bet Knesset (Synagogue) or Bet Midrash (house of learning).

The Sefer Torah scroll (Hebrew: ספר תורה ; plural: ספרי תורה, Sifrei Torah ; "Book(s) of Torah" or "Torah Scroll(s)") is only opened during actual reading, and covered with bein gavras, the flat, embroidered cover placed over the Torah between Aliyot (those called to the seven Torah readings). When stored, the Sefer Torah is always in an upright position, resting on the lower handles. 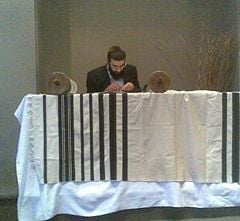 A Sofer finishing the final letters of a Torah scroll

In Jewish practice the Torah scrolls are bound by a special length of usually silk ties or belts with clasps, and in Ashkenazi practice are covered or "dressed" in protective embroidered kippah (mantle), and external ornamental silver Tas (breastplate), and usually a silver Keter (crown) of beaten silver placed over the upper atzei chaim (handles). In Sephardi practice the Keter is built into the portable Aron and the Sefer Torah is never removed from it, the reading conducted with the scroll remaining in the upright position, while that of the Ashkenazi practice is laid on a recliner. These ornaments are not objects of worship, but are used only to beautify the scroll as the sacred and holy living word of God. The reading pointer, or yad, a tool to help the reader keep track of the text without actually touching it, is also stored with the scrolls usually by means of being hung on a chain suspended from the upper handles over the Tas, or over the Aron latch. In Jewish designs the handles with their top and bottom plates are known as atzei chaim (trees of life), and are often highly decorated with silver, and etchings.

The upper handles are decorated with Rimonim (pomegranates) that include bell decorations. The scroll is stored in a cylindrical Aron (case) in the Sephardic practice, and in an often extremely elaborate Aron Kodesh (Hekhál amongst most Sefardim) in Ashkenazi designs, preferably built on the East wall, which takes the shape of a large, often walk-in niche with doors and covered with an elaborately decorated embroidered parokhet (curtain) either inside (Sephardim) or outside (Ashkenazim) the doors. The Parokhet usually includes the name of the congregation and that of its donors.

In Greek and Roman uses, scrolls were mostly used for texts, including scholarly texts, and were stored on open racks upon which scrolls lay flat suspended by the handles, usually uncovered. In a later Early Christian era, scrolls became quite valuable as scribal skills became less common, and were often stored in protected leather cases. Some texts that were declared heretical by the Church, but were retained for study, were secured by special locks.

In general, Christian texts were kept in codex form: That is, books with pages and covers that could be opened to any page. A scroll is a sequential access format; a codex is a random-access format, analogous to tape and disc storage devices in computers.

History of scroll use 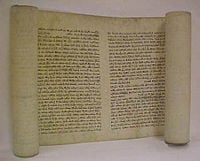 Origins in Europe and West Asia

Parchment scroll used by Israelites after Sinai was the first use of scrolls in the recording of literature before the codex or bound book with pages was invented by the Latins in the first century CE to differentiate their usage from that of the Judeans who were recently conquered. Nevertheless, scrolls were more highly regarded than codices until well into Roman times where they were usually written in single latitudinal column.

In Dynastic Egypt scrolls were made from papyrus. The way a scroll was read by being unrolled meant scribes were sometimes confused; for example, there are versions of the Egyptian Book of the Dead with repeated sections. 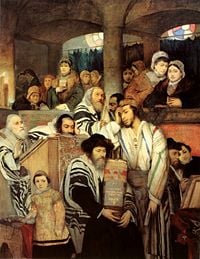 Jews praying in the Synagogue on Yom Kippur (1878 painting by Maurycy Gottlieb).

The Hebrew texts teach that Torah was copied by Moses onto a scroll c.3300 B.C.E. which was made from skin of a kosher animal and not papyrus as in Dynastic Egypt. Since that time the scrolls are copied from one to another due to their extreme survivability, with examples known to be hundreds of years old such as the 800 Year Old Sephardic Sefer Torah from Spain.[1]

The meticulous process of hand-copying a scroll takes about 2,000 hours (a full-time job with a 40 hour work week being 2080 hours a year, ignoring vacations and holidays). Throughout the centuries, Jewish scribes have adhered to the following guidelines:

Other books of the Tanakh are also written in scroll form, as well as the mezuzah scrolls found in most orthodox, conservative and reform Jewish households. Many Jewish families also own their own Megillah scroll for use during Purim.

The Jewish communities residing in these countries used same techniques to manufacture scrolls with the exception of the deer skins being used rather than the calf, lamb or goat skins elsewhere. The scrolls from these areas were known for their quality and durability, and were later imported into European and Indian communities.

Scrolls were used by the ancient Greeks, who borrowed the practice from Israel and Judea. Alexander the Great brought the Library of Solomon from his conquest of Persia, where it was taken when the city was overcome by the Babylonians in 597 B.C.E. These scrolls were used as founding texts of the Library of Alexandria. In Roman usage the scrolls were written latitudinally, usually placed on podiums with roll holders from which the rolls were unwound.

The Romans eventually found the scroll too cumbersome for lengthy works and developed the codex, which evolved into the modern book.

Scrolls continued to be used during the Early Church era until the early Middle Ages era. Owing to the copying practices many errors were introduced into the texts at this time.
The Interpreter’s Dictionary of the Bible, a book written to prove the validity of the New Testament, says: "A study of 150 Greek [manuscripts] of the Gospel of Luke has revealed more than 30,000 different readings… It is safe to say that there is not one sentence in the New Testament in which the [manuscript] is wholly uniform."

Scrolls virtually disappeared in Europe during the Dark Ages, and re-emerged only rarely for use in official treaties and other international documents of great significance during and after the Baroque Era of the seventeenth century. These were usually written on high quality vellum, and stored in elaborate silver and gold cases inscribed with names of participants. Earlier examples were written in Latin.

Scrolls continued in use longer in the Islamic world, often elaborately decorated in calligraphic writing that included use of gold embossing and pigments when used for the writing of the Qur'an. 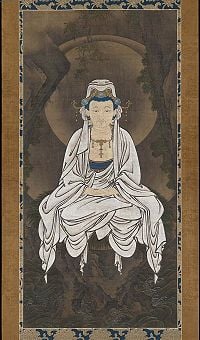 Scrolls continued in use longer in East Asia cultures like China, Japan, and Korea, the oldest dated printed book to survive is a sixteen foot long Chinese Buddhist copy of the Diamond Sutra, dated 868.

The Chinese invented and perfected "Indian Ink" for use in writing, including scrolls. Originally designed for blacking the surfaces of raised stone-carved hieroglyphics, the ink was a mixture of soot from pine smoke and lamp oil mixed with the gelatin of donkey skin and musk. The ink invented by the Chinese philosopher, Tien-Lcheu (2697 B.C.E.), became common by the year 1200 B.C.E.

Later other formats came into use in China, firstly the sutra or scripture binding, a scroll folded concertina-style, which avoids the need to unroll to find a passage in the middle. By about 1,000 C.E., sheet-based formats were introduced, although scrolls continued to have a place. Traditional painting and calligraphy in East Asia is often still performed on relatively short latitudinal paper scrolls displayed vertically as a hanging-scroll on a wall.

Some cultures use scrolls as ceremonial texts or for decoration called a hanging scroll, without any obvious division of the text into columns. In some scroll-using cultures painted illustrations were used as header decorations above the text columns, either in a continuous band or broken into scenes above either a single or double column of text.

Scrolls have experienced a revival in the twentieth century, as they are now used frequently in a virtual rather than a physical sense, in computer application such as word processors, web browsers, and film closing credits. This is known as scrolling.

Scrolls are also used for classroom instruction, where being able to see an entire text, or at least large sections of it, can be beneficial, particularly in use of portable screens for projection of images.

Shorter pieces of parchment or paper are called rolls, which may still be many meters or feet long, were used in the medieval and Early Modern period in Europe and various West Asian cultures for manuscript administrative documents intended for various uses, including accounting, rent-rolls, legal agreements, and inventories. Unlike scrolls, these are usually written down the length of the roll latitudinally. Rolls may be wider than most scrolls, up to perhaps 60 cm or two feet wide. Rolls were often stored together in a special cupboard on shelves.

A special Chinese form of short book, called the "whirlwind book," consists of several pieces of paper bound at the top with bamboo and then rolled up.[2]

Retrieved from https://www.newworldencyclopedia.org/p/index.php?title=Scroll&oldid=1097853
Categories:
Hidden category:
This page was last edited on 25 January 2023, at 17:30.
Content is available under Creative Commons Attribution/Share-Alike License; additional terms may apply. See Terms of Use for details.