Prambanan is the largest Hindu temple compound in Indonesia, and one of the largest Hindu temples in Southeast Asia, located approximately 18 kilometers (11 mi) east of Yogyakarta in Central Java. Characterized by tall and pointed architecture, and by the 47 meters (150 ft) high central building inside a large complex of individual temples, Prambanan exemplifies Hindu temple architecture.[1] UNESCO designated the temple a World Heritage Site in 1991.[2]

Although enormous manpower, talent, and money went into the compound, it had a short life as an active temple. Devotees abandoned the compound shortly after its completion in 850 C.E. After its rediscovery, reconstruction began in 1918 and has been an ongoing project, with the main building completed in 1953. What caused Hindu devotees to abandon Prambanan shortly after completion is a matter of speculation. Typically, Hinduism outside India has been short lived. It may be safe to say that when the dynastic power which installed Hinduism in conquered nations fell or departed, Hinduism also dissipated shortly thereafter, leaving behind magnificent temples as a testament to its presence. That may well have been the case with Prambanan. The ruins of Prambanan during early discovery. Photograph by William Henry Jackson in 1895

Either Rakai Pikatan, king of the second Mataram dynasty, or Balitung Maha Sambu, during the Sanjaya Dynasty, built the temple compound around 850 C.E.[3] Shortly after its construction, Hindu devotes abandoned the temple, leading to its deterioration. Reconstruction of the compound began in 1918, with the main building completed in 1953. Much of the original stone used to build the temples has been removed and reused at remote construction sites. As a rule, the government will sponsor rebuilding a temple if 75 percent of the original stones have been recover. Only the foundation walls of most of the smaller shrines have been reconstructed, with further plans for their reconstruction put on hold.

The earthquake in Java, in 2006, damaged the temple. Early photos suggest that although the complex remained structurally intact, significant damage has been inflicted on the buildings. Large pieces of debris, including carvings, littered the ground. The temple closed to the public at that time. The head of Yogyakarta Archaeological Conservation Agency stated that: "it will take months to identify the precise damage".[4] Some weeks later, in 2006, the site reopened for visitors. The immediate surroundings of the Hindu temples remain off-limits for safety concerns.

The Prambanan temple complex consists of three zones. A large space marked by a rectangular wall (destroyed) marks the outer zone. The original function remains unknown, possibly a sacred park or priests' boarding school (ashram). The supporting buildings for the temple complex had been made of wood that deteriorated over the centuries.

The middle zone consisted of four rows of 224 individual small shrines. Those concentric rows of temples followed identical designs, each row slightly elevated towards the center. Called "Candi Perwara" or complimentary temples, they belong to the main temple complex. Some believe Candi Perwara had been offered to the king as a sign of devotion. The Perwara configure in four rows around the central temples, possibly signifying the four castes, devotees entering according to their rank. Priests alone could access the row nearest to the central compound, while nobles, knights, and common people respectively accessed the other three. Conversely, the four rows of Perwara may have had nothing to do with four castes, simply serving as meditation places for priests and as worship places for devotees. 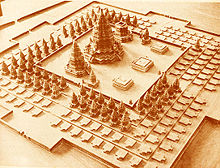 The maquette of the Prambanan temple complex.

The central compound represents the holiest of the three zones. A square stone wall with stone gates on each of the four cardinal points surrounds the square elevated platform. The three main shrines or Trimurti ("three forms") had been dedicated to three gods: Brahma the Creator, Vishnu the Keeper, and Shiva the Destroyer. That holiest compound has eight main shrines or candi. The other three shrines in front of three main temples have been dedicated to Vahana. Between those rows of the main temple, on north and south side, stand two Candi Apit. Beside those eight main temples, eight smaller shrines exist; four Candi Kelir on the four cardinal directions of the entrances, and four Candi Patok on four corners.

The Shiva shrine at the center contains five chambers; four smaller chambers on each cardinal direction and one larger main chamber in central part of the temple. The east chamber connects to central chamber which houses a three meter high statue of Shiva Mahadeva. The statue of Shiva stands on Yoni pedestal that bears the carving of Naga serpents on north side of pedestal. The other three smaller chambers contain statues of Hindu Gods related to Shiva; his consort Durga, the rishi Agastya, and Ganesha, his son. A statue of Agastya occupies the south chamber, the west chamber houses a statue of Ganesha, while the north chamber contains a statue of Durga Mahisasuramardini depicting Durga as the slayer of Bull demon. The shrine of Durga also has been called the temple of Lara Jonggrang (Javanese: Slender virgin), after a Javanese legend of princess Lara Jonggrang. 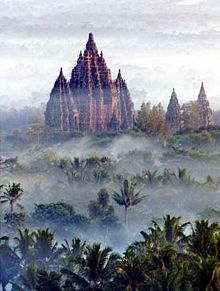 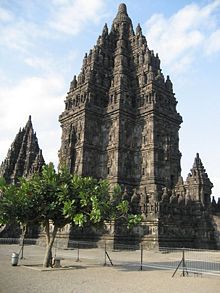 The two other main shrines have been dedicated to Vishnu and Brahma; the shrine on the north side of Shiva shrine has been dedicated to Vishnu and the shrine on the south side to Brahma. Both temples face east, each containing only one large chamber dedicated to their respective gods. In front of each main temple smaller temples stand dedicated to their respective gods: The bull Nandi for Shiva, the gander Angsa for Brahma, and Vishnu's Eagle Garuda. Garuda holds an important place in Indonesia serving as the national symbol of Indonesia.

The bas-reliefs along the balustrades on the gallery around Shiva and Brahma temples depict the Ramayana legend. They illustrate how Ravana abducted Sita, the wife of Rama. The monkey king Hanuman brings his army to help Rama and rescue Sita. The Ramayana Ballet performs this myth regularly on a full moon at Trimurti's illuminated open air theater in Prambanan complex. On the balustrades in Vishnu temple series of bas-reliefs depict the story of lord Krishna.

The popular legend of Lara Jonggrang connects the site of Ratu Boko Palace, the origin of Durga statue in northern cella (chamber) of the main shrine, and the origin of Sewu temple complex nearby. The legend tells the story of how Prince Bandung Bondowoso fell in love with Princess Lara Jonggrang, the daughter of King Boko. But the princess rejected his proposal of marriage because Bandung Bondowoso had killed King Boko and ruled her kingdom. Bandung Bondowoso insisted on the union. Finally, Lara Jonggrang agreed to the union in marriage under duress, but she required one impossible condition: Bandung must build her a thousand temples in just one night.

The Prince entered into meditation and conjured up a multitude of spirits (demons) from the earth. Helped by supernatural beings, he succeed in building 999 temples. With the prince on the verge of success, the princess awoke her palace maids, ordering the women of the village to begin pounding rice. They set a fire in the east of the temple, attempting to make the prince and the spirits believe that dawn had come. As the cocks began to crow, fooled by the light and the sounds of morning, the supernatural helpers fled back into the ground. The prince, furious about the trick, in revenge cursed Lara Jongrang, turning her into a stone. She became the last and the most beautiful of the thousand statues. According to the tradition, the unfinished thousand temples created by the demons became the Sewu temple compounds nearby (Sewu means "thousands" in Javanese). The Princess became the image of Durga in the north cella of the Shiva temple at Prambanan, still known as Lara Jongrang, or Slender Virgin.

Other temples around Prambanan

In addition to the Lara Jongrang complex, Prambanan hosts some of the earliest Buddhist temples in Indonesia.[5] Close by, to the north the ruins of Bubrah temple, Lumbung temple and Sewu temple stand. Further east, Plaosan temple, while to the west Kalasan temple and Sari temple stand. Further to the west, Sambisari temple, and to the south, the Ratu Boko compounds reside on higher ground.

North of the Lara Jongrang complex 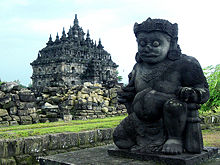 One of the giant guardians, known as Dwarapala, guarding the front of Candi Plaosan, a ninth century Buddhist temple in Klaten, Central Java.

South of the Lara Jongrang complex

West of the Lara Jongrang complex

Retrieved from https://www.newworldencyclopedia.org/p/index.php?title=Prambanan&oldid=1090289
Categories:
Hidden category:
This page was last edited on 30 November 2022, at 22:14.
Content is available under Creative Commons Attribution/Share-Alike License; additional terms may apply. See Terms of Use for details.