The national parks that make up the heritage site are all located on the spine of the Bukit Barisan Mountains, known as the Andes of Sumatra. Offering a magnificent panoramic view, the mountainous and untouched national parks contrast remarkably to the cultivated and developed lowlands of Sumatra. The mixed views from the Bukit Barisan mountain chain of the stunning Lake Gunung Tujuh (the highest lake in Southeast Asia), the splendor of the giant volcano Mount Kerinci, and many small volcanic, coastal and glacial lakes in natural forest settings create an environment of spectacular beauty.

The three national parks host varied habitats and unique biodiversity. They comprise 50 percent of the total plant variety in Sumatra. At least ninety local common species have been recognized in Gunung Leuser National Park. Populations of both the world’s largest flower (Rafflesia arnoldi) and the world's tallest flower (Amorphophallus titanum) are found there. During the twentieth century, this once vast island tropical rainforest was condensed into secluded areas in the space of 50 years. UNESCO designated The Tropical Rainforest Heritage of Sumatra a World Heritage Site for its biodiversity and its lowland and mountain forest. 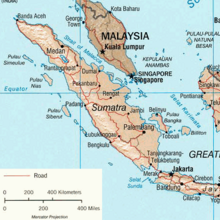 Gunung Leuser National Park numbers among the 18 Indonesian regions classified by the World Wide Fund for Nature (WWF) among the 200 global ecoregions of importance for preservation of the world’s biodiversity.[3] 174 mammals, three endemic and 21 listed as threatened in 2000. Little is known about the smaller mammals. 380 species of birds have been listed, 13 endemic and 52 threatened. Some of the important species include the orangutan, Sumatran rhinoceros, and the pigtailed monkey. Important plants include Rafflesia arnoldi, and the Amorphophallus titanium.[4] Rueck’s blue flycatcher and the white winged duck number among the several important bird species.

Gunung Leuser National Park serves as one of the two remaining habitat for Sumatran Orangutans (Pongo abelii).[5] In 1971, Herman Rijksen established the Ketambe research station, a specially designated research area for the orangutan.[6]

In November 1995, the Langkat Regency government proposed a road to connect an enclave, known as Sapo Padang, inside the park. At that time, 34 families who had been living in the enclave formed a cooperative in March 1996. They submitted a proposal to develop an oil palm plantation in August 1997.[7] In accordance to the government's Poverty Alleviation Program, the authorities accepted the oil palm proposal and the road construction. The project has resulted in deforestation of 42.5 square kilometers (16.4 sq mi) In June 1998, local office of the Forestry Service issued a decree stating that the Sapo Padang enclave was no longer legally a part of the national park; a controversial decision which consequently led to further forest destruction during the road construction and invited newcomers to slash and burn forest area to create local plantations a way deeper to the park.

In 1999, two university-based NGOs filed a legal suit to the Medan State Court, while a group of 61 lawyers brought a parallel case in the National Administrative Court. The National Administrative Court rejected the case, while the local NGOs won with 30 million rupiahs damage in their case.[7] Extensive logging and clearing, road-building and oil palm plantation continued operating inside the national park during and after the court cases.

370 species of birds have been listed including 23 endemic and 58 threatened. The White-winged duck and the Sumatran ground cuckoo number among rare bird species. Over 4000 plant species grow in the park area, including the world's largest flower, Rafflesia arnoldi, and the tallest flower, Titan Arum. Hopea beccariana, Shorea ovalis ssp. seicea number among the rare plants.

Bukit Barisan Selatan National Park is a national park in Sumatra, Indonesia. Starting as a Wildlife Sanctuary in 1935, the area became a National Park in 1982. The park has a total area of 3,568 square kilometers (1,378 sq mi), and spans three provinces:

Bukit Barisan Selatan National Park is 350 kilometers (220 mi) long and 45 kilometers (28 mi) wide on average. The northern two-thirds of the park are mountainous, averaging 1,500 meters (4,900 ft) with the highest point, Mount Pulung standing at 1,964 meters (6,440 ft). Mountains in the southern half stand at a lower altitude. 90 kilometers (56 mi) forms a cape with borders on the sea for half its length. Many of rivers have their source the park. Several lakes and hot springs may be found.

Ninety eight mammals have been recorded in Bukit Barisan Selatan National Park, one endemic and 25 threatened. 379 species of birds, seven endemic and 58 threatened, have been sighted. Fifty nine reptile and amphibian species are recorded.[9] BBSNP has the same bird species as KSNP. Some important mammal species: Sumatran elephant, and the leatherback turtle.

The park is home to many endangered species, including:

The park has recently lost 20 percent of its forests to illegal agriculture, according to the World Wide Fund for Nature. WWF found that more than 450 square kilometers (170 sq mi) of park land is under coffee cultivation, and the organization has been working with multinational coffee companies (including Nestle) to avoid buying illegally grown coffee.[10]

Retrieved from https://www.newworldencyclopedia.org/p/index.php?title=Tropical_Rainforest_Heritage_of_Sumatra&oldid=1085806
Categories:
Hidden category:
This page was last edited on 5 November 2022, at 16:57.
Content is available under Creative Commons Attribution/Share-Alike License; additional terms may apply. See Terms of Use for details.