Philippa of Hainault (June 24, 1311 – August 15, 1369) was the queen consort of Edward III of England. Born in Hainaut, Flanders (today France) she was married to Edward at 16, and they had 14 children, from whom all subsequent English monarchs are descended.

She is remembered as a gentle queen who persuaded her husband to spare the lives of the Burghers of Calais after his victory there in 1346. Yet, as regent during her husband's absence on the Continent, Philippa raised an army and won the battle of Neville's Cross, taking the Scottish King David II Bruce prisoner.

Philippa was known as a kind and loving woman who was loved by her British subjects, and her marriage was a successful one. After her death, however, a violent struggle broke out among her sons and grandsons for the throne of England, which led to the Wars of Roses.

Philippa survived all but five of her children during her 40-year marriage and died at 58 from dropsy. She was buried at Westminster Abbey, and eight years later her husband was laid to rest beside her. The Queen's College, Oxford is named after Philippa.

Philippa was born in Valenciennes in the County of Hinault and was the daughter of William I, Count of Hainaut (d. 1337)[1] and Jeanne of Valois, (d. 1352) the granddaughter of Philip III of France. She was raised in the cultured court of Hainault where she developed literary tastes and an interest in learning. 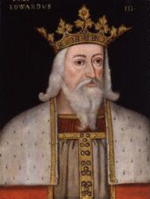 Her marriage to King Edward III of England was arranged by Edward's mother, Isabella of France. They were second cousins who had met previously and enjoyed each other's company. On January 24, 1328, they were married—he was 15 and she was 16—11 months after his accession to the English throne, following the death of his father. However, Edward's mother, Isabella, ruled as regent together with her lover, Roger Mortimer, the real power behind the throne.

Philippa was crowned as queen in 1330 in which year she also gave birth to a son. Unlike many of her predecessors, she did not alienate the English people by retaining her foreign retinue upon her marriage or bringing large numbers of foreigners to the English court.

When Edward was nearly 18, he determined to govern the kingdom without the influence of his domineering mother and her lover Mortimer. He thus staged a coup, exiled his mother up in Castle Rising, and sent Mortimer to the Tower of London, where he was sentenced to die. Edward then began a series of reforms to correct abuses caused by Isabella and Mortimer, engaged in various military campaigns, and encouraged trade with other nations.

Unlike many queens, Philippa accompanied her husband on his military expeditions, for example to the Kingdom of Scotland (1333) and Flanders (1338-40), where she won acclaim for her gentleness and compassion. She is best remembered as the tender-hearted woman who interceded with her husband and persuaded him to spare the lives of the Burghers of Calais (1346) whom he had planned to execute as an example to the townspeople following his successful siege of the city. She reportedly told him such an act would be bad for the baby with which she was currently pregnant.

Philippa was appointed regent of England by Edward when he was absent on the Continent. At this time, the Scots invaded England as far south as Durham in 1346. Philippa raised an army and, challenging the enemy on a white horse, inspired her forces to win the battle of Neville's Cross, taking the Scottish King David II Bruce prisoner.

She also brought Flemish weavers to teach the English the craft, beginning with a little colony at Norwich, often going herself to look after them and encourage their work. She also encouraged coal-mining. She made the French poet and historian Jean Froissart her secretary. It was during the reign of her husband that English became the "official" language in 1363.

Edward and Philippa were reported to have been loving parents, doting on their brood. Philippa breast-fed her children, which was virtually unheard of among the fourteenth-century nobility. The royal couple did not force their eldest son, Edward, into a loveless marriage. Instead, he was allowed to marry for love relatively late in life, to Joan, his second cousin.

Philippa had grown portly in her later years, and this added to the view most of her English subjects had of her as a friendly, homely, motherly woman whom the nation greatly loved. She outlived nine of her 14 children; two of whom were lost during the Black Death outbreak in 1348.

Illustration of the Black Death from the Toggenburg Bible (1411)

Unfortunately, rivalry found its way into the family of Philippa's grown sons and grandsons, which ultimately led to various challenges to the throne and the ensuing Wars of Roses. She did not live to see the sad changes leading up to the struggles which made her son Edward II's life so tragic; nor did she live to see her husband become a helpless old man whose throne became such an object of contention among his sons and grandsons.

"We have, my husband, enjoyed our long union in peace and happiness, but before we are forever parted in this world, I entreat you will grant me three requests." "Lady, name them," answered Edward, "they shall be granted." "My lord," she whispered, "I beg you will pay all the merchants I have engaged for their wares; I beseech you to fulfill any gifts or legacies I have made to churches and my servants; and when it shall please God to call you hence, that you will lie by my side in the cloisters of Westminster Abbey." As she passed, the king was in tears. "Lady," he said, "all this shall be done."[2]

On August 15, 1369, Philippa died of an illness akin to dropsy[3] in Windsor Castle. She was buried at Westminster Abbey. By all accounts, her 40 year marriage to Edward had been happy, despite his taking a mistress, Alice Perrers (a young, successful landowner), during the later part of it.

The Black Prince's shield as heir-apparent

Coin of Edward, the Black Prince

Edmund of Langley, Duke of York

Stephen, King of the English; Duke of the Normans

Oftentimes a royal woman was seen only as a vehicle to produce an heir. Philippa outdid herself becoming literally the foremother of all future English monarchs. She also produced many heirs who married into other royal families of Europe in the fourteenth century.

Philippa and Edward had 14 children, including five sons who lived into adulthood and whose rivalry would eventually bring about the long-running civil wars known as the Wars of the Roses. Their sons are:

Another three sons and two daughters died in infancy. There were four surviving daughters:

Through her children, Philippa also reintroduced the bloodline of an earlier English King, Stephen, into the royal family.

In her husband's absence in the Continent, she was appointed regent and when the Scottish King David Bruce invaded England, Philippa raised an army and, challenging the enemy on a white horse, inspired her forces to win the battle of Neville's Cross, taking him prisoner.

The Queen's College, Oxford is named after Philippa. It was founded by one of her chaplains, Robert de Eglesfield, in her honor and placed under her care and protection.