Matilda of Scotland (c. 1080 – 1 May 1118) was the first wife and queen consort of King Henry I of England. The daughter of Scottish royalty, Matilda also brought to her marriage with Henry the promise of children connected to the old Anglo-Saxon dynasty and thus a union of the British and Norman lines. Their marriage faced a temporary obstacle, however, in that she had been raised in a convent, but a synod of bishops headed by Anselm of Canterbury determined that she had never taken vows as a nun.

A well-educated woman, Matilda brought both religious and cultural improvements to the court and acted as vice-regent when her husband Henry was away from England. She also commissioned the Gesta regum Anglorum of William of Malmsbury, considered to be one of the most important early histories of England.

Matilda gave birth to four children, the two who survived: A daughter, also named Matilda, (1102-1167), and William Adelin, (1103-1120), called the Duke of Normandy. Her daughter Matilda, better known as Empress Maud, married Henry V, Holy Roman Emperor and was ultimately named as Henry II's heir, but was unable to hold the throne during the English civil unrest known as The Anarchy. From Matilda's descendants, the Plantagenet royal line was established when her grandson, Henry II, became king of England.

Matilda was born in Dunfermline (Dùn Phàrlain) on the east coast of Scotland, the daughter of King Malcolm III and the future Saint Margaret. She was named Edith at her christening, where Robert Curthose, the Duke of Normandy and an unsuccessful claimant to the throne of England, stood as her godfather. The English queen Matilda of Flanders, her future mother-in-law, was also present at the ceremony and may have been Matilda's godmother. Matilda had blond hair and blue eyes and was said to be very attractive.

When she was about six years old, Matilda and her sister Mary were sent to Romsey, England, where their aunt Cristina was abbess. In the later years of her stay at Romsey and also at Wilton, Matilda was much sought-after as a bride. She turned down proposals from both William de Warenne, 2nd Earl of Surrey, and Alan Rufus, Lord of Richmond. William II of England may also have considered marrying her. In 1093, while in her early teens Matilda left the abbey for a time, and the future Saint Anselm, Archbishop of Canterbury, grew concerned for her protection, wrote to the bishop of Salisbury to order the daughter of the king of Scotland to be returned to the monastery. 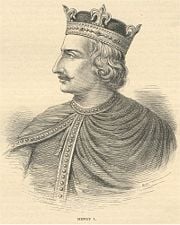 Henry I depicted in Cassell's History of England (1902).

After the death of king William II of England in August 1100, Henry I quickly seized the royal treasury and the crown. His next task was to marry, and his choice fell on Matilda. Because she had spent most of her life in a nunnery, however, there was some controversy over whether or not she had taken vows as a nun and would thus be ineligible for marriage.

Henry sought permission for the marriage from Anselm of Canterbury, who had returned to England in September 1100 after a long exile during William II's reign. Professing himself unwilling to decide so weighty a matter on his own, Anselm called a council of bishops in order to determine the legality of the proposed marriage. Matilda testified to the assembled bishops that she had never taken vows as a nun. She insisted that her parents had sent her and her sister to England only for educational purposes, and that her aunt Cristina had veiled her only to protect her "from the lust of the Normans." Matilda claimed at one point she had even pulled the veil off and stamped on it, and her aunt beat and scolded her most horribly for this. The council concluded that Matilda had never been a nun, nor had her parents intended that she become one, and gave their permission for the marriage.

Matilda and Henry seem to have known one another for some time before their marriage. Twelfth century English historian William of Malmesbury states that Henry had "long been attached" to her, and the chronicler Orderic Vitalis says that Henry had "long adored" her character. Through her mother, Matilda was descended from king Edmund Ironside and thus from Alfred the Great. She was also a great-niece of Edward the Confessor and the old line of the kings of Wessex. The marriage represented a union between the new Norman rulers of England and the old Anglo-Saxon dynasty. This was important, as Henry hoped to make himself more popular with the English people, and in his and Matilda's children, the Norman and Anglo-Saxon dynasties would be united. Another benefit of the marriage was that England and Scotland became politically closer. Three of Matilda's brothers served as kings of Scotland at different times and were known to be unusually friendly to England.

Matilda and Henry were married by Anselm on November 11, 1100 at Westminster Abbey. No longer to be known as Edith, she was crowned "Matilda," a fashionable Norman name. She gave birth to a daughter, also named, Matilda, in February 1102, followed by a son, William, in November 1103. Two other children died in infancy.

As queen, she maintained her court primarily at Westminster, but accompanied her husband in his travels all across England. She is thought to have visited Normandy with her husband in 1106–1107. She was a member of Henry's curia regis (council of tenants-in-chief). She also served in a vice-regal capacity when Henry was away from court until 1118, when her son, William, was old enough to serve in her stead. 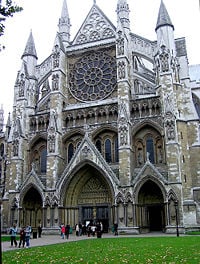 The North entrance of Westminster Abbey

Well educated at the convents of Romsey and Wilton, Matilda increased the quality of literature and culture at court. Her court was filled with musicians and poets. She commissioned a monk, probably Thurgot, to write a biography of her mother. Like her mother, she was renowned for her devotion to religion and the poor. The twelfth century historian William of Malmesbury described her as attending church barefoot at Lent, washing the feet and kissing the hands of the sick. She also administered extensive dower properties and was known as a patron of the arts, especially music.

Matilda wrote many letters, a number of which still exist. The bulk of her surviving correspondence was with Anselm, the ranking ecclesiastic of England. Anselm went back into exile a second time from 1103-06 as a result of a dispute with Henry, during which time Matilda continued to write to him and to plead his case to Pope Paschal II and others.[1] In addition to writing to the pope, she also corresponded with the monk Thurgot of Durham, Bishop Ivo of Chartres, Emperor Henry V, and Bishop Hildebert of Lavardin. Some of their responses also survive. 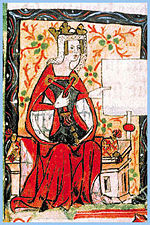 Matilda and Henry's second child was William Adelin, (1103-1120), sometimes called Duke of Normandy. In order to secure the loyalty of Anjou, a long-time rival of Normandy, Matilda and Henry betrothed William to another Matilda of Anjou, eldest daughter of Count Fulk V of Anjou, in February 1113. The marriage finally took place in June 1119 in Lisieux, having been prolonged due to the queen's death. Just a year later, young William died in the White Ship tragedy of November 25, 1120.

Henry failed to produce a legitimate son from his second marriage to Adeliza of Louvain and ultimately designated Maud as his heiress, marrying her to his son's brother-in-law Geoffrey V of Anjou, (Plantagenet) and requiring his barons to swear to uphold her rights. On his death, however, the Barons reneged on their oaths and chose Henry's nephew, Stephen of Blois as king. The ensuring succession crisis in English history is known as The Anarchy.

Matilda's grandson, Henry II Plantagenet finally became king in 1154. He married the powerful, Eleanor of Aquitaine and they had 11 children, two becoming kings of England themselves, Richard the Lionheart, and John I, firmly establishing the Plantagenet royal line.

Queen Matilda commissioned two histories, the life of her mother, Saint Margaret, and an extended history of her family, the Gesta Regum Anglorum, of William of Malmesbury, which was finished after her death and presented to her daughter, Empress Maud.

Matilda was not only an able queen and occasionally vice-regent of England, but also a pious woman who cared for the less fortunate of her realm. When she died at the age of 41, she was buried in Westminster Abbey beside her ancestor, Edward the Confessor. After her death, she was remembered by her subjects as "Matilda the Good Queen" and "Matilda of Blessed Memory." For a time, sainthood was sought for her, although she was never canonized.

From her grandson, Henry II, the Plantagenet royal line was established.