Margaret of Anjou (March 23, 1429 – August 25, 1482) was the French-born Queen consort of Henry VI of England from 1445 to 1471, who led the Lancastrian contingent in the Wars of the Roses. She was the daughter of Rene of Anjou, titular king of Naples and Jerusalem. When her husband, Henry VI, began to suffer from a mental illness, Margaret took the reigns of government and acted in fact, if not in title, as reigning monarch. Her conflicts with the Yorkist branch of the Plantagenets led to their open rebellion and the installment of Edward IV on the throne.

Margaret fought to regain her husband's throne, which she briefly succeeded in doing from late 1470 to early 1471. She was captured after the Lancastrian defeat at the Battle of Tewksbury and released. Broken in spirit, she was imprisoned at both Wallingford Castle and in the Tower of London until ransomed by the French king in 1475. She died on August 25, 1482, in Anjou, where she was buried. 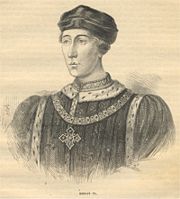 Margaret was born on March 23, 1429. When she was just 14, she was betrothed to Henry VI, and in the following year she journeyed to England to marry him at Titchfield Abbey near Southampton, on April 23, 1445. On May 28, she was welcomed at London with a great pageant, and two days later crowned at Westminster Cathedral.

Margaret's marriage had been negotiated by William de la Pole, Duke of Suffolk, and when she came to England, de la Pole and his wife were her only friends. She thus came under the duke's influence and supported his policies. This, added to her French origin and sympathies, made her unpopular from the start. Though clever and good-looking, she was strong-willed and imperious, lacking the conciliatory manners which her difficult position required. She was in many ways the opposite of her gentle husband, although she shared with him an interest in education, and gave her patronage to the foundation of Queen's College, Cambridge.

Margaret's active engagement in politics began after Suffolk's fall in 1450. She supported Edmond Beaufort, Duke of Somerset, in his opposition to Richard of York. She also concerned herself in the details of government, gaining a reputation for seeking financial benefits for herself and her friends. As a childless queen, however, her influence was limited. Just when, at last, her only son, Edward, was born on the October 13, 1453, her husband was stricken with insanity. From this time on, she became the ardent champion of her husband's and son's rights. It was largely due to her energy that the cause of Lancaster owed its endurance, but her implacable spirit also contributed to its failure.

The red rose of Lancaster

The white rose of York

Henry VI recovered in January 1455, ending the protectorate of the house of York, which Margaret has suffered very unwillingly. Not content with the restoration of Somerset and her other friends to liberty and office, Margaret pushed her politics to extremes. An open military conflict ensued, resulting in the defeat of the Lancastrians at the first Battle of St. Albans, and for a year, Margaret had to acquiesce in York's power. All the while, however, she was organizing her forces. Ultimately, in October 1456, at Coventry, she succeeded in obtaining some of her desired changes in the government. Though formally reconciled to York in March 1458, she continued to intrigue with her partisans in England, and even with friends in France, such as Pierre de Breze, the seneschal of Normandy. 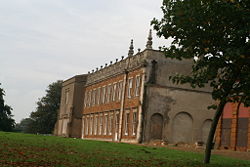 Delapré Abbey, near the site of the second Battle of Northampton, where Henry VI was captured by Yorkist forces

After the Yorkist military failure at Ludlow in 1459, it was Margaret who embittered the struggle by a wholesale outlawing of her opponents in the parliament at Coventry. She was not present with Henry VI at Northampton, where the Yorkists again prevailed and captured the king on July 10, 1460.

After a series of adventures, in which she owed her safety to the loyalty of a boy of 14, she escaped with her little son to Harlech. Margaret later made her way to Scotland, where she obtained the promise of help from Mary of Gelderland. Margaret refused any compromise involving the Duke of York being named Henry's heir and upheld her son's natural claim to the royal succession. She was able to rejoin her friends and was with the northern army which defeated Warwick at the Second Battle of St. Albans on February 17, 1461, which liberated the king from captivity by the Yorkists. The executions of Yorkists which followed are thought to be due at least in part to her influence. After the Battle of Towton in which more than 20,000 lives were reportedly lost, Margaret once more took refuge, along with her husband and son, in Scotland.

A year later, Margaret traveled to France. There, with help from her father and Louis XI, she equipped an expedition to punish the Yorkists under Pierre de Breze. She landed in Northumberland in October, and achieved some slight success; but when on the way to seek further help from Scotland, the fleet was overwhelmed in a storm, and Margaret herself barely escaped in an open boat to Berwick. In the spring, she was again trying to raid Northumberland, meeting with many hardships and adventures. Once, she owed her escape from capture to the generosity of a Yorkist squire, who carried her off on his own horse. Finally, she and her son were brought to Bamburgh through the compassionate help of a robber, whom they had encountered in the forest. In August 1463, she crossed to Sluys in Flanders. Almost destitute, she was courteously treated by Charles the Bold, then the Count of Charolais, and so made her way to her father in France.

For seven years, she lived at Saint-Michel-en-Barrois, educating her son with the help of Sir John Fortescue, who wrote at this time: "We be all in great poverty, but yet the queen sustaineth us in meat and drink. Her highness may do no more than she doth" (Works, ii. 72, ed. Clermont). Meanwhile, Edward IV, the son of Richard of York, had acceded to the throne. Margaret never lost hope in her son's restoration. But when at last the quarrel between Warwick and Edward IV brought her the opportunity, she finally consented to be reconciled to her old and bitter enemy. Warwick's success resulted in Henry's restoration. Margaret remained in France until she was ready to sail, but was delayed by contrary winds. It was only on the very day of Warwick's defeat at Barnet (April 14) that Margaret and her son Edward landed at Weymouth.

Three weeks later, the Lancastrians were defeated at Tewkesbury, and Edward was killed. Margaret was not at the battle; she was captured a few days after, and brought to London on May 21. For five years she remained a prisoner. She was treated honorably and for at least part of the time, and was in the charge of her old friend the Duchess of Suffolk. Finally, Louis XI ransomed her under the Treaty of Pecquigny, and she returned to France on January 29, 1476. Margaret lived for six years in Bar and Anjou, in relative poverty and dependent for a pension on Louis, who made her surrender in return for her claims to her father's inheritance. 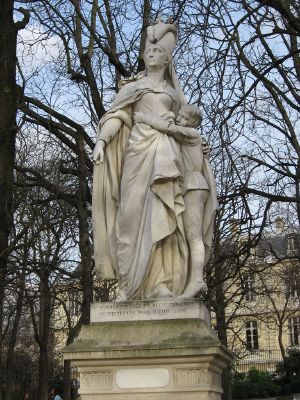 Statue of Margaret and Edward in Luxembourg

Margaret was learned and fierce, a far truer product of the clever and cruel Angevin house than her gentle and scrupulous father, René. She was devoted to hunting as well as to reading and, even in the days of her comparative prosperity, was an importunate beggar of everything which she desired. Her career in England, whose rights and whose fortunes she was ready to sell to anyone who would help her cause, was accompanied by unvarying misfortune for the Lancastrians and, most of all, for her gentle and uncomplaining husband.

However, as the courageous champion of the rights of her son and her husband, Margaret must command a certain sympathy. But she was politically unwise, and injured their cause by her readiness to purchase foreign help at the price of English interests. The French historian, courtier, and diplomat, Philippe de Comines, wrote that Margaret would have done better if she had been more prudent and endeavored to adjust to the disputes of the rival factions, instead of saying "I am of this party, and will maintain it" (Memoires 6. ch. 13).

Her fierce partisanship embittered her enemies, and the Yorkists did not hesitate to allege that her son was a bastard. This, like the scandal concerning Margaret and Suffolk, is baseless. The tradition, however, continued and found expression in the Tudor-period poetry collection, Mirror for Magistrates and in Michael Drayton's Heroical Epistles.

In Shakespeare's Henry VI, she is a particularly memorable character who is not only ruthless, but a greater monarch than either Henry VI or Edward IV. She also has a prophetic, though witch-like, appearance in Richard III, where she predicts the ultimate doom of the House of York. As Shakespeare scholar Janis Lull notes: “Margaret gives voice to the belief, encouraged by the growing Calvinism of the Elizabethan era, that individual historical events are determined by God, who often punishes evil with (apparent) evil” (Lull, 1999, p.6).

Retrieved from https://www.newworldencyclopedia.org/p/index.php?title=Margaret_of_Anjou&oldid=681361
Categories:
Hidden category:
This page was last edited on 2 April 2008, at 11:46.
Content is available under Creative Commons Attribution/Share-Alike License; additional terms may apply. See Terms of Use for details.