Matilda of Flanders (c. 1031 – November 2, 1083) was Queen consort of England and the wife of William I the Conqueror. She and William had 10 or 11 children, two of whom were kings of England: William Rufus (1056–1100) and his successor Henry Beauclerc (1068–1135). She twice acted as regent for William in Normandy while in England and was the first wife of an English king to receive her own coronation.

Matilda was daughter of count Baldwin V of Flanders and Adèle (1000-1078/9), the daughter of Robert II of France. After a notoriously stormy courtship, she and William were thought to have been a peaceful, loving marriage, for the most part. However, their relationship was strained when her eldest son, Robert, opposed his father after a series family squabbles turned into war and William discovered that Matilda had been sending her son money. However, she was able to reconcile father and son, and the couple remained at peace until her death. All sovereigns of England and the United Kingdom since William I are directly descended from her.

For many years Matilda was mistakenly thought to have been responsible for the creation of the famous Bayeux Tapestry.

Matilda was descended on her father's side from King Alfred the Great of England. At 4'2" (127 cm) tall, she would become, according to the Guinness Book of Records, England's smallest queen.

Legend has it that when the emissary of William, Duke of Normandy (later king of England as William the Conqueror), came to ask for her hand in marriage, Matilda considered herself far too high-born to consider marrying him, since he was considered a bastard. (William was the surviving son of the two children of Robert I, duke of Normandy, 1027–35, and his concubine Herleva.) The story goes that when her response was reported to him, William rode from Normandy to Bruges, found Matilda on her way to church, dragged her off her horse by her long braids, threw her down in the street in front of her flabbergasted attendants, and then rode off. Another version relates that William rode to Matilda's father's house in Lille, threw her to the ground in her room (again by the braids), and either hit her or violently shook her before leaving. Naturally her father, Baldwin, took offense at this. However, before they drew swords, Matilda, apparently impressed by his show of passion, settled the matter by deciding to marry William.[1] Even a papal ban by Pope Leo IX (on the grounds of consanguinity) did not dissuade her.

William married Matilda in 1053 in the Cathedral of Notré Dame at Eu, Normandy (Seine-Maritime). William was about 24 years old and Matilda was 22. In repentance for what was considered by the pope a consanguine marriage (they were distant cousins), William and Matilda built and donated matching abbeys to the church. 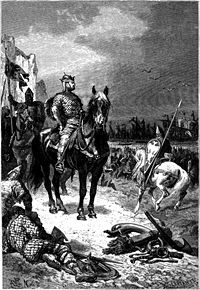 There were rumors that Matilda had previously been in love with the English ambassador to Flanders, a Saxon named Brihtric, who declined her advances, after which she chose to marry William. Whatever the truth of the matter, years later when she was acting as Regent for William in England, she requested and received permission to use her authority to confiscate Brihtric's lands and threw him into prison, where he died.

When William was preparing to invade and conquer on the coast of England, Matilda had secretly outfitted a ship, the Mora, out of her own money as a royal pledge of love and constancy during his absence. It was superbly outfitted with beautifully carved, painted and gilded fittings with a golden figure of their youngest son, William on the bow. This was said to be such a surprise to William and his men that it inspired their efforts for war and eventual victory. 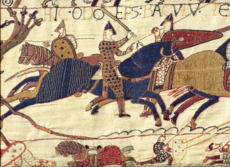 For many years it was thought that she had some involvement in the creation of the Bayeux Tapestry (commonly called La Tapisserie de la Reine Mathilde in French), but historians no longer believe that; it seems to have been commissioned by William's half-brother Odo, Bishop of Bayeux, and made by English artists in Kent to coincide with the building of the Bayeux Cathedral.

Matilda bore William at least ten children, and he was believed to have been faithful to her, although there was rumor of one indiscretion in England to which Matilda reacted strongly. They experienced a good relationship at least up until the time their son Robert rebelled against his father.

When William invaded England, he left Matilda as regent with his young son Robert. Matilda appears to have ruled Normandy with great ability and success during the absence of her husband. Even though the government was weakened by the wealthy and the powerful having gone to support his cause in England, the duchy, under Matilda's regency, experienced neither rebellion or war. She continued to develop the arts and learning, and the culture of Normandy thus became more civilized and refined.

Soon William sent for Matilda to share in his triumph in England. She was accompanied by Gui, Bishop of Amiens, and numerous distinguished nobles. They reached England in the spring of 1068. The king was happy to have her join him, and preparations were made for her coronation. Never before had a queen been crowned alongside a king in England. After her coronation she was always addressed as "Queen Regina." This made her some enemies, as previously queens were addressed by the Saxons only as the kings' ladies or consorts. Henry the Lion and Matilda of England, 1188.

Their youngest son, Henry Beauclerc was born in Selby, in Yorkshire. However, there was difficulties in Normandy and the nobles requested William to send Matilda back. Matilda and their eldest son, Robert, were thus again appointed as regents of Normandy.

During this time the king of France, in alliance with the duke of Brittany, attacked William's continental possessions and encouraged the province of Maine to revolt. Matilda, realizing the danger to Normandy, sent to her husband for help. William was at war with the king of Scotland, but sent the son of Fitz-Osborn, his great supporter, to help the queen. He then made a hasty peace with the Scottish king and traveled to Normandy with a large army. He crushed the rebellion and forced France to sue for peace, bringing stability to Normandy again.

Struggle between father and son

The problem with Robert began when his father returned to Normandy, as William took lands belonging to Robert's deceased fiancé, leaving Robert landless and subject to his father's control. Added to this, one day when two of Robert's brothers poured filthy water on him from a balcony above to humiliate him, William chose not to punish them for the prank. In a more serious vein, Robert's brother William Rufus wanted to replace Robert as inheritor to his father. Eventually, the situation evolved exponentially into a new Norman rebellion. It ended only when King Philip added his military support to William's forces, thus allowing him to confront Robert in battle at Flanders.

During the battle in 1079, Robert unhorsed a man in battle and wounded him. He stopped his attack only when he recognized his father's voice. Realizing how nearly he had come to killing his father, he knelt in repentance to his father and then helped him back on his horse. Humiliated, William cursed his son, then halted the siege and returned to Rouen, after which William revoked Robert's inheritance. 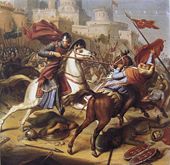 William later discovered Matilda's emissary carrying money to Robert. When he confronted her, she cried and answered that her mother's love could not allow her to abandon her needy son. At Easter 1080, father and son were reunited by the efforts of Matilda, and a truce followed. However, they again quarreled and she fell ill from worry until she died in 1083.

Matilda had been duchess of Normandy for 31 years and queen of England for 17. Her dying prayer was for her favorite son, Robert, who was in England when she passed. After her death at the age of 51, William became more tyrannical, and people blamed it at least in part on his having lost her love and good counsel.

Contrary to the belief that she was buried at St. Stephen's, also called l'Abbaye-aux-Hommes in Caen, Normandy, where William was eventually buried, she is entombed at l'Abbaye aux Dames, which is the Sainte-Trinité church, also in Caen. An eleventh century slab, a sleek black stone decorated with her epitaph, marks her grave at the rear of the church. It is of special note since the grave marker for William was replaced as recently as the beginning of the nineteenth century. Years later, their graves were opened and their bones measured, proving their physical statures. During the French Revolution both of their graves were robbed and their remains spread about, but the monks were able to retrieve the bones carefully back into their caskets.

Some doubt exists over how many daughters there were. This list includes some entries which are obscure.

Gundred, c. 1063–1085, wife of William de Warenne, c. 1055–1088, was formerly thought of as being yet another of Matilda's daughters. However, her lineal connection to either William I of Matilda is now considered without foundation.

Matilda was the first crowned queen of England, as well as capably governing Normandy as regent on two occasions during William's absence. For many years Matilda was credited with the creation of the Bayeux Tapestry, although later scholarship makes this extremely unlikely.

In addition to her successful regency in Normandy while her husband was in England, Matilda's legacy is best seen through her royal lineage and descendants. She was a seventh generation direct descendant of Alfred the Great, and her marriage to William strengthened his claim to the throne. All later sovereigns of England and the United Kingdom are directly descended continuously from her, including Queen Elizabeth II.