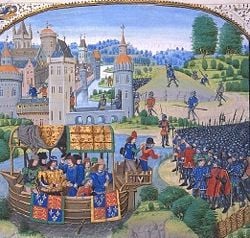 Richard II of England meets rebels, from the Gruuthuse Froissart

Jean Froissart (c.1337 - c.1405) was one of the most important of the chroniclers of Medieval France. For centuries, Froissart's Chronicles have been recognized as the chief expression of the chivalric revival of the fourteenth century Kingdom of England and France. His history is also one of the most important sources for the first half of the Hundred Years' War. Jean Froissart's push to account for the events in fourteenth century French life through his pastorelles, narrative and didactic poems and courtly poetry was his need to educate and involve the French population thereby making an important contribution to society.

Very little is known of Froissart's life and the little that is known comes mainly from Froissart's own Chronicle and his poems. Froissart originated from Valenciennes, County of Hainaut, and his writings suggest his father was a painter of heraldry or armorial bearings. Froissart began working as a merchant but soon gave that up to become a clerk. By about the age 24, he had gained significant distinction with an ecclesiastical tonsure and carried with him a letter of recommendation from the King of Bohemia when he became a court poet and an official historian to Philippa of Hainault, queen consort of Edward III of England. Froissart's historical account to Queen Philippa was a verse account of the battle of Poitiers. The Queen encouraged him to write down his historic chronicles, and the memoirs of his time in Philippa's service, between 1361 and 1369, were later put together with reports of other events he had witnessed, in his Chroniques de France, d'Angleterre, d'Angleterre, d'Ecosse, de Bretagne, de Gascogne, de Flandre et lieux circumvoisins ("Chronicles"). He took a serious approach to his work: Battle of Nicopolis 1398, from the Gruuthuse Froissart

He traveled around England, Scotland, Wales, France, Flanders and Spain gathering material and first hand accounts for his Chronicle. He also went with Lionel of Antwerp (Lionel Duke of Clarence) to Milan to attend the duke's marriage to the daughter of Galeazzo II Visconti. At this wedding two other significant writers of the middle ages were present, Chaucer and Petrarch.

After the publication of this first book, and after the death of Philippa, he enjoyed the patronage of Joanna, Duchess of Brabant among various others. He received rewards—including the benefice of Estinnes, a village near Binche and later became canon of Chimay—which were sufficient to finance further travels, which provided additional material for his work. He returned to England in 1395 but seemed disappointed by the changes since he was last there and what he viewed as the end of chivalry. The date and circumstances of his death are unknown but Saint Monegunda of Chimay claims to be the final resting place for his remains, although this is unverified.

The text of Froissart's Chronicles is preserved in more than 100 illuminated manuscripts, illustrated by a variety of miniaturists. One of the most lavishly illuminated copies was commissioned by Louis of Gruuthuse, a Flemish nobleman, in the 1470s. The four volumes of Froissart of Louis of Gruuthuse (BnF Fr [Bibliotheque Nationale de France catalogue] 2643-6) are a heavily illustrated deluxe illuminated manuscript in four volumes, containing a French text of Froissart's Chronicles. (BnF, Fr 2643); (BnF, Fr 2644); (BnF, Fr 2645); and (BnF, Fr 2646) contain 112 miniatures painted by the best Brugeois artists of the day, among them Loiset Lyédet, to whom the miniatures in the first two volumes are attributed.

Jean Froissart had the ability to put various characters into his poems which added a richness to the text with the doubling of the narrative. In the following poetic example, Froissart has Venus speaking to the narrator who could be Cupid, or a young person in love. Froissart will also identify his poem by putting in his name within the words of the poem as his signature (see words in italics):

Retrieved from https://www.newworldencyclopedia.org/p/index.php?title=Jean_Froissart&oldid=679750
Categories:
Hidden category:
This page was last edited on 2 April 2008, at 07:19.
Content is available under Creative Commons Attribution/Share-Alike License; additional terms may apply. See Terms of Use for details.