The Bibliothèque nationale de France (BnF) is the National Library of France, located in Paris. It is intended to be the repository of all that is published in France. The Library was originated from the royal library by Charles V in 1368, opened to the public in 1692, and became the first free public library in the world in 1793.

The Library holds over ten million books, three hundred fifty thousands manuscripts as well as a large number of maps, coins, and others. All works published in France are deposited to the Library by law established in 1537. The Library also maintains Gallica, a digital library established in 1997.

France is known for its cultural contributions to the world. In 1980s, François Mitterrand, twenty first President of France, initiated a national cultural project which included a renewal of the Library, renovation of Musée du Louvre, and construction of L’Opéra de la Bastille. The construction of a new library building was completed in 1994. The Library is one of the best libraries for medieval, modern, and contemporary European literature in the world.

The National Library of France traces its origin to the royal library founded at the Louvre by Charles V in 1368. It expanded under Louis XIV and became open to the public in 1692. The library's collections swelled to over 300,000 volumes during the radical phase of the French Revolution when the private libraries of aristocrats and clergy were seized. By an act of the revolutionary French National Convention, the Library became the first free public library in the world in 1793.

Following the series of regime changes in France, it became the Imperial National Library and in 1868 was moved to newly constructed buildings on the rue de Richelieu designed by Henri Labrouste.

On July 14, 1988, President François Mitterrand announced the construction and the expansion of one of the largest and most modern libraries in the world, intended to cover all fields of knowledge, and designed to be accessible to all. Using the most modern data transfer technologies, which could be consulted from a distance, and which would collaborate with other European libraries. In July 1989, the services of the architectural firm of Dominique Perrault were retained. The construction was carried out by Bouygues. After the move of the major collections from the rue de Richelieu, the National Library of France opened to the public on December 20, 1996. It contains more than ten million volumes.

The library retains the use of the rue de Richelieu complex for some of its collections.

The National Library of France is a public establishment under the supervision of the Ministry of Culture. Its mission is to constitute collections, especially the copies of works published in France that must, by law, be deposited, conserved on site, and made available to the public. It produces a reference catalog, cooperates with other national and international establishments, and participates in research programs.

The library holds about 5,000 Greek manuscripts, which are divided into three fonds: Fonds grec, fonds Coislin, and supplément grec.

The collections of the library originated with the private library of Marc-René, 3rd marquis d'Argenson (1722–1787), installed in 1757 in the residence of the Grand Master of the Artillery, at the heart of the ancient Arsenal of Paris. The Arsenal itself was founded by King François I in the sixteenth century, later rebuilt by Sully, and expanded by the architect Gabriel Germain Boffrand in the eighteenth century. Paulmy had assembled a magnificent collection, particularly rich in medieval manuscripts and prints. In 1786, he also acquired the collection of the duc de la Vallière, but then sold the entire library to the comte d'Artois.

The library was sequestered by the state during the French Revolution, and was greatly expanded by many valuable items seized from the abbeys of Paris and also by the archives of the Bastille. On April 28, 1797, it was declared a public library.

In 1824, the writer Charles Nodier became librarian and held in the Arsenal some of the most reputable literary salons of the day. In the 19th century the collections became increasingly focused towards literature, especially drama. Between 1880 and 1914 the library acquired a copy of every periodical published in Paris. In 1934 it became a department of the Bibliothèque nationale.

The library today holds approximately one million volumes (including 150,000 pre-1880 volumes), just over 12,000 manuscripts, 100,000 prints, and 3,000 charts and plans. Its collecting policy concentrates on French literature from the sixteenth century to the nineteenth century, publications connected with the archives and manuscript collections (fonds) already held, bibliophilia, the history of the book and bookbinding, and the history of the Arsenal itself and its occupants.

The library is also rich in occult documents. These include the original manuscripts of The Sacred Magic of Abra-Melin and the Book of the Penitence of Adam. 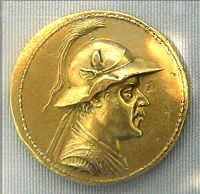 Gold 20-stater of Eucratides I

(175–150 B.C.E.), the largest gold coin known to have been minted in Antiquity. The coin weighs 169.2 grams, and has a diameter of 58 millimeters. It was originally found in Bukhara, and later acquired by Napoleon III. Cabinet des Médailles, Paris.]]

The Cabinet des Médailles is a museum presenting numerous coin collections and antiquities, with its distant origins in the treasuries of the French kings of the Middle Ages. The disruptions of the Wars of Religion inspired Charles IX to create the position of a garde particulier des médailles et antiques du roi a "guardian entrusted specifically with the medals and ancient coins and antiquities of the Crown." Thus the collection, which has been augmented and never again dispersed (the first royal library, assembled at the Palais du Louvre by Charles V, which contained 973 volumes when it was inventoried in 1373, was dispersed during the following century), passed from being the personal collection of the king to becoming a national property—a bien national—as the royal collection was declared during the Revolution. A stage in this aspect of its development was the bequest of the collection of pioneering archeologist comte de Caylus, who knew that in this fashion his antiquities would be most accessible to scholars. Other collectors followed suit: when the duc de Luynes gave his collection of Greek coins to the Cabinet Impérial in 1862, it was a national collection rather than simply an Imperial one he was enriching. The State also added to the treasury contained in the Cabinet des Médailles: A notable addition, in 1846, was the early sixth century gold Treasure of Gourdon.

The Cabinet—a term which in French implies a small private room for the conservation and display of intimate works of art and for private conversations, rather than a piece of furniture— took a stable shape under Henri IV, who nominated connoisseur Rascas de Bagarris garde particulier des médailles et antiques du roi, the "particular guardian of the medals and antiquities of the King." 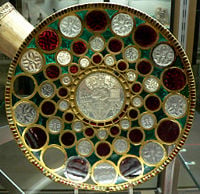 The Sassanian "Cup of Chosroes," from Saint-Denis, where it was treasured as "King Solomon's Cup"

Among the antiquarians and scholars who have had the charge of the Cabinet des Médailles, one of the most outstanding was Théophile Marion Dumersan (1780-1849), who began working there in 1795 at the age of sixteen, protected the collection from dispersal by the allies after Napoleon's defeat, and published at his own expense a history of the collection and description, as newly-rearranged according to historical principles, in 1838[2]

Earlier printed catalogs of parts of the collection had been published. Pierre-Jean Mariette, urged by the comte de Caylus, published a selection of the royal carved hardstones as volume II of his Traité des pierres gravées (Paris, 1750).

Louis XIV of France, an acquisitive connoisseur, brought together the cabinet de curiosités of his uncle Gaston d'Orléans and acquired that of Hippolyte de Béthune, the nephew of Henri IV's minister Sully. In order to keep the collections closer at hand, he removed them from the old royal library in Paris to Versailles.

When Louis' great-grandson Louis XV had attained majority, the Cabinet was returned to Paris in 1724, to take up its present space in the royal library that was designed under the direction of Jules-Robert de Cotte, the son of Mansart's successor at the Bâtiments du Roi. In the Cabinet des Médailles, the medal-cabinet delivered in 1739 by the ébéniste du roi Antoine Gaudreau figures among the greatest pieces of French furniture. Other medal cabinets were delivered for Louis XIV by André-Charles Boulle. The cabinet also still houses its paintings by Boucher, Natoire, and Van Loo.

The Cabinet des Médailles is considered the oldest museum in France. It is located in the former building of the Bibliothèque Nationale, 58 rue Richelieu, Paris I, and can be visited for free every afternoon (13:00-17:00), seven days a week.

Retrieved from https://www.newworldencyclopedia.org/p/index.php?title=Bibliothèque_nationale_de_France&oldid=1063353
Categories:
This page was last edited on 21 January 2022, at 16:34.
Content is available under Creative Commons Attribution/Share-Alike License; additional terms may apply. See Terms of Use for details.