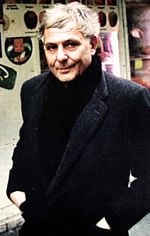 Philippe Sollers (born Philippe Joyaux November 28, 1936, Bordeaux, France) is a French writer and critic. In 1960 he founded the avant garde journal Tel Quel (along with the writer and art critic Marcelin Pleynet), published by Seuil, which ran until 1982. In 1982 Sollers then created the journal L'Infini published by Denoel which was later published under the same title by Gallimard for whom Sollers also directs the series.

Sollers was at the heart of the intense period of intellectual unrest in the Paris of the 1960s and 1970s. Among others, he was a friend of Jacques Lacan, Louis Althusser and Roland Barthes. These three characters are described in his novel, Femmes (1983) alongside a number of other figures of the French intellectual movement before and after May 1968. From A Strange Solitude, The Park and Event, through "Logiques," Lois and Paradis, down to Watteau in Venice, Une vie divine and "La Guerre du goût," the writings of Sollers have often provided contestation, provocation and challenge.

A successful novelist, he is nonetheless best known for his association with Tel Quel, which adopted a Maoist line and had close ties with the French Communist Party. When Maoism fell into disrepute, Sollers steered the journal into other alliances and interests, including with the Nouveaux Philosophes and even theology.

Sollers was born as Philippe Joyaux on November 28, 1936 in Talence, near Bordeaux, France. He was the youngest child of Octave Joyaux, an atheist and a bourgeois owner of a factory that had been in the family since the mid-nineteenth century. Soller's mother was a Parisien and Catholic. He was raised with two older sisters. Philippe's youth was somewhat isolated as he suffered from asthma ear problems. After numerous ear operations, he developed an aural facility. In his isolated state "[h]e developed an affinity for Rabelais, became a prolific reader, learned Italian and Spanish, displayed a passion for spoken languages, and identified with Marcel Proust as a person and a writer."[1]

Philippe was educated by Jesuits in Versailles, from whom he learned to question authority and to respect method. As a teenager, he adopted the nom de plume, Philippe Sollers, in his writing workbooks. Sollers married Julia Kristeva in 1967. They have one son.

After his first novel A Strange Solitude (1958), hailed by François Mauriac and Louis Aragon, Sollers began, with The Park (1961) the experiments in narrative form that would lead to Event (Drame, 1965) and Nombres (1968). Jacques Derrida analyzes these novels in his book Dissemination. Sollers then appears to have attempted to counter the high seriousness of Nombres by producing in Lois (1972) a greater linguistic vitality through the use of wordplay and a less formal style, among other techniques. The direction taken by Lois was developed through the heightened rhythmic intensity of the unpunctuated texts such as Paradis (1981). Sollers's other novels include Women (1983), Portrait du joueur (1984), Le coeur absolu (1986), Watteau in Venice (1991), Studio (1997), Passion fixe (2000), L'étoile des amants (2002), which have all introduced a degree of realism to his fiction to the extent that they make more recognizable use of plot, character and thematic development. They offer the reader a clear fictional study of the society in which he or she lives by reinterpreting among other things the role of politics, media, sex, religion, and the arts.

In all these novels Sollers's interest in Chinese civilization plays an important part. From the late 1960s until then, he studied Chinese and employed ideograms increasingly in his writings. He especially exemplifies this view in the subtitle of Lois, a Chinese ideogram representing both "France" and "Law"

There is a musical quality to his writing even more striking than the references to the other arts. Vocalization or his preference for the spoken word has always been a priority for Sollers in his writing. The combination of music, voice and theater is especially found in opera. The kind of opera associated with Sollers should properly be called opera bouffe because of that sense of humor and love of irony: opera bouffe is a farcical type of opera from which the genius of Mozart sprang. In many ways Sollers is doing the work of the opera bouffe or drama giocoso with his novels since Women (1983). Since Lois, the writing is music: the references to the latter are innumerable. In Women already: "Whoever understands nothing about music, understands nothing about metaphysics."

The focus on the spoken language is one which also draws Sollers toward James Joyce. Sollers is so fascinated by Joyce's style that he and Stephen Heath have collaborated to translate Joyce's Finnegans Wake into French. In January 1975, Sollers gave a lecture to an international symposium on Joyce claiming Finnegans Wake as "the most formidable anti-fascist book produced between the two wars." However, Joyce is much more than poetry for Sollers. Both educated by Jesuits, Joyce and Sollers have strong ties to Catholicism. As Sollers indicated in Paradis, Joycean Christianity like Sollers' Catholicism participates in the comic and the pathetic.

The novel Paradis has a particular flavor because the narrator is similar to a troubadour singing the story of postmodern times. The self appears to disappear as word games, puns, neologisms and misspellings create a text that is hallucinatory and humorous in its juxtaposition of seemingly incongruous words and phrases. There are constant references to orchestration and symphony, thus suggesting that there is an innate structure to what appears, at first glance to be a chaotic text.

The text's life is much like the sexuality of the writer. There is a rhythm, very much like radar or sonar, according to which the text responds to its need to enjoy itself and also to reproduce itself. The physical drives and desires of the human body lead it toward variations of paradise.

Sollers was one of the founding members of the journal and the only remaining member after several years. He became the driving force and developed a reputation as something of an enfant terrible. Tel Quel ("as is") (published from 1960 to 1983) was an avant garde journal with a reputation for iconoclasm. After the reign of Jean-Paul Sartre and Existentialism, Sollers promoted the Nouveau Roman of Alain Robbe-Grillet and Maurice Blanchot, among others.

In the middle 1960s Tel Quel focused on the linguistic and philosophical implications of writing (écriture). Influenced by Russian Formalism, it was at the vanguard of the creation of literary critical theory which transcended generic and disciplinary boundaries, paving the way for the rise of Jacques Derrida and deconstruction, and subsequently Jacques Lacan and Louis Althusser. The importance of psychoanalysis and Marxism for Tel Quel is evident in the collective Théorie d'ensemble (1968), which contains a number of the most significant Tel Quel texts of this period.

While psychoanalysis played an important theoretical role, from 1967 Tel Quel embraced Marxism, particularly Maoism and sought to both create a revolution in literature and the larger society as well. In this regard it was the logical successor of Surrealism, which had eventually foundered on the Marxist commitments of Andre Breton. Tel Quel saw itself as the cultural arm of the French Communist Party, especially around the time of the events of May 1968. When the revolution did not materialize, the Sollers led the journal away from Marxism, befriending the Nouveaux Philosophes, such as Bernard-Henri Levy and even turned to theology.

Most of Soller's work has not been translated into English. They are popular in France and among academics who speak French. His novels Femmes (1983) and Portrait de joueur (1984) have achieved a certain popularity. The first was translated into English as Women by Barbara Bray and published by Columbia University Press (1990). Philip Roth's comment on the cover of Women says that Sollers is a "master of good-natured malice, a kind of happy, lively, benign Céline."

One of the reason for the popularity of these books by Sollers is the sense of humor that he exhibits with his narrating voice about the culture in which the voice thrives.

In his writing, Sollers has a place of predilection, a place that unites together the whole of his personal pantheon: Venice, Da Ponte, Vivaldi, Tiepolo, Tintoretto, Tiziano, Veronese, Monteverdi... and then Casanova "the man whose name is synonymous with Venice," Vivant Denon and the Countess Albrizzi... Intimate experiences, expression, erudition, Sollers reveals the splendors of the Serenissima in a very personal Dictionnaire amoureux de Venise (2004).

In 2000, Sollers published Passion fixe, a tender and moving love story, undoubtedly the most intimate written by the author, at once immoral and moral.

In 2006, he published Une vie divine. The narrator, a professor of philosophy, was entrusted with the task of reflecting upon a world philosophy that would not exclude the religious dimension of humanity. Throughout his research and discussions with the two women in his life (one intellectual and the other frivolous) he discovers that only one thinker is strong enough to found a project of world philosophy: Nietzsche. In this novel, Philippe Sollers rises against contemporary nihilism – literature in deadlock, misfortune and melancholy – to which he contrasts promises of life and happiness. A political book and philosophical novel, Une vie divine is serious and humorous writing on the possibility of being happy. Nietzsche versus Schopenhauer. Praises of joy versus sadness and ambient defeatism.

Sollers also sees himself and his novels in an eighteenth-century lineage with philosophes like Diderot and Voltaire; so his break with tradition is not all-encompassing.

In his book Writer Sollers, Roland Barthes discusses the work of Phillippe Sollers and the meaning of language.

Retrieved from https://www.newworldencyclopedia.org/p/index.php?title=Philippe_Sollers&oldid=1022795
Categories:
Hidden category:
This page was last edited on 3 August 2019, at 16:34.
Content is available under Creative Commons Attribution/Share-Alike License; additional terms may apply. See Terms of Use for details.