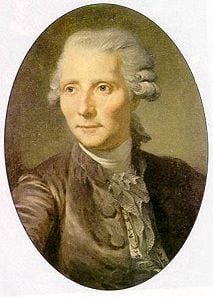 Lorenzo Da Ponte, born Emanuele Conegliano (March 10, 1749 – August 17, 1838) was an Italian librettist and poet born in Ceneda (now Vittorio Veneto). Appointed a professor at what is now Columbia University in 1826, he was the first faculty member to have been born Jewish and ordained as a Roman Catholic priest. The Lorenzo Da Ponte Italian Library at the University of California at Los Angeles has named in his memory. His books formed the basis of the Italian collection at Columbia, the Library of Congress, and the New York Public Library. He is most famous for having written the librettos to three of Mozart's operas, Le nozze di Figaro, Don Giovanni, and Così fan tutte. Many of his works belonged to the Opera buffa genre. Scandal and debt dogged his checkered career and his work was largely forgotten until a revival of interest on the eve of the 250th anniversary of Mozart's birth. During the Third Reich in Adolf Hitler's Germany, when Mozart was considered an icon of German art, the Jewish background of his librettist was downplayed.

Conegliano was a Jew by birth. When he, his father, and siblings converted to Roman Catholicism in 1763, he took the name Lorenzo Da Ponte, the name of the bishop of Ceneda who administered the baptism. Still later, he studied to be a teacher and was ordained a Catholic priest in 1773, after training at the seminary at Portogruaro. He had excelled as a student, developing a particular interest in Dante Alighieri and in classical Greek and Roman literature. However, scandal resulted in a ban on his teaching and as a priest, and in 1799, he was exiled from Venice.

In addition to having an adulterous relationship, he had expressed doubts about Catholic dogma. He was also renowned for drinking and gambling. He may never really have embraced Christianity with any deep conviction. His father converted in order to marry a Christian woman (his first wife died in 1754). At this time, it was not uncommon for some Jews to convert because of the promise or possibility of social advancement. Leaving Venice, Da Ponte tried to find work in Dresden but failed, then in 1781, moved to Vienna, where he later collaborated with Mozart and Antonio Salieri. In 1780, he was appointed court librettist to Joseph II, for whom he composed libretti in many different languages, including French, German, and Italian. While in Vienna, he also worked with composers Vicente Martín y Soler and Antonio Salieri. It was in Vienna that he met Wolfgang Amadeus Mozart and began the collaboration for which he famous. His libretti, Le nozze di Figaro, Don Giovanni, and Così fan tutte, appeared in 1786, 1787, and 1790. During 1788, financial problems at the Viennese court due to the cost of the war with the Ottoman Empire resulted in the closure of several theaters. By 1790, when Joseph II died, Da Ponte's own position was threatened and in 1792, he was dismissed. Once again, scandal appears to have led to his loss of favor. He was even accused of plotting against Joseph's successor, Leopold II. That year, he married Celestina Ernestina Grahl (known as Nancy), who died on December 12, 1831. Their daughter, Luisa, married a Columbia professor and prominent Catholic philanthropist.

Migration to the United States

Moving to Paris in 1791, he went to London the following year, where he worked at the King's Theatre, taught Italian, and was employed as a bookseller. During 1800, he was imprisoned for his debts. In 1805, fleeing creditors, he migrated with Nancy and their daughter, Luisa (born 1794), to the United States. He briefly ran a grocery store in Philadelphia and gave private Italian lessons before returning to New York to open a bookstore. At one point, he may have played organ at St. Patrick's Old Cathedral. He became friends with Clement Clarke Moore, the supposed author of Twas the Night Before Christmas, and through him gained an appointment as the first Professor of Italian Literature at Columbia College (now known as Columbia University). He was the first faculty member to have been born a Jew, and also the first to have been ordained as a Roman Catholic priest. This was, however, an unsalaried position although he could charge fees for teaching. In 1828, at the age of 79, da Ponte became a naturalized citizen of the United States.[1] He was not very successful at Columbia, failing to interest his students in his native language. His attempt to establish an Opera company in New York also floundered. He is credited with being the first person to teach Dante in the United States. Donating his books to several libraries, some 26,000 of these formed the basis of the Italian collections at Columbia, the Library of Congress, and the New York Public Library.[2]

Da Ponte died in 1838. Another distinction shared by him with Mozart is the fact his place of burial is unmarked. Da Ponte was originally buried in a Catholic cemetery in Manhattan, near Old Saint Patrick's Cathedral. These interments were later removed to Calvary Cemetery in Queens, with little attention paid to who was who. A cenotaph to Da Ponte's memory is found at Calvary.

All but two of Da Ponte's works are adaptations of preexisting plots, as was common among librettists of the time. Le nozze di Figaro, for example, is based on a play by Pierre Beaumarchais, as is Axur re d’Ormus, which Da Ponte wrote for Salieri. The minor exception is L'arbore di Diana; the great exception was Così fan tutte, an original work which he began with Salieri but completed with Mozart. Da Ponte's considerable musical legacy is less well known today than in his lifetime. This may be because his work is viewed as derivative. Certainly, he did not create his plots. However, he was brilliant at creating poetry and at giving new life to old material into which he skillfully wove comedy alongside tragedy. His Memoirs suggest that he saw his somewhat erratic career as the result of victimization by people he regarded as his enemies. However, it has also been described as "valuable" for "its portrait of early nineteenth century America."[3] During the Third Reich, when Mozart was "re-invented as a German artist," the "Jewish origins of his librettist were deliberately obscured."[4] The Lorenzo Da Ponte Library at UCLA is named for him. According to Holden (2006), Da Ponte "charmed" everyone he met and although his marriage lasted almost three decades, until his wife's death, his reputation as a womanizer lasted even longer.[5]