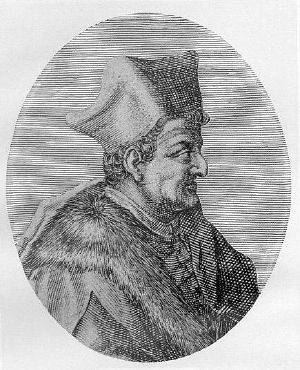 Lorenzo (or Laurentius) Valla (c. 1406 - August 1, 1457) was an Italian humanist, rhetorician, classical scholar, reformer, and educator. He was a spokesman for the humanist desire to reform language and education. His extensive knowledge of Latin and Greek equipped him to conduct careful analysis of certain venerated church documents and dispel the myths surrounding them. He demonstrated that the Donation of Constantine, often cited in support of the temporal power of the Papacy, was a forgery.

Believing that Aristotle had corrupted logic and diverted philosophy from its proper use, he challenged the Aristotelian Scholastics with a number of debates and criticisms. His aim was to open up new currents of thought, rather than to construct a philosophical system of his own. His treatise, De voluptate (1431), voiced Epicurean and Christian hedonist ideas that the desire for happiness is the motivating factor behind human action. He also held that free will is compatible with God’s foreknowledge of events, but concluded that this concept was beyond the grasp of human intellect and was therefore a matter of faith. Valla gave expression to many ideas that were further developed by other Reformation thinkers.

His outspoken criticisms provoked many enemies and endangered his life several times. His Latin scholarship eventually gained him a position at the Vatican; this has been called a "triumph of humanism over orthodoxy and tradition."

Lorenzo Valla was born in Rome, Italy, around 1406. His father, Luca della Valla, was a lawyer from Piacenza. Lorenzo was educated in Rome, studying Latin under the eminent professor, Leonardo Bruni (Aretino), and Greek under Giovanni Aurispa. He also attended the University of Padua. In 1428, he sought a position with the papal diplomatic corps, but was turned down because he was too young. In 1429, he accepted a position teaching rhetoric at Padua, and in 1431, he entered the priesthood. His treatise, De voluptate was published in 1431; an emended edition, De Vero Bono, appeared later. In 1433, Valla was compelled to resign his professorship after publishing an open letter attacking the jurist Bartolo and mocking the scholastic system of jurisprudence.

Valla went to Milan and Genoa, tried again to a get a position in Rome, and finally made his way to Naples, and the court of Alfonso V of Aragon, which was frequented by the most prominent writers and known for its debauchery. Alfonso made Valla his private Latin secretary and defended him against the attacks of his numerous enemies. On one occasion, in 1444, Valla was summoned before the Inquisition because he made a public statement denying that the Apostles' Creed was composed in succession by each of the twelve Apostles. Alfonso eventually succeeded in having these charges dropped.

In 1439, during the pontificate of Eugene IV, Alfonso of Aragon became involved in a territorial conflict with the Papal States over the possession of Naples. Valla wrote an essay, De falso credita et ementita Constantini donatione declamation, showing that the Donation of Constantine, often cited in support of the temporal power of the Papacy, was a forgery. In the essay, Valla urged the Romans to rebel and their leaders to strip the pope of his temporal power, which he blamed for all the evils then troubling Italy. The essay, published in 1440, demonstrated conclusively that the document known as the Constitutum Constantini could not possibly have been written during the time of the Roman Empire. Valla's argument was so convincing that the falsity of the Donation was generally conceded.

In Naples, Valla continued his philological work and showed that the supposed letter of Christ to Abgarus was a forgery. He aroused the anger of the faithful by throwing doubt upon the authenticity of other spurious documents, and by questioning the utility of monastic life. His narrow escape from the inquisitory tribunal in 1444, did not silence him; he ridiculed the Latin of the Vulgate and accused St. Augustine of heresy. In 1444, De elegantia linguae latinae, the first scientific study of Latin, was published with the assistance of Aurispa. Most literary writers considered this work a provocation and hurled invectives against the author. The fiercest aggressor was Poggio Bracciolini, who not only pointed out errors of style in Valla's works, but accused him of the most degrading vices. Valla's no less virulent answers are collected in his Invectivarum libri sex. Poggio's invectives created a bad impression of Valla in Rome. Still hoping to obtain a position in the Curia, Valla wrote an Apologia ad Eugenio IV, excusing himself for his faults and promising to improve. In 1444, he visited Rome, but his enemies there were numerous and powerful, and he only saved his life by fleeing in disguise to Barcelona, and returning to Naples.

After the death of Eugene IV in February 1447, Valla again journeyed to Rome, where he was welcomed by the new pope, Nicholas V, who made him a scriptor and then an apostolic secretary and ordered him to translate the works of various Greek authors, including Herodotus and Thucydides, into Latin. This acceptance of Valla into the Roman Curia has been called a "triumph of humanism over orthodoxy and tradition." The next pope, Calixtus III, bestowed on him a canonry in St. John Lateran, which he held until his death, in 1457.

Lorenzo Valla is remembered less as a scholar and stylist than as one who initiated a bold method of criticism. He combined the qualities of an elegant humanist, an acute critic, and a venomous writer. His works were aimed at opening up new avenues of thought, rather than supporting any philosophical system. He applied his extensive knowledge of Latin and Greek to a careful examination of the New Testament and other religious documents which were used by the church in support of its doctrines. In doing so he brought a new dimension of scholarship to the humanist movement. Valla gave expression to many ideas that were further developed by Reformation thinkers. Luther had a very high opinion of Valla and of his writings, and Cardinal Bellarmine calls him praecursor Lutheri.

Lorenzo Valla’s most famous work is De elegantia linguae latinae, a scientific study of Latin, which was reprinted nearly sixty times between 1471 and 1536. De voluptate, published in 1431, was an eloquent examination of Stoic, Epicurean, and hedonistic ethics. De libero arbitrio discussed the concept of free will. Dialecticae disputations strongly opposes Aristotle and the Scholastics, more on the grounds of their use (or misuse) of language than of their philosophical tenets. Declamazione contro la donazione di Constantino (1440), exposed the Constantine Donation as a forgery. De professione religiosorum (1442), was a criticism of the monastic lifestyle. Invectivarum libri sex (1444) was written in response to the vicious accusations of Poggio Bracciolini. The Annotazioni sul testo latino del Nuovo Testamento discussed the Latin used in the New Testament. Apologia ad Eugenio IV was an attempt to pacify the Vatican by tempering some of Valla’s previous statements. Collected, but not quite complete, editions of Valla's works were published at Basel in 1540, and at Venice in 1592.

Valla’s De Voluptate is written in three books, as a dialogue among Leonardo Bruni (Arentino), Antonio Beccadelli (Panormita), and Niccolo Niccoli, concerning the concept of the greatest good. Arentino defends the Stoic idea that a life in conformity with nature is the summum bonum. Panormita supports Epicureanism, saying that self-restraint is against nature and that the desire for pleasure should only be restricted when it interferes with the realization of an even higher pleasure. Niccoli opposes both of them by promoting Christian hedonism, which holds that the greatest good is eternal happiness, and that virtue should only be practiced as a way of achieving it. Niccoli is pronounced the winner of the debate, but Panormita presents his arguments eloquently and it is not clear which opinion is supported by Valla himself. The work was an aggressive criticism of scholasticism and of monastic asceticism, and it provoked a hostile response. This open declaration of sympathy with those who claimed the right of free indulgence for one's natural desires was the first deliberate philosophical expression of Renaissance humanism. In his later Apologia ad Eugenio IV, Valla tempered the vehemence of his statements in De Voluptate by giving a different interpretation of the Latin word voluptas.

In De professione religiosorum, Vallas argued that there is greater merit in acting spontaneously than in fulfilling what one is obliged to do by religious vows. He accused the monks of being arrogant by calling themselves religious, as though other Christians were not religious.

In the De libero arbitrio he concluded that the concept of free will is compatible with God’s foreknowledge of events, but maintains that human intellect was not able to comprehend this.

Starting late in the fourteenth century, humanists began to study the texts of classical antiquity, in an effort to revive the spirit of Greco-Roman times. Valla’s masterwork, the six books of the Elegantiae linguae latinae (1444), subjected the forms of Latin grammar and the rules of Latin style and rhetoric to a critical examination, and placed Latin composition upon a foundation of analysis and inductive reasoning. It contrasted the elegant Latin of ancient Roman authors, such as Cicero and Quintilian, with the clumsiness of medieval and church Latin. Elegantiae linguae latinae initiated a movement to purge humanistic Latin of post-Classical words and features, so that it became very different stylistically from the Christian Latin of the European Middle Ages, which was used as a learned, but still living, language by lawyers, physicians, and diplomats. It was published sixty times during the following century and became a standard text for the study of Latin.

Many of Valla’s contemporary literary writers, who used popular Latin in their works, perceived Elegantiae as a personal criticism, though Valla had not mentioned any of their names in his books, and responded with virulent attacks.

Through the careful study of Latin, Lorenzo Valla was able to prove conclusively that certain historical documents, used to justify church dogma, were forgeries. Annotazioni sul testo latino del Nuovo Testamento, a commentary on the philology of the New Testament, concentrated more on the use of Latin than the meaning of the texts.

Erasmus stated in his De ratione studii that for Latin Grammar, there was "no better guide than Lorenzo Valla." Valla's exposure of textual errors in the Vulgate inspired Erasmus to study the Greek New Testament.

Retrieved from https://www.newworldencyclopedia.org/p/index.php?title=Lorenzo_Valla&oldid=1085434
Categories:
This page was last edited on 4 November 2022, at 02:43.
Content is available under Creative Commons Attribution/Share-Alike License; additional terms may apply. See Terms of Use for details.