The Parliament Acts have been used to pass legislation against the wishes of the House of Lords on only seven occasions since 1911, including the passing of the Parliament Act 1949. Some constitutional lawyers had questioned the validity of the 1949 Act; these doubts were settled in 2005 when members of the Countryside Alliance unsuccessfully challenged the validity of the Hunting Act 2004, which had been passed under the auspices of the Act. In October 2005, the House of Lords dismissed the Alliance's appeal against this decision, with an unusually large panel of nine Law Lords holding that the 1949 Act was a valid Act of Parliament. 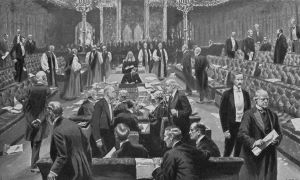 Passing of the Parliament Bill, 1911, from the drawing by S. Begg

The purpose of the Parliament Act 1911 is explained by its long title: 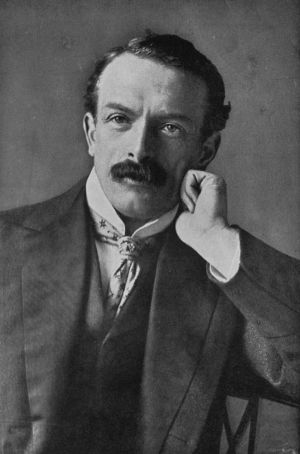 The 1911 Act was a reaction to the clash between the Liberal government and the House of Lords, culminating in the so-called "People's Budget" of 1909. In this Budget, the Chancellor of the Exchequer David Lloyd George proposed the introduction of a land tax based on the ideas of the American tax reformer Henry George.[5] This new tax would have had a major effect on large landowners, and was opposed by the Conservative opposition, many of whom were large landowners themselves. The Conservatives believed that money should be raised through the introduction of tariffs on imports, which they claimed would help British industry. Contrary to British constitutional convention, the Conservatives used their large majority in the Lords to vote down the Budget, but the Liberals built on the wide-spread unpopularity of the Lords to make reducing the power of the Lords an important issue of the January 1910 general election.[6]

The Liberals returned in a hung parliament after the election:[7] their call for action against the Lords had energized believers in hereditary principle to vote for the Conservatives, but had failed to generate much interest with the rest of the voting public. The Liberals formed a minority government with the support of the Labour and Irish nationalist MPs. The Lords subsequently accepted the Budget when the land tax proposal was dropped. However, as a result of the dispute over the Budget, the new government introduced resolutions (that would later form the Parliament Bill) to limit the power of the Lords.[8] The Prime Minister, Herbert Henry Asquith, asked Edward VII to create sufficient new Liberal peers to pass the Bill if the Lords rejected it. The King assented, provided that Asquith went back to the polls to obtain an explicit mandate for the constitutional change.

The Lords voted this 1910 Bill down, so Asquith called a second general election in December 1910, and again formed a minority government. Edward VII had died in May 1910, but George V agreed that, if necessary, he would create hundreds of new Liberal peers to neutralize the Conservative majority in the Lords.[9] The Conservative Lords then backed down, and on 10 August 1911, the House of Lords passed the Parliament Act by a narrow 131–114 vote,[10] with the support of some two dozen Conservative peers and eleven of thirteen Lords Spiritual (who normally do not vote).

The Parliament Act was intended as a temporary measure. The preamble states:

whereas it is intended to substitute for the House of Lords as it at present exists a Second Chamber constituted on a popular instead of hereditary basis, but such substitution cannot be immediately brought into operation.[11]

One of the reasons for the Irish MPs' support for the Parliament Act, and the bitterness of the Unionist resistance, was that the loss of the Lords' veto would make possible Irish Home Rule (i.e. a devolved assembly, similar to those in place in Scotland and Wales since 1997 and in Northern Ireland technically since 2000, but in reality only since May 8, 2007). The previous Liberal government's attempt to initiate Irish Home Rule had been vetoed by the House of Lords in 1893: at the time of his retirement in 1894, William Gladstone had not attracted sufficient support from his colleagues for a battle with the House of Lords.

The 1911 Act prevented the Lords from vetoing any public legislation that originated in and had been approved by the Commons, and imposed a maximum legislative delay of one month for "money bills" (those dealing with taxation) and two years for other types of bill.[1] The Speaker was given the power to certify which bills are classified as money bills. If a money bill is not passed by the Lords without amendment within one month after it is received, the bill can be presented for Royal Assent without being passed by the Lords. For other public bills, the 1911 Act originally provided that a rejected bill would become law without the Lords' consent if it were passed by the Commons in three successive sessions, provided that two years elapsed between Second Reading of the bill and its final passing in the Commons.

The 1911 Act still allowed the Lords to veto a bill to prolong the lifetime of a parliament and it could only be used to force through a bill originating in the Commons, so the Lords also retained the power to veto any bill originating within the House of Lords. In addition to curtailing the power of the Lords, the 1911 Act amended the Septennial Act 1715, reducing the maximum duration of any parliament from seven years to five, and provided for Members of Parliament (excluding government ministers) to be paid £400 per year.[12]

Immediately after the Second World War, the Labour government of Clement Attlee decided to amend the 1911 Act to reduce further the power of the Lords, as a result of their fears that their radical programme of nationalization would be delayed by the Lords and hence would not be completed within the life of the parliament.[2] The House of Lords did not interfere with nationalizations in 1945 or 1946, but it was feared that the proposed nationalization of the iron and steel industry would be a bridge too far,[13] so a bill was introduced in 1947 to reduce the time that the Lords could delay bills, from three sessions over two years to two sessions over one year.[1] The Lords attempted to block this change. The Bill was reintroduced in 1948 and again in 1949, before the 1911 Act was finally used to force it through.[14] Since the 1911 Act required a delay over three "sessions," a special short "session" of parliament was introduced in 1948, with a King's Speech on 14 September 1948, and prorogation on October 25.[1]

The amended Parliament Act was never used in the 1940s or 1950s, possibly because the mere threat of it was enough. The Salisbury convention that the Lords would not block government bills that were mentioned in the government's manifesto dates from this time. Salisbury believed that since, in being returned to power, the Government was given a clear mandate for the policies proposed in its manifesto, it would be improper for the Lords to frustrate such legislation.[15]

Acts passed under the Parliament Act display a modified form of enacting formula:

BE IT ENACTED by The Queen's most Excellent Majesty, by and with the advice and consent of the Commons in this present Parliament assembled, in accordance with the provisions of the Parliament Acts 1911 and 1949, and by the authority of the same, as follows

The usual enacting formula, used on other Acts, also refers to the advice and consent of the Lords Spiritual and Temporal, and omits the reference to the Parliament Acts.

Use of the Parliament Acts

The Parliament Acts have seldom been used. The 1911 Act was used only three times before its amendment in 1949.[1] These were:

After Tony Blair's Labour government came to power in 1997, there was repeated speculation that the government would rely on the Parliament Acts to reverse a check from the Lords, but it did not proved necessary. The Parliament Acts were not required to enact, for example, the Criminal Justice (Mode of Trial) (No 2) Bill in 2000[1] (which originally proposed to give magistrates, not defendants, the choice of where an "either way" offense would be tried) because the government abandoned the bill after a wrecking amendment in the House of Lords. The Parliament Acts cannot be used to force through legislation that originated in the House of Lords, so they could not have been used to enact the Civil Partnerships Act 2004 or the Constitutional Reform Act 2005.

The first three measures for which the act has been used since 1949 were not mentioned in manifestos, and hence in trying to veto them the Lords were not breaking the Salisbury convention. The Hunting Bill was mentioned in the Labour Party manifesto for the 2001 general election, so, depending upon how the convention is interpreted, the attempt to block it could be taken as a breach.

To address these concerns, a Law Lord, Lord Donaldson of Lymington, presented a Private Member's Bill in House of Lords in the 2000–2001 session of Parliament (the Parliament Acts (Amendment) Bill), which would have had the effect of confirming the legitimacy of the 1949 Act, but prohibiting any further such uses of the Parliament Act to amend itself, or use of it to further modify or curtail the powers of the House of Lords.[1][2][17] Another Parliament Acts (Amendment) Bill was introduced independently by Lord Renton of Mount Harry in the next session,[2] but neither of these Bills proceeded to a Third Reading.[1]

The 1949 Act, and the validity of Acts made under it, were not questioned in court again until the Parliament Acts were used to pass the Hunting Act 2004. Early in 2005, the Countryside Alliance took a case to court to challenge the validity of the 1949 Act.[19] In the High Court, the wording of the 1911 Act was held not to imply any entrenchment.[14] Support for this conclusion can be drawn from the parliamentary debates on the 1911 Act, in which an entrenchment clause was considered but rejected, the Government clearly displaying the intention to be able to make such amendments if necessary. However, the 2005 decision was made on other grounds, so the question of whether the Courts could refer to the 1949 Act's Parliamentary debates under the principle established in Pepper v Hart was not decided.[14]

The subsequent Court of Appeal ruling agreed that the 1949 Act itself was valid, but left open the question of whether the Commons could use the Parliament Act to make significant changes to the constitution (for example, repealing the Parliament Act's provision prohibiting the Act from being used to extend the lifespan of Parliament).[20] The Court of Appeal refused to give the Countryside Alliance permission to appeal their decision to the House of Lords; however, a petition for permission to appeal was submitted directly to the Law Lords and granted in July 2005. Argument in the case was heard on 13 and 14 July 2005 by a large committee of nine Law Lords, rather than the normal five. In a unanimous decision, the Law Lords upheld the validity of 1949 Act.[21]

In March 2006, it was reported that the Government is considering removing the ability of the Lords to delay legislation that arises as a result of manifesto commitments, and reducing their ability to delay other legislation to a period of 60 days.[22]

Retrieved from https://www.newworldencyclopedia.org/p/index.php?title=Parliament_Acts&oldid=987036
Categories:
Hidden category:
This page was last edited on 25 March 2015, at 15:30.
Content is available under Creative Commons Attribution/Share-Alike License; additional terms may apply. See Terms of Use for details.