The Pan American Highway from Prudhoe Bay in the U.S. state of Alaska to Ushuaia, Argentina. The route through the United States has not been officially designated, and several interstate highway systems are variously claimed as part of the system.

The Pan-American Highway forms part of a network of highways known as the Pan American Highway System stretching from the extreme north to the extreme south of the Americas. It traverses 15 nations and has important spurs into five additional nations. Except for a break of about 100 km (62 statute miles) in an area of rainforest separating Panama and Colombia known as the Darién Gap, the road links the mainland nations of the Americas in a connected highway system. The idea of the highway came from the Fifth International Conference of American States in 1923. In 1925, the Pan American Highway Congress was formed to coordinate and ensure progress of the system. The congress meets every four years.

The first section of the highway through Mexico was completed in 1950. The construction of the remaining sections, supported largely with U.S. aid, was opened to through traffic in 1963. The Pan-American Highway passes through every imaginable climate and ecological zone, from dense jungles to cold mountain passes. Each country has jurisdiction to designate, maintain, and build that section of the highway within its borders. As such, far from being uniform, the highways within the system reflect the various nations and the variety of cultures and landscapes they traverse. 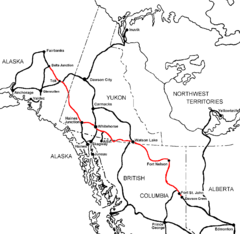 Map of the Alaska Highway portion (in red) of the Pan-American Highway system.

The concept of a route from one tip of the Americas to the other was originally proposed at the First Pan-American Conference in 1889 as a railroad; however, nothing came of this proposal. The idea re-emerged at the Fifth International Conference of American States in 1923, where the Pan American Highway was originally conceived as a single route. The first Pan-American highway conference convened October 5, 1925, in Buenos Aires. Mexico was the first Latin American country to complete its portion of the highway, in 1950.

The Pan American Highway is not one single highway nor is there one centrally administered road-building program. It is instead a system of roads that often follow long-established routes. Each country has jurisdiction to designate, maintain, or build the section of the highway flowing within its borders. There is a coordinating body, the Pan American Highway Congress, which meets once every four years.

The Pan-American Highway travels through 15 countries:

For tourism purposes, the Pan-American Highway north of Central America is sometimes assumed to use the Alaska Highway and then run down the west coast of Canada and the United States, running east from San Diego, California, and picking up the branch to Nogales, Arizona.

The Darién Gap is a large swath of undeveloped swampland and forest separating Panama (Central America) and Colombia (South America). It measures just over 160 km (100 miles) long and about 50 km (30 miles) wide. It is not possible to cross between South and Central America by land without passing through the Darién Gap. Road-building through this area is expensive, and the environmental toll is steep. Political consensus in favor of road construction has not emerged. There is no existing road connection through the Darién Gap connecting North/Central America with South America. It is, therefore, the only missing link of the Pan-American Highway.

There are many people, groups, indigenous populations, and governments that are opposed to completing the Darién Gap portion of the highway, with reasons as varied as the desire to protect the rain forest, containing the spread of tropical diseases, protecting the livelihood of indigenous peoples in the area, and preventing foot and mouth disease from entering North America. Experience with the extension as far as Yaviza included severe deforestation within a decade alongside the highway route.

One option proposed, in a study by Bio-Pacifico, is a short ferry link from Colombia to a new ferry port in Panama, with an extension of the existing Panama highway that would complete the highway without violating these environmental concerns. The ferry would cross the Gulf of Urabá from Turbo, Colombia, to a new Panamanian port (possibly Carreto) connected to a Caribbean coast extension of the highway. Efficient routing would probably dictate that the existing route to Yaviza be relegated to secondary road status.

Northern section of the Pan-American Highway 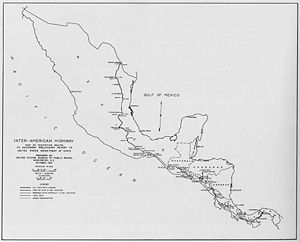 No road in the U.S. or Canada has been officially designated as the Pan-American Highway, and thus the primary road officially starts at the U.S.-Mexico border. The original route began at the border at Nuevo Laredo, Tamaulipas (opposite Laredo, Texas), and went south through Mexico City. Later branches were built to the border at Nogales, Sonora (Nogales, Arizona), Ciudad Juárez, Chihuahua (El Paso, Texas), Piedras Negras, Coahuila (Eagle Pass, Texas), Reynosa, Tamaulipas (Pharr, Texas), and Matamoros, Tamaulipas (Brownsville, Texas).

On the other hand, several roads in the U.S. were locally named after the Pan-American Highway. When the section of Interstate 35 in San Antonio, Texas, was built, it was considered an extension of the original route from Laredo and named the "Pan Am Expressway." Interstate 25 in Albuquerque, New Mexico, an extension of the route to El Paso, was named the "Pan-American Freeway." U.S. Route 85, which goes north from El Paso, is designated the "CanAm Highway" and which continues into Canada in the province of Saskatchewan, before terminating at La Ronge. The CANAMEX Corridor is also similarly designated throughout the western United States, and continuing into the Canadian province of Alberta.

From Mexico City to the border with Guatemala, the Highway follows Mexican Federal Highway 190. Through the Central American countries, it follows Central American Highway 1, ending at Yaviza, Panama at the edge of the Darién Gap. The road had formerly ended at Cañita, Panama, 110 miles (178 km) north of its current end. United States government funding was particularly significant to complete a high-level bridge over the Panama Canal, during the years when the canal was administered by the United States.

Southern section of the Pan-American Highway

A Vía PanAm shield sign is sometimes found on routes in South American countries associated with the Pan-American Highway. 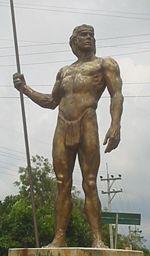 Sculpture of an Indian man standing at the entrance of Fusagasugá, Colombia over the PanAm Highway.

Ecuador Highway 35 runs the whole length of that country. Peru Highway 1 carries the Pan-American Highway all the way through Peru to the border with Chile.

In Chile, the highway follows Chile Highway 5 south to a point north of Santiago, where the highway splits into two parts, one of which goes through Chilean territory to Quellón on Chiloé Island, after which it continues as the Carretera Austral. The other section goes east along Chile Highway 60, which becomes Argentina National Route 7 at the Argentinian border and continues to Buenos Aires, the end of the main highway. The highway network also continues south of Buenos Aires along Argentina National Route 3 towards the city of Ushuaia and Cape Horn.

One branch, known as the Simón Bolívar Highway, runs from Bogotá (Colombia) to Guiria (Venezuela). It begins by using Colombia Highway 71 all the way to the border with Venezuela. From there it uses Venezuela Highway 1 to Caracas and Venezuela Highway 9 to its end at Guiria.

The highway does not have official segments to Belize, Guyana, Suriname and French Guiana. However, highways from Venezuela link to the Brazilian Trans-Amazonian highway that provide a southwest entrance to Guyana, route to the coast, and follow a coastal route through Suriname to French Guiana. Belize, at one time anticipating joining the route, switched which side of the road they drive on to conform with the highway standards. As British Honduras, they had been the only Central American country to drive on the left side of the road.