The Oslo Accords, officially called the Declaration of Principles on Interim Self-Government Arrangements or Declaration of Principles (DOP), were finalized in Oslo, Norway on August 20, 1993, and subsequently officially signed at a public ceremony in Washington, DC on September 13, 1993, with Yasser Arafat signing for the Palestine Liberation Organization and Shimon Peres signing for the State of Israel. It was witnessed by Secretary of State, Warren Christopher for the United States and Foreign Minister Andrei Kozyrev for Russia, in the presence of U.S. President Bill Clinton and Israel's Prime Minister Yitzhak Rabin with the PLO's Chairman Yasser Arafat.

The Oslo Accords were a culmination of a series of secret and public agreements, dating particularly from the Madrid Conference of 1991 onwards, and negotiated between the Israeli government and the Palestine Liberation Organization (acting as representatives of the Palestinian people) in 1993 as part of a peace process trying to resolve the Israeli-Palestinian conflict.

Despite the high hopes expressed in the Accords and in the subsequent agreements, which also promised the normalization of Israel's relations with the Arab world, the Accords have not been fully implemented and the conflict has not been resolved.

The talks leading to the agreement were initially held in London, were planned to be held in Zagreb, then later moved to Oslo. Main architects behind the plan were Johan Jørgen Holst (the Norwegian Minister of Foreign Affairs), Terje Rød-Larsen and Mona Juul. The negotiations were reportedly conducted in total secrecy.

Principles of the Accords

In essence, the accords call for the withdrawal of Israeli forces from parts of the Gaza Strip and West Bank and affirm the Palestinian right to self-government within those areas through the creation of the Palestinian Authority. Palestinian rule would last for a five year interim period during which a permanent agreement would be negotiated (beginning not later than May 1996). Permanent issues such as Jerusalem, refugees, Israeli settlements in the area, security and borders were deliberately excluded from the Accords and left to be decided. The interim self-government was to be granted in phases.

Until a final status accord was established, West Bank and Gaza would be divided into three zones:

Together with the principles the two groups signed Letters of Mutual Recognition — The Israeli government recognized the PLO as the legitimate representative of the Palestinian people while the PLO recognized the right of the state of Israel to exist and renounced terrorism, violence and its desire for the destruction of Israel.

The aim of Israeli-Palestinian negotiations was to establish a Palestinian Interim Self-Government Authority, an elected Council, for the Palestinian people in the West Bank and the Gaza Strip, for a transitional period not exceeding five years, leading to a permanent settlement based on United Nations General Assembly Resolution 242 and Resolution 338, an integral part of the whole peace process.

In order that the Palestinians should govern themselves according to democratic principles, free and general political elections would be held for the Council.

The five-year transitional period would begin with the withdrawal from the Gaza Strip and Jericho area. Permanent status negotiations would commence as soon as possible between Israel and the Palestinians. The negotiations should cover remaining issues, including: Jerusalem, refugees, settlements, security arrangements, borders, relations and cooperation with other neighbors, and other issues of common interest.

There would be a transfer of authority from the IDF to the authorized Palestinians, concerning education and culture, health, social welfare, direct taxation, and tourism.

The Council would establish a strong police force, while Israel will continue to carry the responsibility for defending against external threats.

An Israeli-Palestinian Economic Cooperation Committee would be established in order to develop and implement in a cooperative manner the programs identified in the protocols.

A redeployment of Israeli military forces in the West Bank and the Gaza Strip would take place.

Annexes of the accords

Election agreements, system of elections, rules and regulations regarding election campaign, including agreed arrangements for the organizing of mass media, and the possibility of licensing a broadcasting and TV station. (Source: Reference.com)

The above agreement includes, among other things:

The two sides agree to establish an Israeli-Palestinian continuing Committee for economic cooperation, focusing, among other things, on the following:

The two sides will cooperate in the context of the multilateral peace efforts in promoting a Development Program for the region, including the West Bank and the Gaza Strip, to be initiated by the G-7.

Agreed minutes of the accords

Any powers and responsibilities transferred to the Palestinians through the Declaration of Principles prior to the inauguration of the Council will be subject to the same principles pertaining to Article IV, as set out in the agreed minutes below.

It was to be understood that: Jurisdiction of the Council would cover West Bank and Gaza Strip territory, except for issues that would be negotiated in the permanent status negotiations.

It was agreed that the transfer of authority would be as follows: The Palestinians would inform the Israelis of the names of the authorized Palestinians who would assume the powers, authorities and responsibilities that would be transferred to the Palestinians according to the Declaration of Principles in the following fields: education and culture, health, social welfare, direct taxation, tourism, and any other authorities agreed upon.

The Interim Agreement would also include arrangements for coordination and cooperation.

The withdrawal of the military government would not prevent Israel from exercising the powers and responsibilities not transferred to the Council.

It was understood that the Interim Agreement would include arrangements for cooperation and coordination. It was also agreed that the transfer of powers and responsibilities to the Palestinian police would be accomplished in a phased manner.

It was agreed that the Israeli and Palestinian delegations would exchange the names of the individuals designated by them as members of the Joint Israeli-Palestinian Liaison Committee which would reach decisions by agreement.

It was understood that, subsequent to the Israeli withdrawal, Israel would continue to be responsible for external security, and for internal security and public order of settlements and Israelis. Israeli military forces and civilians would be allowed to continue using roads freely within the Gaza Strip and the Jericho area.

The acceptance of the accords by both parties 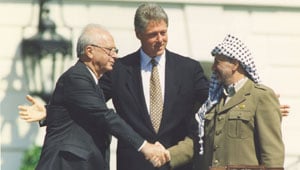 Yitzhak Rabin, Bill Clinton, and Yasser Arafat during the Oslo Accords on September 13, 1993.

In Israel, a strong debate over the accords took place; the left wing supported them, while the right wing opposed them. After a two day discussion in the Knesset on the government proclamation in the issue of the accord and the exchange of the letters, on September 23, 1993 a vote of confidence was held in which 61 Knesset members voted for the decision, 50 voted against and 8 abstained.

The Palestinian reactions to the accords were not homogeneous, either. The Fatah accepted the accords, but Hamas, the Palestinian Islamic Jihad and the Popular Front for the Liberation of Palestine, which were known as the "refusal organizations," objected to the accords since those groups did not accept Israel's right to exist.

On both sides there was distrust of the other side's intentions.

Israelis suspected that the Palestinians were entering into a tactical peace agreement as part of the Ten Point Program (which is called in Israel Tokhnit HaSHlavim or Torat HaSHlavim). The Ten Point Program was considered the first attempt by PLO at a peaceful resolution, though the ultimate goal was "completing the liberation of all Palestinian territory, and as a step along the road to comprehensive Arab unity." As evidence they cited statements of Arafat's in Palestinian forums in which he compared the accord to the Khodeyba agreement that the prophet Muhammad signed with the sons of the tribe of Quraish, but eventually defeated in the Battle of Badr. Those statements were taken by Israelis as a historical-religious precedent for Arafat's intentions.

The Israelis' trust in the accords was further undermined by the intensification of terror attacks, which could be explained as an attempt by the terror organizations to thwart the peace process. Others believed that the Palestinian Authority had no interest in ceasing these attacks and was instead endorsing them. Hundreds of Israeli civilians died in suicide bomber attacks carries out by Palestinian organizations during the time of the Oslo Accords. Important sections of the Israeli public opposed the process; notably, the Jewish settlers feared that it would lead to them losing their homes.

The Israelis, on the other hand, intensified Israeli settlement expansion to five times its prior rate after the signing of the agreements, leading to frustration among many Palestinians and a general distrust of the accords and of Israeli intentions.

Fundamentally, there was not enough support on either side to implement the agreements. Ziyad Abu'Ein of Fatah expressed his dissatisfaction with the basic principles underlying the agreement during an interview on Alam TV July 4, 2006: "The Oslo Accords were not what the Palestinian people dreamt of. The dream of the Palestinian people is the return, self-determination, the establishment of an independent Palestinian state, and the liberation of its land. However, there would have been no resistance in Palestine if not for Oslo. It was Oslo that strongly embraced the Palestinian resistance. All the occupied territories - and I was one of the activists in the first and second Intifadas, and I was arrested by Israel several times… . If not for Oslo, there would have been no resistance. Throughout the occupied territories, we could not move a single pistol from one place to another. If not for Oslo, the weapons we got through Oslo, and if not for the "A" areas of the Palestinian Authority, if not for the training, the camps, the protection provided by Oslo, and if not for the release of thousands of Palestinian prisoners through Oslo - this Palestinian resistance could not have carried out this great Palestinian Intifada, with which we confronted the Israeli occupation." [1]

The Cave of the Patriarchs massacre is often blamed for destabilizing the Palestinians' trust in the process. The massacre occurred during the overlapping Jewish and Muslim religious holidays of Purim and Ramadan. The killings were perpetrated by Baruch Goldstein, a member of the extremist Kahanist movement. A total of 29 Palestinian Muslims were killed and another 125 injured, with Goldstein himself also being killed. In the aftermath, violent protests broke out across the Middle East and several dozen more Palestinians and Israelis were killed in clashes and attacks. Angry mobs began rioting in the aftermath of the massacre, which led to the deaths of 26 more Palestinians and 9 Israelis. All over the Middle East, people demonstrated and rioted, attacked Jewish communities, and staged protests. At one such protest in Amman, Jordan, 77-year-old British tourist Howard Long was stabbed by Palestinian protestors. The attacker, Khalid Husni Al-Korashi, was subsequently arrested and the Jordanian Interior Ministry called for its citizens to show calm and restraint in their response[2].

Also, the expansion of the settlements and blockades which caused the deterioration of economic conditions caused frustration and a corresponding drop in support for the accord and those who stood behind its ratification.

In addition to the first accord, namely the Declaration of Principles on Interim Self-Government, other more specific accords are often informally also known as "Oslo":

Additional Israeli-Palestinian documents related to the Oslo Accords are:

While benefitting a small elite, the conditions of most Palestinians worsened. This was seen as one of the causes for the al-Aqsa Intifada.