Old Havana (Spanish: La Habana Vieja) describes the central area of the original city of Havana, Cuba. Havana is a city of great architectural character, containing many treasures from the city's long and colorful history. Old Havana and its fortifications were designated a UNESCO World Heritage Site in 1982.

Following a royal Spanish decree by Philip II of Spain in 1561, all ships headed for Spain from the New World were required to assemble their fleets in Havana Bay in order to counteract pirate attacks on galleon convoys. This decree boosted commerce and development of the adjacent city of Havana. In 1563, the Spanish Governor of the island moved from Santiago de Cuba to Havana, marking the point when the city became Cuba's de facto capital. On December 20, 1592, King Philip II granted Havana the title of city. Later, the city would be officially designated as "Key to the New World and Rampart of the West Indies" by the Spanish crown. At the middle of the eighteenth century, Havana had more than 70,000 inhabitants. It was then the third largest city in the Americas, ranking behind Lima, Peru and Mexico City but ahead of Boston and New York City.

The colonial settlement of Havana thus played a significant role in the shaping of the Caribbean Sea region as well as much of South America. Old Havana's buildings are historical treasures and are architecturally important as well. Spanish colonial structures, Baroque churches, and buildings in Neoclassic style fill its narrow streets and alleyways. Although many of these historic treasures fell into ruin in the latter half of the twentieth century following the Cuban Revolution, many are restored. As part of the World Heritage Site program, they will be preserved and this legacy will be passed on to future generations. 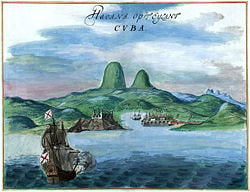 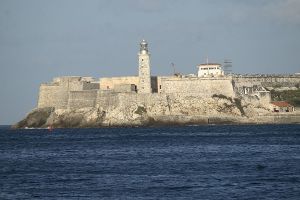 Spain established the city of Havana on the island of Cuba in 1519, one of the first cities in the western hemisphere to be founded by Europeans. The history of Havana spans three basic periods: the Spanish colonial period from 1519 to 1898; the American neocolonial period from 1898 to 1959; and the revolutionary period which began in 1960. The urban landscape clearly reflects elements of each of these periods.

It was the during the nearly 400-year colonial period that the core of the city was built in the Spanish colonial style. Its distinguished architecture led to it being designated a UNESCO World Heritage Site in 1982.

Havana's first settlement was built on the western edge of Havana Bay. Regular attacks by buccaneers, pirates, and French corsairs prompted the Spaniards to begin fortifying the city. Four imposing colonial forts constructed of coral-limestone flank Havana Bay. Two of these are at the entrance to the channel, on the north the Castillo del Morro (now a maritime museum) and on the south the Castillo de la Punta (now the Museum of Fortifications and Armaments). On the north side of the channel is the massive Fortaleza de San Carlos de la Cabana (now containing a museum of ceramic arts). On the channel's south side is the Castillo de la Real Fuerza.

In 1523, King Charles I of Spain mandated the Procedures for the creation of cities in the New World. These procedures indicated that after outlining a city's plan, growth should follow a grid centered on the square shape of the plaza. Havana's original central plaza is known as the Plaza de Armas. Surrounding this plaza were important military, political, and religious buildings. Castillo de la Real Fuerza was built adjacent to the plaza on its north side.

To counteract pirate attacks on galleon convoys headed for Spain, following a royal decree in 1561 all ships headed for Spain were required to assemble their fleets in the Havana Bay. Ships arrived from May through August, waiting for the best weather conditions, and together, the fleet departed Havana for Spain by September. By the seventeenth century the city had become one of the main ship-building centers in the New World.

Spain found it necessary to protect many of its colonial coastal cities from attacks by both pirates and foreign powers. From 1674 to 1797 walls were built around the city of Havana, enclosing an area of approximately three square kilometers (about 1 sq mi). In 1863 these walls were torn down to accommodate the growing city, which eventually expanded to about nine sq km (three sq mi).

While modern Havana has expanded beyond its original settlement, the narrow streets of Old Havana contain many buildings; monuments, forts, convents and churches, palaces, and alleyways that hold the history of its colonial days. Many structures fell into ruin in the latter half of the twentieth century, but a number are being restored. 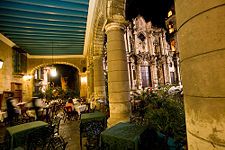 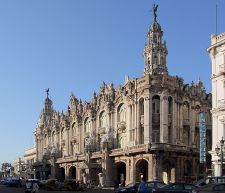 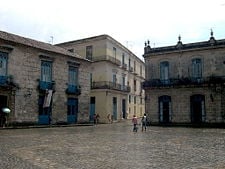 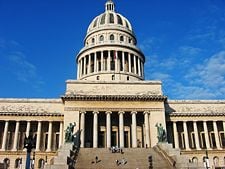 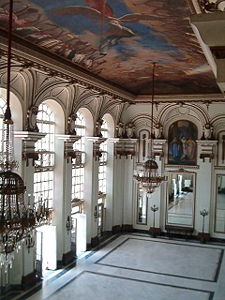 The ballroom in the former Cuban Presidential Palace, today the Museum of the Revolution in Old Havana

Retrieved from https://www.newworldencyclopedia.org/p/index.php?title=Old_Havana&oldid=1087876
Categories:
Hidden category:
This page was last edited on 18 November 2022, at 00:04.
Content is available under Creative Commons Attribution/Share-Alike License; additional terms may apply. See Terms of Use for details.