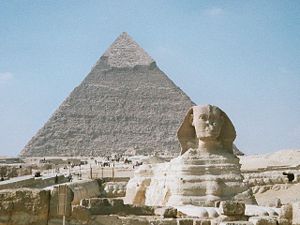 The Great Sphinx of Giza, with the Pyramid of Khafre. Both date from the Old Kingdom in the background

The Old Kingdom is the name commonly given to that period in the 3rd millennium B.C.E. when Egypt attained its first continuous peak of civilization, complexity, and achievement—this was the first of three so-called "Kingdom" periods, which mark the high points of civilization in the Nile Valley (the others being Middle Kingdom and the New Kingdom). Historians apply the term "kingdom" to periods of stability under successive rulers. Some of the most well known monuments, such as the Sphinx and Great Pyramid, were built during this period. The Old Kingdom—also referred to as the Age of the Pyramids, is most commonly regarded as spanning the period of time when Egypt was ruled by the Third Dynasty through to the Sixth Dynasty (2686 B.C.E.–2134 B.C.E.). Many Egyptologists also include the Memphite Seventh and Eighth Dynasties in the Old Kingdom as a continuation of the administration centralized at Memphis. The Old Kingdom was followed by a period of disunity and relative cultural decline referred to by Egyptologists as the First Intermediate Period, until strong central authority was restored by the Pharaohs of the Twelfth Dynasty, and the Middle Kingdom began. The royal capital of Egypt during the Old Kingdom was located at Memphis, where Djoser established his court. Belief in the Pharaoh’s divinity, a distinctive feature of this, time was balanced by the concept of Maat (daughter of Ra, goddess of truth and justice), justice or order, which it was his responsibility to uphold and effectively curbed excesses of his otherwise almost absolute power. This became a much stronger aspect of the Egyptian social system after the collapse of the Old Kingdom, when this was interpreted as a failure of moral behavior. Ascription of divinity to the king strengthened his ability to unify the kingdom, while ascription of an even higher order of divinity to "morality' made him accountable for his actions.

The first notable pharaoh of the Old Kingdom was Djoser (2630–2611 B.C.E.) of the Third Dynasty, who ordered the construction of a pyramid (the Step Pyramid) in Memphis' necropolis, Saqqara. An important person during the reign of Djoser was his vizier, Imhotep. Viziers were originally royal princes, and served as chief minister.

It was in this era that formerly independent ancient Egyptian states became known as nomes (Upper and Lower Egypt), ruled solely by the pharaoh. Subsequently, the former rulers were forced to assume the role of governors or otherwise work in tax collection. Egyptians in this era worshiped their pharaoh as a god, believing that he ensured the annual flooding of the Nile that was necessary for their crops. Egyptian views on the nature of time during this period held that the universe worked in cycles, and the Pharaoh on earth worked to ensure the stability of those cycles. They also perceived themselves as a specially selected people, "as the only true human beings on earth"[1]

The Old Kingdom and its royal power reached their zenith under the Fourth Dynasty, which began with Sneferu (2575–2551 B.C.E.). Using a greater mass of stones than any other pharaoh, he built three pyramids: A mysterious pyramid in Meidum (a failure), the famous Bent Pyramid in Dahshur (another failure), and the small Red Pyramid, also in Dashur. The period’s prosperity resulted from irrigation of the Nile and also from commerce and trade. The surplus wealth enabled the King to build these massive monuments because there was plenty of labor and materials available. The people cooperated—though slaves were also used—out of gratitude to the Pharaoh for ensuring the unity and stability of the Kingdom to the benefit of all, and because the land’s fertility was within his divine gift. On the other hand, even the Pharaoh was believed to be subject to Maat, the divine rule of universal justice and morality, which effectively prevented despotic rule.

Sneferu was succeeded by his son, Khufu (2551–2528 B.C.E.), who built the Great Pyramid of Giza, which remained the world's tallest building until the late nineteenth century. Later Egyptian literature describes him as a cruel tyrant, who imposed forced labor on his subjects to complete his pyramid. After Khufu's death, his sons Djedefra (2528–2520 B.C.E.) and Khafra (2520–2494 B.C.E.) may have quarreled. The latter built the second pyramid and (in traditional thinking) the Sphinx in Giza. Recent reexamination of evidence has suggested that the Sphinx may have been built by Djedefra as a monument to Khufu.

Golden Falcon Head discovered at ancient Hekhen in 1897/8, now in the Cairo Museum

The later kings of the Fourth Dynasty were king Menkaura (2494–2472 B.C.E.), who built the smallest pyramid in Giza, and Shepseskaf (2472–2467 B.C.E.). Exquisite art work has also survived from this period, such as the Falcon Head, "one of the masterpieces of the Cairo Museum" discovered at Hieroconpolis (ancient Nekhen) with a headdress of gold and eyes made of obsidian.[2] This may be the oldest known cult image.

The Pharaoh ruled by divine decree. A sophisticated central administration was divided into ministries, each headed by a vizier. Many of these, though, not all, were royal princes. The regions were governed through nomarchs, a post that over time became hereditary. Initially, the regional governors were also members of the royal family. While belief in the Pharaoh’s divinity and ability to control the Nile was a central motif of the political system, it was accompanied by motif of universal morality concept of Maat, or justice, of which the Goddess Maat was guardian in heaven and which it was the Pharoah’s responsibility to enforce on earth. Behind this concept was the idea of an ideal state and universal laws. This also served to curb excesses of his otherwise authoritarian power. The Old Kingdom’s collapse of in the sixth century was precipitated by famine, which resulted in the Pharaoh being blamed for failing to control the Nile—or for indifference towards his subjects, which compromised Maat. On the other hand, it is possible that the famines were partly caused by failures in administration, for which the Pharaoh could properly be blamed. As confidence in central authority declined, the local nomarchs were able to establish themselves as petty rulers and unity was lost. Historically, Egypt character always flourished when it was unified and declined when divided, so as central government collapsed so did the vibrant economy. Similarities with China are notable. China, too, flourished historically when unified and declined when divided.

There, too, was a strong centralizing tendency which was also mitigated by the concept of the “mandate of heaven” and of the ruler’s responsibility to uphold justice, and to act for the common good. The basic moral principles of Maat have been compared with Chinese ideas of order and justice. In Egypt, these concepts (usually numbered 42) were eventually codified in to a legal system, at least in part, as in the “Negative Confessions” in the Papyrus of Ani, commonly called the Egyptian Book of the Dead.[3]

The Fifth Dynasty began with Userkhaf (2465–2458 B.C.E.), who initiated reforms that weakened the Pharaoh and central government. After his reign, civil wars arose as the powerful nomarchs (regional governors) no longer belonged to the royal family, which meant that they did not feel too much loyalty and, as central authority weakened, could assert their autonomy. The worsening civil conflict undermined unity and which, together with climactic change, contributed to severe famines. The massive building projects of the Fourth Dynasty, especially under Khufu, may also have placed too much strain on the economy and populace, weakening the Kingdom at its roots.

The final blow appears to have been climactic—a sudden and short-lived cooling in the region that resulted in a drastic drop in precipitation between 2200 and 2150 B.C.E., which in turn prevented the normal flooding of the Nile. Fekri says that Lake Faiyum, 65 meters deep, totally dried up and that eventually the "Nile can be considered as the force which destroyed the civilization it nurtured."[4] The Old Kingdom collapsed, followed by decades of famine and strife. An important inscription on the tomb of Ankhtifi, a nomarch during the early First Intermediate Period, describes the pitiful state of the country when famine stalked the land.

While the concept of Maat was well established during the Old Kingdom, it appears to have been strengthened by the collapse of the SIxth dynasty, since reflecting on what had happened, Egyptians concluded that the catastrophe had been caused by neglecting Maat, which is essential for stability. Thus, Maat was "mainly recognized as such after the chaos of the Intermediate Period," when the catastrophe of collapse was depicted as typical of what happens when Maat was not "actively maintained by joint action of people, king, and the Gods."[5] Had the concept been stronger earlier, the Kingdom’s collapse might have been avoided.

Retrieved from https://www.newworldencyclopedia.org/p/index.php?title=Old_Kingdom_of_Egypt&oldid=1087877
Categories:
Hidden category:
This page was last edited on 18 November 2022, at 00:04.
Content is available under Creative Commons Attribution/Share-Alike License; additional terms may apply. See Terms of Use for details.