Egyptian Book of the Dead 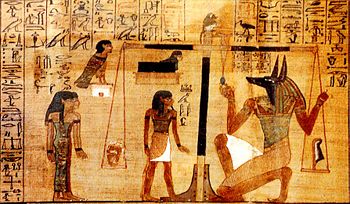 A Section of Plate 3 from the Papyrus of Ani. Plate 3 contains half of the first (and longer) instance of chapter 30B in Ani's Book of the Dead, which is titled: Chapter for not letting Ani's heart create opposition against him in the God's Domain. This vignette shows Ani's heart being weighed against a feather of Maat (Truth, Rightful Order). Thoth (baboon) is overseeing, and Anubis (Jackal headed god) is the "Guardian of the Scales." The three standing figures to the left are the three aspects of fate. The rectangular stone with a woman's head is one of the three aspects of fate. Ani's Ba (the human headed bird and one aspect of the soul) is perched on a shrine and is looking over the event which will determine his fate. This vignette is similar to vignettes that would be found associated with chapter 125 of the Book of the Dead, and an abbreviated version is, in fact, found in chapter 125 of the Papyrus of Ani.

The Book of the Dead is the common name for the ancient Egyptian funerary text known as The Book of Coming [or Going] Forth By Day. This text was both a description of the ancient Egyptian conception of the afterlife and a collection of hymns, spells, and instructions to allow the deceased to pass through obstacles contained therein. The Book of the Dead's second raison d'être (as an instructional text of sorts) lent it a sacramental function, as papyrus copies of it were often placed in the coffins or burial chambers of the deceased, with the intention that the dead could use them upon their respective resurrections.[1] One component of the text that has received extensive scholarly attention is a listing of the so-called "Negative Confessions," a moral litany that has been used to compare the ethical codes of the Ancient Egyptians to those of the early Jewish people.

The name "Book of the Dead" itself was the invention of the German Egyptologist Karl Richard Lepsius, who published a selection of the texts in 1842.

In a similar manner, the Book of the Dead itself was adapted into the Book of Breathing (a syncretistic funerary text) in the Late Period, but remained popular in its own right until the Roman occupation.[3]

Weighing of the heart

The first part of the Book of the Dead is typically a hymn to the Great God (usually Ra, Atum, or Horus), with the god Osiris representing the needs and concerns of the deceased human.[4] This is followed by the most critical moment in the book, the "weighing of the heart," a symbolic judgment of the person's character in which the weight of their heart is compared to a feather of Ma'at (the symbol of ethical action). If the deceased's heart is lighter than the feather, they are judged worthy and may proceed into the company of the gods. If the deceased is found unworthy, their hearts are devoured by the monster Ammit, after which point they either wink out of existence or are condemned to a shadowy existence between worlds.[5]

At this moment, the deceased could utter a spell to prevent their hearts from speaking out against them: [6]

O my heart which I had from my mother! O my heart of different ages! Do not stand up as a witness against me, do not be opposed to me in the tribunal, do not be hostile to me in the presence of the keeper of the balance, for you are my ka which was in my body, the protector who made my members hale. Go forth to the happy place whereto we speed, do not tell lies about me in the presence of the god; it is indeed well that you should hear!

If the deceased is judged worthy, the gods of the great Ennead respond thusly:[7]

This utterance of yours is true. The vindicated Osiris-[name] is straightforward, he has no sin, there is no accusation against him before us, Ammit shall not be permitted to have power over him. Let there be given to him the offerings which are issued in the presence of Osiris, and may a grant of land be established in the Field of Offerings as for the followers of Horus.

The rest of the text describes the mythic origin of the gods and places, spells for protection of the deceased and his journey through the underworld to join the company of the gods. On the way, the deceased must address the various guardians with a secret name and supply cryptic passwords to enter, for example:[8]

The third gate: the name of its gatekeeper is 'One who eats the Putrefaction of his Posterior'; the name of its guardian is 'Alert of Face'; the name of the announcer in it is 'Gateway'.
Words spoken by the Osiris-[name], the justified, when arriving at the gate: 'I am the secret one of the cloudburst, the one who separated the Two Companions. It is in order that I might drive away evil from Osiris that I have come. I am the one who clothed his own standard, who emerges in the Wereret-Crown. I have established offerings in Abydos. Open the way for me in Rosetjau because I have relieved the sickness in Osiris. I have painted his perch. Make way for me so that he might shine in Rosetjau.'

The sometimes cryptic material in the Book of the Dead was seen to correspond to the mysterious and unknowable nature of the afterlife, into which the deceased hoped to be admitted. This being said, the existence of the Book was itself a talisman against the unknowable dangers of this posthumous journey:

Knowledge "socialized" the deceased in a realm that was conceived of as a community. It identified him to those in the afterlife as one of them and lent him power over demons who could be dangerous to him. Knowledge of the netherworld conferred a nether-worldly identity on him as a "holy god in the following of Thoth," the god who was the guide of souls and the learned one, the quintessential knowing one.[9] 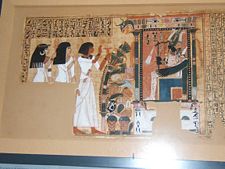 In addition to (or, in some version, in concert with) the "weighing of the heart," the Book of the Dead also contained an extensive formula of ritualized confessions, through which the deceased individual asserted their adherence to the laws of Ma'at. In one example of the so-called "negative confessions" found in the text, the deceased addresses each of 42 cryptically named gods in turn, while declaring his/her avoidance of particular transgressions:[10]

The content of some of the statements of denial or the 'negative confession' has led some scholars to hypothesize that they may be the basis for the Biblical Ten Commandments.[11] This being said, Zivie-Coche argues that the traditional description of these texts as "confessions" is somewhat misleading, as "here it was not a matter of a repentant sinner confessing all his sins so that he might be pardoned, but rather a matter of declaring with the confidence of an innocent person that the list of sins against Maat, which was codified and conceived of as exhaustive, had not been committed by him."[12]

The earliest known versions date from the sixteenth century B.C.E. during the New Kingdom, eighteenth Dynasty (ca. 1550 - 1292 B.C.E.). It partly incorporated two previous collections of Egyptian religious literature, known as the Coffin Texts (ca. 2000 B.C.E.) and the Pyramid Texts (ca. 2600 B.C.E. - 2300 B.C.E.), both of which were eventually superseded by the Book of the Dead. The Book of the Dead for Scribe Ani, the Papyrus of Ani, was originally 78 ft (28 m), and was separated into thirty seven sheets at appropriate chapter and topical divisions.

The text was often individualized for the deceased person, so no two copies contain the same text. However, "book" versions containing similar features are generally categorized into four main divisions – the Heliopolitan version, which was edited by the priests of the college of Annu (used from the 5th to the 11th dynasty and on walls of tombs until about 200); the Theban version, which contained hieroglyphics only (20th to the 28th dynasty); a hieroglyphic and hieratic character version, closely related to the Theban version, which had no fixed order of chapters (used mainly in the 20th dynasty); and the Saite version which has strict order (used after the 26th dynasty).[13]

Early versions of the Book of the Dead were not standardized and were not organized by thematic content; however, this changed by the Saite period, when the following ordering became universalized:[14]

Books were often prefabricated in funerary workshops, with spaces being left for the name of the deceased to be written in later. They are often the work of several different scribes and artists whose work was literally pasted together. The cost of a typical book might be equivalent to half a year's salary of a laborer, so the purchase would be planned well in advance of the person's death. The blank papyrus used for the scroll often constituted the major cost of the work, so papyrus was often reused.

Images, or vignettes to illustrate the text, were considered mandatory. The images were so important that often the text is truncated to fit the space available under the image. Whereas the quality of the miniatures is usually done at a high level, the quality of the text is often very bad. Scribes often misspelled or omitted words and inserted the wrong text under the images. [16]