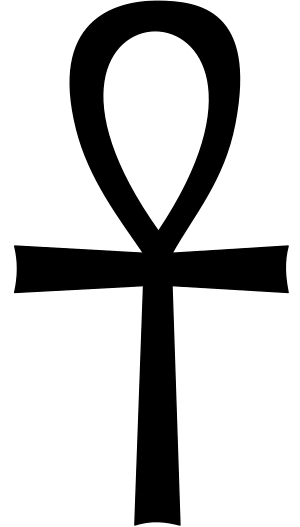 The ankh is the Egyptian hieroglyphic character that means life or living. Ancient Egyptian gods are often portrayed carrying it by its loop, or bearing one in each hand with their arms crossed over their chest. It is also known as the Egyptian Cross, or as crux ansata, Latin for "cross with a handle."

The ankh appears frequently in Egyptian tomb paintings and other art, often representing deities of the afterlife. An ankh was often carried by Egyptians as an amulet, either alone, or in connection with two other hieroglyphs that mean "strength" and "health." Mirrors were often made in the shape of an ankh.

Over time the ankh has come to symbolize life and immortality. In Egyptian art, gods were sometimes portrayed touching a mortal with an ankh, symbolizing conception, or conferring the gift of life on a dead person's mummy. Its key-like shape encourages the belief that it unlocks the gates of death, and it is viewed this way by the modern Rosicrucians and other hermetic orders. Coptic Christians have used it as a symbol of life after death.

The is no single definitive interpretation of the ankh symbol by Egyptologists. Unlike most Egyptian sacred images, the ankh did not represent a human-like god with the head of an animal or the disk of the Sun, but a pure symbol of deity, the giver of life. 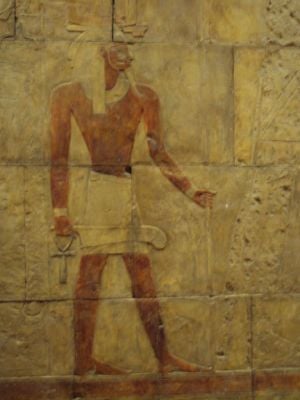 Diverse theories for the origins of the ankh include the view propounded by E. A. Wallis Budge that the ankh might have originated as the belt-buckle of the mother goddess Isis. This hypothesis was supported by Wolfhart Westendorf with the notion that both the ankh and the "Knot of Isis" were used as ties on ceremonial girdles. Sir Alan Gardiner speculated that it represented a sandal strap, with the loop going around the ankle. The word for sandal strap was also spelled ʿnḫ, although it may have been pronounced differently.[2]

Still other theories include the notion that the ankh represents the sun crowning over the horizon and thus represents regeneration, re-growth, and renewal.[3] The ankh does appear frequently in Egyptian tomb paintings and other art, often at the fingertips of a god or goddess in images that represent the deities of the afterlife conferring the gift of life. Additionally, an ankh was often carried by Egyptians as an amulet, either alone, or in connection with two other hieroglyphs that mean "strength" and "health."

It is also believed to represent the path of the sun from east to west with the loop representing the Nile River, a stylized person, or a combination of the male and female symbols of Osiris (the cross) and Isis (the oval), and therefore signifies the union of heaven and earth. Together these symbols reflect a continued existence.[4] The ankh was almost never drawn in silver because the ankh is associated with the Sun, and gold is the metal of the Sun.

The ankh appeared in the name of King Tutankhamun, meaning the "Living Image of Amun," who was Pharaoh of the Eighteenth Dynasty (ruled 1333 B.C.E.–1324 B.C.E.).

Hermeticism is a belief system that unifies many of the ankh's meanings and may have originated in Egypt. It is unclear whether the Hermetics created the ankh or simply added many meanings. Their concept of God was The All, who purportedly claimed: "Onus, God, being male and female, beginning as life and light, gave birth, by the Word, to another Onus, the Creator of the world" (Salaman, 2000).

If the interpretation that the ankh suggests the joining of the masculine and feminine is correct, with the top opened up to look similar to a representation of the female genitals and the bottom shaft being a phallic symbol, then the rest may follow. If God is both male and female, the ankh is a symbol of hermaphrodites and can represent God. It also can be representing reproduction as both genitalia are pictured, with Onus having given birth.[5]

The Ankh and the Cross

The Christian cross, which is today one of the most widely recognized symbols in the world, was not commonly used as a symbol during the first two and a half centuries after the death of Jesus. This was the case because the cross as a means of execution had been used by the Roman Empire for killing slaves and enemies of Rome. In Egypt, however, the indigenous religious symbol containing a cross, the ankh, was a general symbol of a “primal” deity. The ankh became a way that the cross could be pictured without insult to the memory of Jesus. An example of the ankh in transition was discovered in the Fayaom Oasis region on a third century Christian bust, excavated in the 1960s.[6]

The ankh was gradually adopted by the fourth century Christian church in Egypt, which eventually became the Coptic church. It was used as a symbol of life after death.[7]

Elsewhere, the main Christian symbol at the time had been a stylized alpha, resembling a fish, and therefore known as Ichthys, the Greek word for “fish.” However, the new "more positive" symbol of a cross eventually spread throughout the Christianized Empire. The distinct circular or "gothic arch-like" upper part of the Ankh was kept well into medieval times. The Ankh symbol has often been used as a Christian talisman.[5]

The Ankh in Modern Culture

The ankh is one of the best and most widely known symbols of ancient Egypt and it is often used as the graphic synonym for this ancient culture. Due to this context, as well as due to the fact that many pictures of Egyptian gods and goddesses contained the symbol ankh in their hands, this symbol was adopted as a symbol of modern religion called Kemetism (or Egyptian Neopaganism), the contemporary revival of Ancient Egyptian religion emerging from the 1970s onwards.

Many neo-pagan, New Age, and pagan sects wear the ankh as a symbol of power and wisdom or to show that they honor the Egyptian pantheon. It is commonly seen in jewelry such as rings and necklaces, and despite its earlier uses it is cast in silver rather than gold or copper.

Hippies of the 1960s and 1970s wore it as a life-affirming sign indicating their disdain for materialism.

In Gothic subculture the ankh is a symbol associated with vampires.[8] Jhonen Vasquez is known to have used the symbol in mockery of the gothic subculture of today in his work Johnny the Homicidal Maniac. The ankh was worn by David Bowie and Catherine Deneuve as a gold pendant, the bottom part concealing a knife used for blood drinking, in the 1983 film The Hunger, based on Whitley Strieber's novel of the same title.

Elvis Presley wore an ankh necklace during his concert documentary Elvis on Tour while wearing the Blue Nail Jumpsuit. He was also known to wear the Christian Cross and the Jewish Chai. He once remarked, "I don't want to miss out on Heaven because of a technicality."[9]