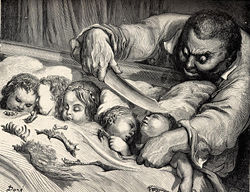 The Ogre from Hop o' My Thumb illustrated by Gustave Doré

An ogre (feminine: ogress) is a large and hideous humanoid monster, a mythical creature often found in fairy tales and folklore. While commonly depicted as an unintelligent and clumsy enemy, it is dangerous in that it feeds on its human victims. The idea of the ogre has been used as a method of instilling good behavior in children by suggesting that bad behavior attracted and excited ogres, who would then attack, kidnap, or even eat the perpetrator. Some authors, however, choose to show ogres in a somewhat brighter light, saying they are both shy and reclusive. Today, variants of ogres can be found in modern fantasy popular culture, such as in video and role-playing games, as well as in popular fiction.

A school of thought suggests that, like trolls, ogres originated in knowledge, if not memories, of Neanderthal humans. Whatever their origin, ogres represent that which is somewhat peculiar and different, and thus potentially dangerous, yet there is no denying their similarity to humans. The appearance of ogres in literature, art, and other cultural forms may reflect the desire to embrace, yet at the same time the fear of, those who are different. In more recent times, the image of the ogre has become less threatening, indicating humanity's growing ability to accept and reconcile with those previously feared on account of their differences. 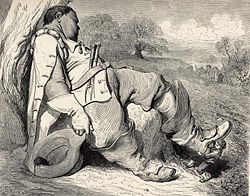 The word ogre is spelled the same in English as it is in French, where it originates. The word ogre is quite possibly a derivative of the Italian orgo, which is a later function of orco, which translates as "demon."[1] It probably ultimately derives from the Latin Orcus, Roman god of the underworld.

The idea of this type of mythical creature gained popularity with its use by French author Charles Perrault in the 1696 publication Tales of Mother Goose, which laid foundations for a new literary genre, the fairy tale, and whose best known tales include Le Chat botté (Puss in Boots) and Le Petit Poucet (Hop o' My Thumb), both of which feature ogres. In more modern times, the word is sometimes used as an adjective: Ogreish refers to anyone who possesses characteristics of an ogre and is often used in a negative context.

Ogres are often characterized by their large, often disproportionate features: Depending upon the culture, ogres can be several times the size of a human being, or only a few feet taller. They are usually solidly built, with rounded heads, a large stomach and abundant and hirsute hair and beard. They often have large mouths full of prominent teeth, are distinguishable for their ugliness, and are accompanied by a horrific smell. Their skin is said to be rough and a dull earth-tone in Europe, while in Asia their skin can sometimes be a vibrant red or orange. 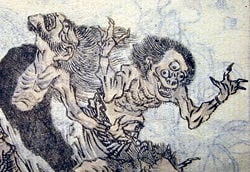 Katsushika Hokusai, detail of a Japanese print showing two oni, one with one eye and one with three eyes.

The Japanese oni are usually portrayed as hideous, gigantic creatures with sharp claws, wild hair, and two long horns growing from their heads. Occasionally, they are shown with unnatural features, such as odd numbers of eyes or extra fingers and toes. Their skin may be any number of colors, but blue, black, purple, pink, brown, green, white, and especially red, are particularly common. Their fierce appearance is only enhanced by the tiger-skin loincloths they tend to wear and the iron clubs they favor, called kanabō (金棒, kanabō). This image leads to the expression "oni with an iron club" (鬼に金棒, oni-ni-kanabō), that is, to be invincible, or "strong beyond strong," having one's natural quality enhanced.

The idea of the ogre often overlaps with that of giants and trolls, so it is conceivable that all three mythical creatures have similar origins.

Did you know?
Some scientists have suggested that ogres may have been Neanderthals, an extinct species of hominids that inhabited Europe and parts of western Asia.

Some scientists have suggested that these creatures may have been Neanderthals, an extinct species of hominids that inhabited Europe and parts of western Asia. Spanish paleoanthropologist Juan Luis Arsuaga, has theorized, based on fossil evidence, that Neanderthals and Cro-Magnons occupied the same area of Europe at the same time.[2] The distinguished Swedish-speaking Finnish paleontologist Björn Kurtén has also entertained this theory, fusing knowledge and imagination to suggest that trolls and ogres are a distant memory of an encounter with Neanderthals by Homo sapiens' Cro-Magnon ancestors some 40,000 years ago during their migration into northern Europe.[3] As new fossil evidence comes to light in Asia, it is conceivable that Asian beliefs in ogres could also be contributed to a collectively shared memory of human ancestors.

Another explanation for the ogre myth is that the ogres represent the remains of the forefather-cult which was ubiquitous in Scandinavia until the introduction of Christianity in the tenth and eleventh centuries. In this cult the forefathers were worshiped in sacred groves, by altars, or by grave mounds. They believed that after death a person's spirit continued to live on, or near, the family farm. This particularly applied to the "founding-father" of the estate, over whose body a large haugr, or burial mound, was constructed.[4] This revered ancestor's spirit remained "living" in his mound, a guardian over the property. This guardian was treated with an awed, if not fearful, respect. He resented the slightest liberty that might be taken on, or near, his resting place. Children playing nearby would cause great outbursts, hence the idea that ogres ate children. With the introduction of Christianity however, the religious elite sought to demonize the pagan cult, and denounced the all worship or respect for such "mound-dwelling" spirits as evil. 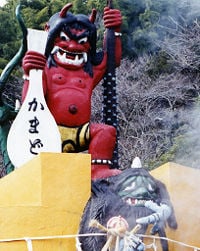 A Japanese aka-oni, or "red ogre," vanquishes demons at an onsen in Beppu 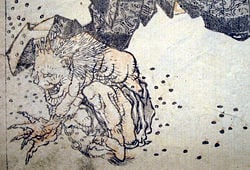 Katsushika Hokusai, detail of a Japanese print showing an oni being chased away by scattered beans.

According to the folklore and mythology of the peoples of Northern Europe, ogres live in the far corners of forests and mountains, sometimes even in castles. They are almost always incredibly large and stupid, being easily out-witted by humans. They are not always malicious; while there are stories of ogres that kidnap and eat children, terrorize villages, and even guard hordes of treasures or mystical secrets, they are sometimes considered merely shy and reclusive.

Certain Asian cultures have stories with creatures resembling ogres. Many Japanese fairy tales inspired by mythology and religion include the oni, a creature popularly associated with the ogre. Momotaro ("Peach Boy"), is one example, including the appearance of blue, red, and yellow oni with horns and iron clubs. Some villages hold yearly ceremonies to drive away oni, particularly at the beginning of spring. During the spring Setsubun festival, people throw soybeans outside their homes and shout "Oni wa soto! Fuku wa uchi!" ("Demons out! Luck in!" "鬼は外！福は内！"). In more recent times, oni have lost some of their original wickedness and sometimes take on a more protective function. Men in oni costumes often lead Japanese parades to ward off any bad luck.

Ogres also appear in tribal cultures. Pygmy mythology includes the tale of Negoogunogumbar, an ogre who devours children. Many Ogre-like creatures are also found in Native American tribal traditions and are usually in the form of man-eating giants. They are often linked to legends of bigfoot.

The idea of the ogre may also be used metaphorically in contemporary culture, as a dictator who controls and exploits others, and thus devours them, or as a seducer devouring his or her victims. This type of usage is seen in the association of ogres with Nazis made in Michel Tournier's 1970 novel Le Roi des Aulnes (The Erl King or The Ogre). 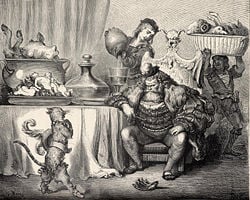 "Puss in Boots" outwits the Ogre by Gustave Doré

Children's literature is fraught with tales mentioning ogres and kidnapped princesses who were rescued by valiant knights and, sometimes, peasants. In the classic tale, Puss in Boots, a cat outwits a shape-changing ogre.

Other fairy tales involving ogres include Motiratika, Tritill, Litill, and the Birds, Don Firriulieddu, Snow-White-Fire-Red, Shortshanks, Thirteenth, and Don Joseph Pear. Ogres are also popular in fantasy fiction, such as C.S. Lewis's The Chronicles of Narnia. Piers Anthony's Xantha series, the Spiderwick Chronicles, Tamora Pierce's The Tortall Universe, and Ruth Manning-Sanders' A Book of Ogres and Trolls are just a few of the popular works of fiction that incorporate ogres in their stories.

Not all ogres in modern popular culture are fearsome—the title character from the highly successful film Shrek and its sequels is an ogre. Shrek is not depicted as a stereotypically hostile ogre; he is no villain, but rather a solitary ogre who lives in a swamp and prefers not to be disturbed. When called on, though, he becomes the hero and wins the love of the princess, who also turns out to be an ogre.