The approximate extent of the Magadha state in the 5th century B.C.E.

Magadha (मगध) formed one of the sixteen Mahājanapadas (Sanskrit, "great countries"), or regions, in ancient India. The core of the kingdom was the area of Bihar south of the Ganges River. Its capital was Rajagaha, known as modern day Rajgir. Magadha expanded to include eastern Uttar Pradesh, most of Bihar, and Bengal with the conquest of Licchavi and Anga. The Sanskrit epics Ramayana and Mahabharata, and the sacred text Puranas all mention the ancient kingdom of Magadha. Buddhist and Jain texts frequently mention it. The earliest reference to the Magadha people occurs in the Atharva-Veda, listed along with the Angas, Gandharis, and Mujavats as despised peoples. The Magadha kingdom included republican communities such as the community of Rajakumara. Villages had their own assemblies under their local chiefs called Gramakas. Their administrations were divided into executive, judicial, and military functions.

The Śiśunāga dynasty ruled Magadha for more than two hundred years from circa 684 B.C.E. to 424 B.C.E. Two of India's major religions, Jainism and Buddhism, trace their beginnings to Magadha. During that time Siddhartha Gautama was born in Kosala around 563 B.C.E. Magadha served as the backdrop for Buddha's life and the region is revered by Buddhists. Jains, as well, hold the region sacred. To Jains, Magadha was the scene of Vardhamana Mahavira's life, the twenty-fourth Tīrthaṇkaras of Jainism (599–527 B.C.E.). 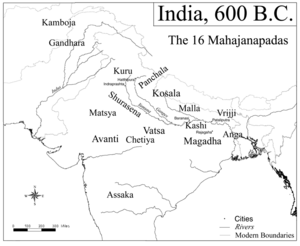 The Magadha state circa 600 B.C.E., before it expanded

The kingdom of the Magadha roughly corresponds to the modern districts of Patna and Gaya in southern Bihar, and parts of Bengal in the east. It was bounded on the north by the river Ganga, on the east by the river Champa, on the south by the Vindhya mountains and on the west by the river Sona. During the Buddha’s time and onward, its boundaries included Anga. Modern Bihar in Eastern India may have became Magadha only after the Ashokan period.[1] Ashoka's Bairat edict, far from Bihar, constitutes the earliest epigraphic record that mentions Magadha. Magan in western Baluchistan may well have been the ancient Magadha. The Sumerian records mention Dilmun, Magan, and Melukhkha, showing Magan nearer to Sumer than Melukhkha. The name Mogadham, common among Iranians, hints that Magadha once had been in western Baluchistan area of India. The Sisunaks of Magan were the Sishunagas. The Kak-kings like Kak-Siwe-Tempti were the Kakavarnas.[2]. Patali (28°19'58" La., 57°52'16" Lo.), sitting near Kohnouj and Konarak in the Gulf area, had been the Palibothra of Megasthenes.[3]

Little reliable information survives on the early rulers of Magadha. The Puranas, the Buddhist Chronicles of Sri Lanka, and other Jain and Buddhist texts, such as the Pali Canon constitute the most important sources. Based on those sources, it appears that the Śiśunāga dynasty ruled Magadha for approximately 200 years, c. 684 B.C.E.-424 B.C.E. Siddhartha Gautama had been born a prince of Kapilavastu in Kosala around 563 B.C.E., during the Śiśunāga Dynasty. As the scene of many incidents in his life, including his enlightenment, Buddhists traditionally consider Magadha a blessed land.

King Bimbisara of the Śiśunāga Dynasty led an active and expansive policy, conquering Anga in West Bengal. Prince Ajatashatru killed his father, King Bimbisara. King Prasenajit, king of neighboring Kosala and father-in-law of King Bimbisara, revoked the gift of the Kashi province, triggering between Kosala and Magadha. Ajatashatru was trapped by an ambush and captured with his army. King Pasenadi allowed him and his army return to Magadha, and restored the province of Kashi. King Pasenadi also gave his daughter in marriage to the new young king.

Accounts differ slightly as to the cause of King Ajatashatru's war with the Licchavi republic, an area north of the river Ganges. It appears that Ajatashatru sent a minister to the area who for three years worked to undermine the unity of the Licchavis. To launch his attack across the Ganga River (Ganges), Ajatashatru built a fort at the town of Pataliputra. Torn by disagreements, the Licchavis fell easily in defeat once the fort had been constructed. Jain texts tell how Ajatashatru used two new weapons: A catapult and a covered chariot with swinging mace that has been compared to a modern tank. Pataliputra began to grow as a center of commerce and became the capitol of Magadha after Ajatashatru's death.

Mahāpadma Nanda, the first of the so-called Nine Nandas (Mahapadma and his eight sons) overthrew the Śiśunāga dynasty in 424 B.C.E. The Nanda Dynasty ruled for about 100 years. In 326 B.C.E., the army of Alexander the Great approached the boundaries of the Magadha. The army, exhausted and frightened at the prospect of facing another giant Indian army at the Ganges, mutinied at the Hyphasis (modern Beas) and refused to march further East. Coenus, his key aide, persuaded Alexander to return and turn south, conquering their way down the Indus to the Ocean.

Around 321 B.C.E., the Nanda Dynasty ended and Chandragupta became the first king of the great Mauryan Dynasty and Mauryan Empire. The Empire later extended over most of Southern Asia under King Asoka, at first known as "Asoka the Cruel" but later became a disciple of Buddhism and became known as "Dhamma Asoka." In time, the Mauryan Empire ended and the Gupta Empire began. The capital of the Gupta Empire remained Pataliputra, in Magadha.

Among the sixteen Mahajanapadas, Magadha rose to prominence under a number of dynasties that peaked with the reign of Asoka Maurya, one of India's most legendary and famous emperors.

The Pradyotas, who according to the Vayu Purana ruled for 138 years, succeeded the Brihadrathas. One of the Pradyota traditions was for the prince to kill his father to become king. During that time, high crimes reportedly took place in Magadha. The people rose up and elected Shishunaga to become the new king, which destroyed the power of the Pradyotas and created the Shishunaga dynasty.

According to tradition, the Shishunaga dynasty founded the Magadha Empire in 684 B.C.E., with its capital in Rajagriha, later Pataliputra, near the present day Patna. That dynasty lasted till 424 B.C.E., when the Nanda dynasty overthrew it. That period saw the development of two of India's major religions that started from Magadha. Gautama Buddha in the sixth or fifth century B.C.E. founded Buddhism, which later spread to East Asia and South-East Asia, while Mahavira revived and propagated the ancient sramanic religion of Jainism.

The Nanda Empire at its greatest extent

The Nanda dynasty was established by an illegitimate son of the king Mahanandin of the previous Shishunaga dynasty. Mahapadma Nanda died at the age of 88, ruling the bulk of this 100-year dynasty. The Nandas were followed by the Maurya dynasty.

The Maurya Empire at its greatest extent

In 321 B.C.E., exiled general Chandragupta Maurya founded the Maurya dynasty after overthrowing the reigning Nanda king Dhana Nanda to establish the Maurya Empire. During that time, most of the subcontinent united under a single government for the first time. Capitalizing on the destabilization of northern India by the Persian and Greek incursions, the Mauryan empire under Chandragupta not only conquered most of the Indian subcontinent, but also pushed its boundaries into Persia and Central Asia, conquering the Gandhara region. Chandragupta was succeeded by his son Bindusara, who expanded the kingdom over most of present day India, barring the extreme south and east. 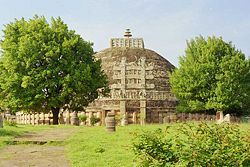 The Buddhist stupa at Sanchi, built during the Mauyran period.

Only present day Tamil Nadu and Kerala (a Tamil kingdom then) fell outside the rule of the Mauryans. References exist in one of the oldest Tamil Sangam literature, Purananuru, that a unified Tamil army under the leadership of Ilanchetchenni, a Chola King drove out a Mauryan army. According to one of his inscriptions, King Kharavela, a Kalinga ruler, defeated that unified Tamil force. His son, Ashoka The Great, who initially sought to expand the kingdom, inherited the kingdom. In the aftermath of the carnage caused in the invasion of Kalinga, he renounced bloodshed and pursued a policy of non-violence or ahimsa after converting to Buddhism. The Edicts of Ashoka constitute the oldest preserved historical documents of India, and from Ashoka's time, approximate dating of dynasties became possible. The Mauryan dynasty under Ashoka spread Buddhist ideals across the whole of East Asia and South-East Asia, fundamentally altering the history and development of Asia as a whole. Ashoka the Great has been described as one of the greatest rulers the world has seen. 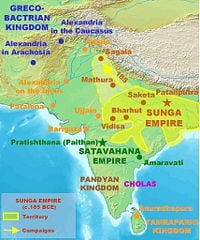 Extent of the Sunga Empire

The Gupta dynasty, ruling from 240 to 550 C.E., had been one of the largest political and military empires in ancient India. Most historians refer to the Gupta age as the Classical age of India. The time of the Gupta Empire proved an Indian "Golden Age" in science, mathematics, astronomy, religion, and philosophy.

They had their capital at Pataliputra. The Gupta and Mauryan administrative structure differed. In the Mauryan administration power centralized while in the Gupta administration, power decentralized. The king occupied a powerful and important position and often took titles to assert his supremacy. A council of ministers and some officials helped him. The empire divided into provinces, with the provinces further divided into districts. Villages represented the smallest units. The kingdom covered Gujarat, North-east India, south-eastern Pakistan, Orissa, northern Madhya Pradesh, and eastern India.

Art and architecture flourished during the Gupta age. People, mostly Vaishnavas, built temples devoted to Shiva and Vishnu during that period. Early temples had a large room where the statue of the god stood. Today those exist in Deogarh in Jhansi. Temples were mostly made of brick or stone. The doorways were very decorative. Wall murals flourished during that age. These can be seen in Ajanta caves which are about 100 kilometers from Aurangabad. Those murals depict the life of Buddha. Brahmins performed Yajnas. All forms of worship were carried out in Sanskrit. Astronomy and mathematics made rapid strides, led by Aryabhatta and Varahamihira. Aryabhatta stated that the earth moved round the sun and rotated on its own Axis.

Metallurgy, too, made rapid strides. The Iron Pillar near Mehrauli on the outskirts of Delhi provides proof. Ayurveda was known to the people of Gupta age. Prosperity and contentment had been the order of the day. Most people lived in villages and led a simple life. Rest houses and hospitals were set up. Laws were simple and punishments lenient. A serious flaw existed. The bad, inhuman treatment of the Chandalas or Untouchables. They were made to live outside the city, even their shadows considered polluting. Kalidasa's works (that is, Raghuvamsa, Meghdoot, Malavikagnimitram, and Abhinjnana Shakuntalam), works of Fa-hein, the Chinese buddhist scholar, Allahabad pillar inscription called Prayag Prashsti, and books by Harisena constitute The sources for knowledge during that era.